Lookit what else we found! 😀

It’s READY!!!! Okay true, I’m still hunting bargains and recommendations and adding ’em on as we speak, but: 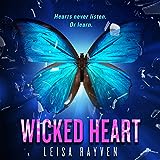 The list is ready… all the new releases, and OMG… something TOTALLY weird. Wicked Heart by Leisa Raven (author of Bad Romeo and Broken Juliet) is only coming out on May 17th… BUT!!!!!!! THE AUDIOBOOK IS ALREADY OUT!!!

How’s that possible. Who cares? THAT IS SO COOL!! 😀 It’s like an early preview.. but in listening mode. 😉

What looks extra exciting to me? Well that one up there to the left, (Never Let You Go) ’cause now it’s a “complete duet” and it’s listed as a psychological suspense, and of course… the fact that it mentions “forbidden” has me all a flutter. *snort* 😛 And A Court of Mist and Fury (also one that I need to read #1 first, but I hear it rocked worlds, so I’m in!!). Sustained (okay that’s not a new one, but it’s super-bargain priced, and so many here loved it like crazy, so I one-clicked it), Last Mile (She’s an undercover cop, falling for the biker she’s investigating), Fighting Fate (Her ex-best friend is a famous MMA fighter, but she ruined everything… and he’s a changed man now), Spinning Out (football star falling for his best friend’s girl that is LIVING IN THEIR HOUSE!!!! YIKES!!!) and Blood & Rust (she’s a med student and she followed a mob guy into an alley, and got caught). *gasp*!!! read more

<— P.S. That one to the left? Burning up the Amazon charts right now!! HOT and steamy sounding, and with a title like that, I can just imagine… 😉 read more

Atticus <— JUST WENT LIVE!
I do love a good ghost story, whether it be ghost-horror or ghost-romance! I’ve read a few ghost stories that were full terrifying (evil ravaging ghosts) or… ghost-loves-human-gone wrong (eeeeeep!!), or ghost-loves-human/love-conquers-all (despite the er… “physical” differences). And I’m into ALL of ’em. I was anticipating that this one was going to tickle at least one of my ghost-fancies, for sure. 😉

But to tell you the truth, since I’m a romance addict, I’m a sucker for a true ghost-love story. Trying to overcome the obvious obstacles that a romance like that would face? SO FUN!! I mean, come on… did you see that gorgeous guy on the cover? Oh yes. I was SO in before I even started. Such promise of intensity. read more

New release in this series!! It can be read as a standalone, but the author recommends reading the first two books before it. I absolutely loved another book this author wrote a few years ago (called Room 212, which she indicates also “compliments” this series). VERY COOL!!

Stacy:  This is my favorite book of 2016!! Absolutely amazing!

Pia: I read Room 212 some time ago, and it is still one of my favorites. Kate Stewarts other book – Never Me – is just as good. read more