The Darkest Pleasure (Hqn)
Reyes… Reyes, Reyes, Reyes. Reminded me somewhat of “Z” (from BDB series) so I ummm… kinda, put my brain picture of “Zsadist” and superimposed it onto Reyes. Not bad, if I do say so myself. Made for a mighty enjoyable read, and kinda like re-reading Z’s story (okay, maybe Z’s cousin or something). Oh, did I ever tell you I did that with “Tegan” from the Midnight Breed series? Yeah… if the hero has “Z-like” qualities, my “Z” image becomes the default in my head 😉

So anyway, the main story, is a little complicated, and yet, very easy to follow (but not as easy to write about). There are so many twists and turns and little revelations that sprout up as the series progresses, but they fall into place well.

In this installment, Reyes is still pining over a girl (Danika) that he helped kidnap in book one. Yup. Kidnap! Stockholm syndrome (well, maybe a little). That’s always fun!

In the first book, one of the “Lords of the Underworld” was required by the “gods” to kill off four related females. No reason why, it just had to happen. Well, Aeron (the lord required to do this), carries the demon of “Wrath”. He needs to kill, but doesn’t do it indiscriminately. He appears to kill only those that deserve it. It appeases his demon, and the world becomes a  better place. Hey! Kinda like Dexter!

But…. this case is different. These woman aren’t bad. The “lords” don’t wanna kill them, ’cause despite being possessed by demons, they are good guys all around, and they had no real reason to kill them. So the next best thing. Kidnap ’em. That happened in book one, and I can’t exactly remember why they decided kidnapping them was the best option? I don’t know.. keep your friends close, and your enemies closer? Could that be it? No… that’s not it. Maybe I forgot because all of the hot stuff from book one overheated my brain? What’s the hottest body temperature a brain can withstand anyway? Ahhhh nevermind 😉

So anyway, Reyes (the main “hero” in this book) and Danika form a strange bond in the first book. Not that anything actually happened between ’em, but for some reason, she feels he’s the only one she can trust amongst the men. He’s the only one that makes her feel safe, despite the fact that he yells at her, locks her in a room, and then forces her to fly away in the clutches of her would-be killer (Aeron, who is desperately trying to restrain himself), to get a dying girl (Ashlyn – Maddox’s girl) some Tylenol. Tylenol? Yes. I don’t know 🙄 They’re ancient, and don’t get humans, and that was the first thing that popped into Danika’s head that might “help” the ailing Ashlyn. Tee hee! I just went with it. Confused yet? Don’t be. It’s better when you read it.

All that to say, that here we are in book# 3, (the women were previously released by the Lords) with instructions to run and hide (since Aeron was struggling with his need to kill them). Now the women are suffering for it (living in poverty, and constantly being chased, always in danger).

… she’d been captured again, only to be released unharmed. Unharmed, but warned: Run, hide. You’ll be hunted soon. If you;re found, you and your family are dead.

So they split up, hoping they would be harder to find that way.

Not just hunted by Aeron who’s gone a little nutty, but by other bad guys, too. It seems everyone once a piece of these women.

Including the “Hunters” (the human society that are determined to kill off the Lords of the Underworld). They catch up with Danika, and proceed to kidnap her (again!). Tied up, drugged and starved, they make a deal with her. They’ll protect her family (who are still on the run) from “Aeron” and the other Lords of the Underworld, if she’ll integrate with the Lords, gain their trust, and reveal their secrets to the Hunters. A spy!

She readily agrees, and the trap is set. The Lords find her in the Hunter’s clutches, battle to free her, and take her back to their castle. Reyes finally has her back, and this time, she’s a little safer, because the Lords have secured Aeron quite nicely (buried him… alive, and then later, in chains) so that he can’t get to Danika (or the other women). But, it’s never that simple, now is it?

She might be temporarily safe from Aeron, but not from Reyes. Reyes, also wants a piece of her. The best piece. Not that sillies! He wants Danika’s heart (as in her love).

“How many times must we establish that I’m already there?” He leaned down a little closer to her.

What’s so special about Danika anyway? While she is very human (or mostly), she has a little gift. She is able to see (in dreams) visions of heaven and hell. And she paints them. Scenes that the Lords soon discover might reveal actual clues as to who the game players are, in their own hellish world, and what the game players area really up to.

All the while, Danika is still struggling with her trust issues when it comes to Reyes and his crew. I mean, who wouldn’t. Because of these guys, she’s been kidnapped, nearly killed a few times, and has had her whole “normal” life destroyed. And yet, her mind battles her heart with that innate sense of trust, and deep attraction to Reyes.

What’s wrong with me? He’d kidnapped her for no reason, held her family hostage. He didn’t deserve her desire! Why did she crave him so desperately? He was handsome, dangerously so, but other men were handsome, too. He was strong, but he would use that strength against her. He was intelligent, but he didn’t exude any sort of humor. He never smiled. Yet she had never wanted a man the way she wanted Reyes.

She slowly bonds with them, despite logically reminding herself of who they are, and what her true purpose is in their midst (to help the Hunters rid the world of them, once and for all).

But, there is just something about Danika and Reyes that fit. Except for a secret that Reyes (who carries the demon “Pain”) is hiding from Danika. Because of his demon, he likes some severe pain when he gets stressed, and ummm… *other* stuff 😳 And he keeps this dangerous side shuttered when around her, considering how leery she already is of him.

Oh my… how will they ever overcome these obstacles? Hehe. That is quite an adventure on it’s own.

His anger seemed to melt from him.

“I’ve battled, angel, and I’m hurting. I need you, and this time, I’m going to let myself have you. Will you let me?”

Steamy stuff for sure, and what I enjoyed is that they both resist at some point. A little hard to get always gets me.

So all of this battling and danger to Danika and company… over paintings? Yes. But there’s more. And why do the gods want her gone? And why are the Hunters, and everyone else out to get these women too? The proof is in the pudding, and I’ll let you uncover all the *light bulb moments*, cause there are a few of them. One where I was all, “ohhhhh yes… now it all makes sense”.

Oh and Paris… his sad story continues in this installment too. He made my heart break twice in this book, and had a choice to make. One so difficult, I dare you not to shed a tear. Or at least get all blurry-eyed. 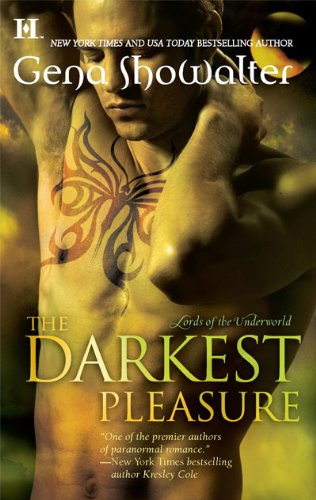 SCREAM!!!!!!!,,,So Im over half way done with The Darkest Kiss,,,I knew I should have skipped over it,,but I probably would miss whats going on with Paris,,,and even though Im likeing Lucien and Anya,,,the whole cat and mouse chase is kind getting boring,,,but Im enjoying the break down slowly but surely,,,Ill be finishing it tonite or in the morning,,,cause Im real real real real ,,,,did I mention how axcious I am in getting started with Reyes Book,,,hehe
great review
Jennifer

Thanks Jenn! Get through #2, cause it’s still a good read. You’ll appreciate the other characters even more by the time you get to Reyes 😉

Reyes is my favorite Lord and this is one of my favorite book. So much happens here for the story arc. I was laughing with your review, my overall favorite character who haunts my soul is Tegan, and who doesn’t love Z and that story, its just epic. You mentioned both in a heartbeat and I really do not associated them together, but Reyes and Z certainly have some commonalities. This series rocks and I love each book, but Reyes still has my heart.

Hey ! Maryse..lol..like you I was RECOMMEND this series the most..BUT just started first book of ” Lords of the Underworld” NOW!
I know, I know..lol…so many books…. But, hey! I’ll get there..
Thanks a Lot for putting your reviews here…it makes it easier to read about books that I WANT to read, but am uncertain…
it seems very BDB-ish for sure..
That’s my next project..:)
*hugs*
Bia

Why does Reyes look different in this story.