X
You are here: Home / Behind The Books / Five Fun Facts about Cora Carmack’s “All Broke Down” and an exclusive excerpt!!

<— Cora Carmack’s next release in her “Rusk University” series is about to be released (THIS Tuesday) and she’s sent over a “5 fun facts” about the book (All Broke Down: A Rusk University Novel) along with an exclusive excerpt. An extra long one!! YAY US!! It’s about 1000 words long, so plenty to get a gooooood tease from it!! 😀

A little hint… She says “…this book has my first real bad boy…” Ohhhh!! Consider me titillated!!!

Five Fun Facts about All Broke Down (by Cora Carmack)

5. When I first thought of writing a book about a student activist I thought it would be something I wrote after I finished the Rusk series, I wrote down a little snippet of dialogue on a sticky note to help me remember the character in my head, and then I filed it away. Then eventually, that character found her way into the Rusk world, and that sticky note was still on my computer a year later when I finally put those words on a page (it’s still on there now too).

4. Typically, I write pretty nice guys, but this book has my first real bad boy. The hero, Silas, was actually one of the antagonists in All Lined Up (Book one). He was kind of a jerkface, to be honest. While it isn’t necessary to read the first book to read ABD, you do get to see the way he changes drastically from the beginning of book one to the end of this one.

3. The heroine, Dylan, is named after a reader I met at BEA 2013. I told her I was going to steal her name. I’m not sure she believed me. It took me a while, but I did it! Who knows, if you come to one of my signings, you could be next. Dylan’s roommate (and the heroine of book three) is named Antonella (nicknamed Nell) after a reader I met at Houston Bookrave 2013! So you can see this is a habit I have.

2. It’s my longest book to date. It beat Faking It (my previously longest book) by about fifteen thousand words. What can I say? I just didn’t want to let Silas go.

1. All Broke Down is without a doubt the sexiest book I’ve written to date. So sexy, in fact, that I was scared to let my mother or sister to read it (and they read all my books). My sister had to threaten to hack into my email (and she totally could because she knows all my passwords) before I gave in. And my mother didn’t even get the book from me. She got a review copy from my publisher.  So yeah. Sexy times, FTW.

All Broke Down Excerpt

His lips return to mine, and all of a sudden, I have one of those weird out-of-body experiences where I’m not sure if this is even real. Being dumped by Henry. Getting arrested. Going to a party with a total stranger. Following my impulses without any concern for the consequences. This is not my life. This is not me.

The way his kiss feels . . . it’s too good. The way kissing feels in a dream, like the complete sum of everything I want and need, and he’s risen from my subconscious to give me the perfect fantasy. His touch is electric in a way that has to be my imagination because skin doesn’t react like that, doesn’t spark and heat and burn that hot. He has to be my subconscious reacting to the mess with Henry because he’s the complete opposite of the guy I’d spent the last four years of my life with.

Henry was a plan, a future, 2.5 kids, and a backyard. Henry is everything I should want.

Silas is this moment only. A quick burst of adrenaline. The physical manifestation of want with no regard to logic or reason.

Oh God. Silas is touching me. Really touching me. My shorts are unzipped, and his hand is inside my panties, and one finger slides against my sensitive flesh.

Sh!t. Not out of my body anymore. I am firmly in my skin, and burning up.

“What happened to my bossy girl?” Silas says, and I don’t think I can even form words to respond.

I just knot my hands behind his neck because I don’t trust myself to hold on to his shoulders anymore for balance.

“No more questions?” he teases. “I thought you never run out of questions.”

“I have a question for you then.”

Just the tip of his finger dips inside me, and the heel of his hand is so close to where I’m dying for his touch.

“Do you want my fingers inside you?”

I swallow, wishing for another one of those out-of-body experiences. Because now I know this is real. It’s too intense to be anything else, and I know he’s going to make me answer. And I’m not sure if I like this kind of thing. It scares me how much I want to answer him anyway, how much I need him to keep going.

The heel of his hand grinds against my center just for a moment, and when he pulls back I cry out at the loss.

“Do you want me inside you?”

I squeeze my eyes shut and whisper, “Y-Yes.”

His cheek slides against mine, and I shiver at the scrape of his stubble. His voice is a rumble in my ear. “One or two?”

He slides one finger in, only to pull it all the way out. His teeth graze my earlobe and he asks again, “One or two?”

Please don’t make me. I can’t—

He pushes two inside, and it’s just enough to ease the ache and simultaneously multiply it. It’s just enough in every way. “Two,” I answer before he can take them away again. “I want two.”

His palm presses up into me as a reward, and I move against it, seeking more friction.

“Take what you want, Dylan. Ride my hand.”

I whimper, and I don’t know if it’s in objection to his words or because they make something tighten in my belly.

I kiss him. Maybe to shut him up. Maybe for courage.

As soon as his tongue slides against mine, I’m reacting on instinct, doing exactly as he asked. His other hand is out of my shirt, and digging into my braid, undoing it until hair starts to fall around my face and swing around me as I rock into his palm.

Every time I tilt my hips, he pushes in sync, curling his fingers and hitting a spot that makes my arms and legs shake in anticipation. He pushes up my oversized shirt and his lips close over the tip of my breast through my camisole. He sucks hard, and my hips jerk, seeking more. I throw my head back because I’m so close.

He lets my shirt drop down and clamps his hand around the back of my neck. His grip is hard enough that it almost hurts. Almost. Instead it just adds to the frenzied pace of my blood rushing beneath my skin. With his hand at my nape, I have no choice but to look at him. His hair is mussed and wild, and I wonder when I ran my hands through it because I don’t remember. I sink my fingers through the strands now, though, because that’s something I want to remember, how it feels to hold on to him like that.

His hazel eyes are so dark and piercing, and that look alone brings me a breath closer to the edge. He pulls me into him, so that his hand is wedged between us with no extra space. I’m still moving against his palm, but when I rock hard enough, I’m pushing against his erection, too. I know when I’ve done that because I can feel his heavy exhale against my lips.

My eyelids start to fall under the pleasure, and he twists his fingers inside me. I pull his hair on accident, and he growls in approval.

“Look at me, Dylan. Don’t close your eyes. I want to see it. I want to watch you come for me. Can you give me that?”

“Feel free to say that while you come, too.”

And that’s it for me. I feel it building the second before it hits, like I can almost see the shadow of a wave cresting just behind me, and then it crashes over my head and I am . . .

Everything is absolutely perfect.

Silas’s lips touch mine, surprisingly soft, and I sink into him, boneless and exhausted and too undone to be embarrassed. My skin is buzzing, and my hearing is off, like I’m underwater. I can feel the delay between my thoughts and my movements, like my body short-circuited and is still trying to reboot.

“I was right,” he breathes against my lips. “Hottest f#*king thing I’ve ever seen.” 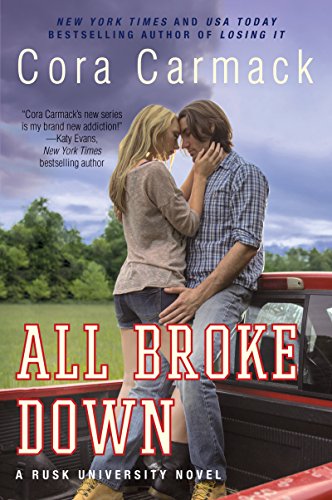 I am looking forward to this one!

I love anything that Cora writes!!!! She is AMAZING!