I was presented with these two options last night, and I just couldn’t resist. I chose both! Yep, I was a bit of a bad-boy glutton and decided that since I could get both of them “in”, in one night, why should I choose? I gave the reading a rest, and sat back and let myself be entertained in two easy, 1.5-hour spurts. And what a fun night it was! They may not have blown my mind, but I don’t think they’re supposed to. 😉 Entertain me they did, though. I know these aren’t books, but I think so many of us can enjoy these anyway (in-between reads). Now it’s back to books for me, and I’ll be reading about race car drivers tonight. YAY me! A different kind of bad boy…

Rock of Ages
Okay, so, you know… it’s a musical. And of course, my mind thought to itself, yah but it’s a “rock star” musical so I mean, how “musical-ish” can it really be? It’ll be like, concerts and stuff, right? A story about playing bars, working your way to bigger and better venues, becoming a rock star? All that. Well, yes, that. But, ummm… hehe. It’s definitely a “musical” in the “Broadway musical” sense, too. There’s no other way around it. Now, it’s not that I don’t like musicals per se, I mean, I do… sort of. It’s just that I always find myself giggling at first, until I finally get involved in the story and forget that the characters just spontaneous break into song and dance, in public like that.

So yes, there was some giggling between my husband and I while we “adjusted” to this genre. And I’ll tell you, by the end, I pretty much loved it. The 80’s songs that they selected were good and fit well (minus one or two that I could have done without) but overall the vibe was right, and I had bursts of exhilaration with a few of the performances.

What’s it about? I thought it was going to be about Tom Cruise’s character, but it’s actually mostly about two up and comers who want to make it big and move to LA, end up working at the Whisky… or is it the Rainbow? A clever twist on the two! They meet some of their rock idols while they work towards their dreams (and of course, fall for each other in the process). But as the rock star world goes, trouble is brewing in the background. Deals with shady characters, the almost parasitical side of the industry, and of course misunderstandings and broken dreams. *break into song time!!*  But it was good. Funny, steamy, and often musically impressive. While watching it, I exclaimed, this would be an AWESOME book.

At another part, I giggled when the young rock star guy (btw I loved his voice!) started to sing a rock song, and the sweet  beautiful girl joined him, and I looked over at my husband and said, “Whoops. She took the “rock” right out of that song.” (I think she’s more of a country singer). Ah well. By the end I was grinning from ear to ear. Overall, a feel good movie, rock-star style.

4 stars for me!! I’d absolutely watch it again. Now of course this is not going to be to everyone’s movie tastes. This one can be silly and *out there* but if you’re open to 80’s music, musicals in general, and an overall just *good feeling* (albeit… cheesy) movie, then I certainly recommend it.

Magic Mike
This is the one I thought I’d like the most, and while I was *ahem* enthralled for sure (tee hee!!), I was surprised at the darker turn it took. I didn’t expect such a focus into the harder lifestyle of a male stripper (namely, drugs, private parties, fights etc…). I was under the impression that this was going to more of a gratuitous male-stripper fest (and it was) with a love story. You know. The whole love struggle that ensues with “dating” a stripper (his job, the women throwing themselves at him, social stereotypes and of course bad-behavior, too!!). And there was that, but I personally didn’t connect to that aspect of the story. It was there, but no intensity. A hinting, but no passion. The story revolved mostly around the seedier aspect of this world.

So it was good, but to me, it could have been more intense in a different way. *sigh* I know… maybe I’m too much of a romance addict. If we’re going to watch “the perfect male stripper” fantasy guy, fall for a normal girl, make it count, ya know? Plenty of angst opportunity there, but this one went in a different angst direction. But it had it’s growth and all that. LOL!! Hey, not that! get your mind out of the gutter! *giggle* I know. That’s hard to do when the guys are doing… what they were doing.

And boy were they doing it. I blushed like mad!

So… 3.5 stars overall (4 stars for obvious reasons 😉 ) and a bit less for the fact that I didn’t “love” it like I thought I would. Would I watch it again? Sure!

‘Cause of the eye popping  cover, I’m making this one the main focus of this post. Just ’cause we (er… I) like it. 😉 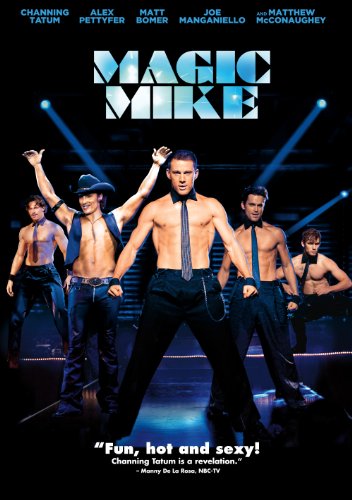 Rock of ages not a good movie

Maryse, I felt exactly the same about Magic Mike! I went in expecting all the eye candy and blush worthy moments….but was a bit disappointed with the dark turn it took. I actually wished there would have been more dancing, cause that boy can move!!
I think Rock of Ages will now be on my “to view” list 😉

So it was movie night? lol i havent seen ROA but Magic Mike….yummy in a sorta empty way. Besides, I really didnt like the girl either she didnt have much range in expressions.

Eeekkk!!!! Did you see the part in magic mike where they take off their cowboy jeans and jiggle their yah know!!!! 🙂

Angie, yes he sure can move… What about that scene with Alcide in the shadow dance thingie where… You know. *giggle*

Thanks for the Movie reviews! I haven’t seen either but a friend of mine loved Rock of Ages and being a teenager in the 80’s she said I would love it too. Now Matthew I will watch ANY movie with him in it so I need to see Magic Mike 🙂

I LOVED rock of ages.. LOVED it.. But Magic MIke= total let down.. Other than the “Pony- Tatum Channing” scene- I thought it was totally stupid. And Matthew is my very fav actor of all times.. And I didn’t even like him in it!

I loved LOOKING at Magic Mike but hating watching it. That love story was unneccesary, and could have been left out completely.