X
You are here: Home / What I am reading today / Currently Reading… Unsticky by Sara Manning

Unsticky
Unsticky?? I know right? I’m still curious as to what this means. Now you all know I’m on a Megan Hart kick, but I’ve been dying to read this book for awhile now (and finally gave in and got the print book – I’ll explain why, later), so I’m going to take a quick break to read it.

And all of you “Christian Grey” lovers will understand why in a second.

as I was saying… what would you say if I told you that in this book, I’ve already encountered:

BUT WAIT!!! It gets better!! Because while nursing her hurt and embarrassment,

Did you just raise a very intrigued eyebrow? Hrmmmmmm?

Now, let me be clear. I cringed at my inclination to “compare”. I don’t want to make an actual comparison. I’m just acknowledging a similarity (and one that I’m delighted about). To me, I can’t imaging anything or anyone equalling “Christian Grey”. He, and his world stand at the top of the hill. But it sure is fun trying to find something like it, isn’t it?

Considering I’ve essentially just started this book, what I am trying to get at, is…

For those of you who LOVED the Grey series (as I did), and want something that gives you “that feeling” again… or that similar tension and excitement (and I know you do, because I keep getting emails and comments such as this one by Brandy):

“Ok so I finally got around to reading the Fifty Shades books and I am on the last one right now and I LOVE them!! AND the music!! 🙂 so what would you recommend as a next read that is similar to that?”

Well. I think I’ve found it!  You know… the high powered unattainable guy with rules. The “arrangement” that has potential to become so much more (or crash in the process). ALL OF THAT.

So far so good! Tons of great reviews on Amazon UK, for it, too. I’ll only give this book one complaint so far. In “new format” it is only available in Europe (I couldn’t even get the e-book on Amazon) BUT, but after getting this very adamant recommendation from Dany…

“Recently I’ve started a book called Unsticky by Sarra Manning, I haven’t quite finished it yet so I cant give a full review but it reminds me very much of Fifty Shades. Its set in London and to me its like Fifty Shades mixed with The Devil Loves Prada. Defo worth a read. Vaughn is a lot like Christian although he doesnt come around as quickly. Anyway just thought i’d share this find with you as i know how much you love Fifty.”

… I knew I HAD to get it no matter what. So I gave in and ordered a used copy on Amazon, and had it within a week. Now I’m fully immersed in it, and thoroughly enjoying the hard-ass snob known simply as “Vaughn”.

Vaughn. Even his name is sexy. 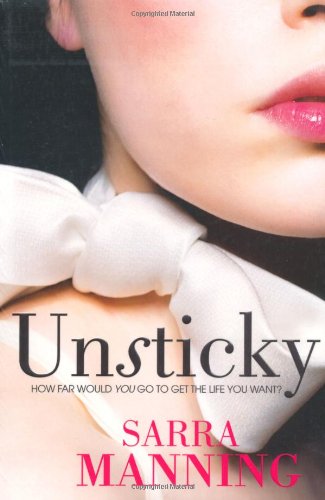 I just ordered a copy thru the link above from the UK as well….it says est delivery March 16….NO! Please be here as fast as yours!! lol

Julie! Mine said March 16th also. Came sooner though, so I was very happy.

Oh, yay! I ordered from 2 places! LOL! They were so cheap tho and now it’s a race to see which one gets here first! I know, I have a serious problem huh?! LOL But if anyone can’t find a copy I”ll be more than happy to send them one! 🙂

I just ordered mine too. Excited to get it. Delivery says Feb. 27-March 13 I hope it sooner rather than later.

Woo hoo! This sounds so good!!! I ordered mine!! I think it’s so funny that the shipping costs more than the book lol!!!

I love, love this book! Vaughn is undeniably sexy! Sarra Manning is one of my favorite writers.You should definitely read You Don’t Have To Say You Love Me. I just wish more of her books were published here in the States.

Just ordered this book. Can’t wait to dig into this book! hehehe ; )

Just ordered mine too! Lucky me, it ships from Fla, my home state so I won’t have to wait for it to cross the ocean, yay!

I love “Unsticky”, it’s one of those books you will never forget after reading it. Vaughn and Grace are such a great pair. I also enjoyed Sarra Manning’s second adult novel “You don’t have to say you love me”, but had some issues with her newest one.

It’s weird that no US publisher has so far published the books by Sarra Manning, thank goodness I’m living in Europe.

Looks awesome. While I am an avid Kindle fan I found it in ePub format. So I downloaded iBooks just to read it

where are you guys getting these cheap prices?? I see $39.20 on amazon and even though I will blindly buy anything Maryse tells me I put my foot down after $20!!! 😉

Well…. looks like we bought them out on Amazon. Only 4 left and the prices are quite high for them.

No worries though. While I enjoyed the book and was happy to read it, I could put it down. Vaughn DID have a “Grey” feel to him, but there was not enough emotional intensity or romance for me to get caught up in it, or feel those butterflies.

But… the last quarter was certainly much more intense. However, considering the huge size of the book, I would have preferred a lot more intensity throughout.

Julie: Hi ! I would love a copy of one of the books you got. They are almost $40.00 now on Amazon ! I would be happy to pay you whatever you paid plus shipping (and shipping to me). You can email me at traciedawn@peoplepc.com and let me know. Thanks.

Maryse: I haven’t been able to get on the computer in a few days (really bad weekend) and I am so behind! But you have really brightened up an otherwise horrible weekend. I always come to your website first, then go to Kristen Ashley’s, then off to Amazon ! Thanks so much for all the great recommendations. (and everyone else’s recommendations, too). I have really enjoyed all these great books.

I will also be giving away my copy with my book review. But the book review will only be up in a day or so.

Tracie, absolutely! You’ve got 1st dibs lol. I haven’t received either of them yet but I would be happy to send you one! It’s only like 4 bucks including shipping! lol I’ll email you now! 🙂 I’d also be happy to pass on the other copy after I read it if anyone needs it!

is there a sequel to unsticky ? i read it and loved it even though it was a good ending i still thought there could be more ?

Is there a sequel to this book because there should be one I mean it was so complicated and hard for Vaughn to *spoiler* . But my point is in the end *spoiler* and we have a sequel please its Grace n Vaughn I don’t get how there is not a sequel