X
You are here: Home / Behind The Books / Cora Carmack’s “Faking It” has just been released today!! PLUS, I have five fun facts about this book, right here.

Faking It <— book #2 in Cora Carmack’s sexy contemporary romance/New Adult series has JUST been released today!!! It’s gonna take us on a “fake boyfriend” journey, to please the parents. Oh I think know where this is going, and I’m already seat-belted in for this bumpy ride!

Also make sure to check out book #1 (Losing It) which had me swooning and on the edge of my seat over the “student/teacher” (in college) romantic tension. It made me crazy and I 5-star loved every moment of that book! Here is my review.

And look what else I have! An exclusive behind the scenes look at Faking It. Cora Carmack herself has released a few fun tidbits for us:

Five fun facts about Faking It!

5. This is the book of name changes. Way back when I wrote LOSING IT, Cade started out as Wade. But then once I accidentally wrote Cade instead, and it stuck. Max (Mackenzie) was originally Joss (Jocelyn), but then she told me I was wrong, and that her name was Max. 🙂 Crazy characters (or is it crazy author? *shrugs*)

4. Music is important in this book. I listened to so much music when I wrote because I needed to experience (and hear) life the way Max heard it– in notes and lyrics. Ironically though, when I originally conceived of the idea of her as a character, I knew she was the “bad girl,” but had absolutely no idea she was a musician. She told me that, too. And it fit so well with a secret that I’d known about Cade from the beginning… he was the one who wrote the coffee shop song “Resist” featured in LOSING IT, and the song makes a reappearance in this book.

3. Every book I write is influenced by what is happening in my life at that moment. Shortly before I started working on this book, I was in Philly and most of the places in this book are based on real places I visited (including the go go bar where Max works part time).

2. While working on this book, I also read Sylvia Plath’s The Bell Jar for the first time (hence the name of Max’s  band, Under the Bell Jar). Put simply, that book terrified me. Because when reading, it was like she tore all the words and thoughts about life and self and longing right out of my head. Like this one:

“I saw my life branching out before me like the green fig tree in the story. From the tip of every branch, like a fat purple fig, a wonderful future beckoned and winked. One fig was a husband and a happy home and children, and another fig was a famous poet and another fig was a brilliant professor, and another fig was Ee Gee, the amazing editor, and another fig was Europe and Africa and South America, and another fig was Constantin and Socrates and Attila and a pack of other lovers with queer names and offbeat professions, and another fig was an Olympic lady crew champion, and beyond and above these figs were many more figs I couldn’t quite make out. I saw myself sitting in the crotch of this fig tree, starving to death, just because I couldn’t make up my mind which of the figs I would choose. I wanted each and every one of them, but choosing one meant losing all the rest, and, as I sat there, unable to decide, the figs began to wrinkle and go black, and, one by one, they plopped to the ground at my feet.”

Then she went a little crazy, started eating raw meat and eggs in a coffee cup and eventually committed suicide via an oven (Well… after she wrote the book anyway). So, you know, if any of you see me with a coffee cup filled with questionable contents, get me some help stat.

And our last fun fact (which was not always fun):

1. To be completely honest, when I finished this book, I really disliked it. It was difficult, and it challenged me, and in places hit too close to home. It was also the first book I’d ever written on deadline, and it happened to be a REALLY fast deadline. I didn’t let friends or family read it. I was straight up PETRIFIED when they started sending out advanced copies to other authors for blurbs. It wasn’t until a few months after I’d written it, once I’d been able to get some distance and perspective that I was able to read it without feeling sick to my stomach. Then a funny thing happened… I liked it. No, scratch that. I loved it (possibly even more than Losing It, but don’t tell Garrick and Bliss). And now, even though it’s been months and I’m working on TWO other books, I’ll occasionally find myself thinking about these characters or jotting down lyrics to a new song for Max. I guess there really is a fine line between hate and love.

Awwww I love this. It’s like a mini interview with Cora Carmack, and she gave me the down-deep details, too. Thanks Cora!!! I can’t wait to read it.

You can find out more about Cora here: 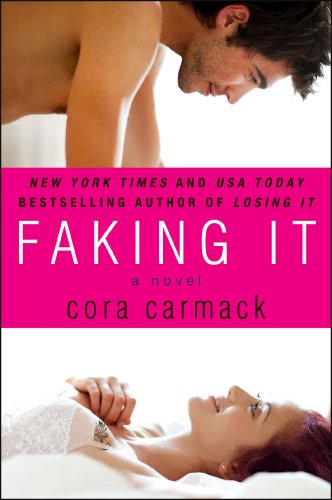 Can’t wait to read this! I loved LOSING IT!!