X
You are here: Home / Behind The Books / Jennifer M. Barry's "Shriek" is live & we have Four Fun Facts + a giveaway!!

Shriek: Legend of the Bean Sídhe IS LIVE, and the author is sponsoring this week’s newsletter, and has sent over a super-fun guest post (and a “five ebooks” giveaway!!)
I must say… OMG the clever blurb had me giggling just a bit ’cause, can you imagine her confusion?? *snort* Plus, I love the tension and angst that the potential romance already hints at.

Sara Donovan is a banshee. Well, that’s what her father says. Her mom just thinks she needs a good psychiatrist. When she wakes the morning after her eighteenth birthday screaming her head off outside some stranger’s house, she’s inclined to believe her dad’s side of the story. She can’t control her shrieks – not when they happen or who dies – but things could always be worse. She could have a crazed madman determined to kill her, thanks to her newfound talents. Or, she could find out her long-time crush is the next to die.
Ridley O’Neill isn’t exactly unaware of Sara. As a long-time patron of her father’s diner, he’s watched her grow up. Now that she’s eighteen, she’s not the gap-toothed kid who used to serve him sweet tea. His current thoughts would send her mother the mayor into an apoplectic rage, since his family might as well have built the wrong side of town. Also, there’s a chance Sara is crazy. She’s convinced she’s a banshee and he’s on her hit list. Still, he can’t stay away from her, protecting her from a dangerous legacy, even knowing that her life saved means his is forfeit…

This one sounds fantastic and fun and intense, and the author lets us into this world, not only via her story… but her research!
Four Bean Sídhe Fun Facts for Shriek Insiders
Paranormal books give readers a chance to escape to a whole new world, to imagine creatures of the night may just be sitting across the high school classroom or on the bus beside you. These creatures are often bound to a specific set of characteristics that make them familiar to us. Vampires: bloodlust, coffins, crucifixes, holy water. Werewolves: full moons, silver bullets, wolfsbane. Demons: holy water, circle of salt, etc.
These characteristics are well known to writers and readers of lore and mythology. Many cultures have their own versions, which can open up more possibilities for characters. Some authors also take liberties with the mythology (Stephenie Meyer and her sparkling vampires, anyone?) to break through limitations placed on characters by traditional narrative.
What sets the banshee apart from most other mythological creatures is twofold: The legend is almost entirely exclusive to Celtic regions—Ireland and some tales from Scotland—and even those who’ve had banshee experiences can’t seem to agree on standard lore. What is known is that she sings for five (or maybe more) specific Irish clans, but even those aren’t in full agreement. The result is a nearly blank canvas upon which to paint new and exciting mythology.
I took full advantage of this with the world created in The Legend of the Bean Sídhe. I held true to the most tenacious of banshee legend, including the five families for which she sings. The rest was open to interpretation. Some say she’s old and haggard; others report that she’s young and beguiling. Some insist she thrives on terror, while others maintain that she shares the sadness of her victims’ families.
Because there is so spongy a foundation for the mythology of the banshee, I thought I’d share some Bean Sídhe insider knowledge—information that may help readers better understand the lore as they read Shriek. Of course, much of this will also be revealed throughout the series, so I don’t plan to give away too much.
This Banshee is Angry
During my research, I stumbled upon one source that suggested the banshee was one pissed off spirit. That makes sense, right? I developed a full back story that includes a witch during the Dark Ages, just before the spread of Catholicism throughout Ireland. Indeed, it is that spread of a new religion that sparks the events that make our Cailleach (Irish for witch) angry enough to kill not just those who wronged her, but also their descendants for thousands of years to come.
The Cailleach Takes Her Family Legacy to Extremes
The first banshee was a human once—sort of—named Cliodhna. As a descendant of one of the trio of war goddesses, she always had the ability to foresee the future. Her forebear—grandmother with many greats attached—was Badb, sister to Macha and the Morrigan, one of the Tuath Dé and a harbinger of doom. After Cliodhna was betrayed, she twisted that ability to foresee tragedy to instead create it.
The Cailleach Targets Only Men
Well, so far. And that’s all I’m going to say about that.
Each Family Has a Designated Banshee
In Shriek, we meet Sara, who shrieks for the O’Neills. Four more banshees will be introduced and have the chance to tell their own stories. The second in the series is Fiona, who receives a small introduction in Shriek, also. She screams for the O’Connors. The third is Stacy, a banshee wreaking confused and terrified havoc on Boston as she wails for the O’Gradys. Caitlin, alone and scared, discovers her powers while living in San Francisco and lamenting the Kavanaghs. Finally, there’s Brenna, the most direct descendant of Cliodhna herself, who sings for the O’Brien clan.
Thank you so much for taking the time to meet with me today. I hope you’ll fall in love with Sara as she races to find answers that might save her long-time crush Ridley from hearing her shriek. And I hope some of this insider information makes your reading experience more enjoyable!
YAY!!! Thank you SO much Jennifer. This was an amazing sneak peek into this world, and I’m thrilled you’re here with us today, too

How to enter for a chance to win a signed set? Just leave a comment below (or better yet, tell us your favorite mythological creature or lore that just fascinates you) and by 10pm EST, Sunday December 23rd 2018, I will randomly select five lucky commenters as the winners.
Also, while not necessary to enter, it would be awesome if you’d share this giveaway on Twitter or Instagram, or Facebook.
The winner will be contacted and will have 48hrs to respond confirming their email address, so if you are picked, do not delay or you will lose your chance. These books will be sent to the winners directly by the author.
Giveaway open to International!!!

Wanna know more about the author? Follow her here: 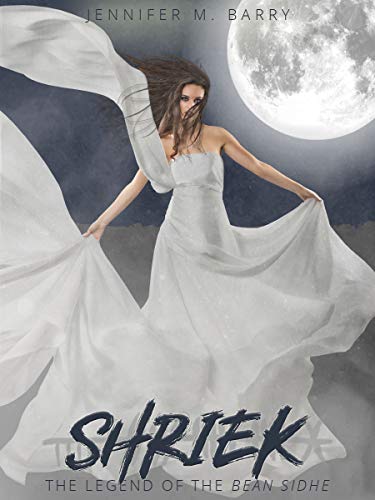 This looks so good!

This book sounds really good! I’ve always been fascinated by werewolves but I’m intrigued by banshees because it’s something different…

I’m truly intrigued! This is different. Has the ‘sound’ to me of the Night Huntress series. I’m 63 and vampire stories have always interested me in the paranormal genre but if the story is good, the subject can always entertain me.