Beneath the Skin: Book Three of The Maker’s Song

I loved this book! It was a perfect addition to the series, and despite the slow, rocky start, the third book in the “The Maker’s Song” series, eventually found it’s rhythm.

I went from putting the book down frequently, using it to help me get cozy and fall asleep (I know, that sounds really bad), to losing all sleep last night as I stayed up reading, and woke up extra early this morning to finish it. The storyline captured me, and Dante takes us on quite a wild ride.

Before I picked up book# 3, I wondered if my love for the first two books in this series, was due to the fact that I was new to the genre. I loved everything back then, while now, I’m a bit more picky. I will admit that as I started book three, I just couldn’t get excited about the characters, the change of pace, the different perspectives, and the frequent story jumps. I figured that perhaps my devotion to Dante and his story, was waning. I mean, he was one of my “firsts”, and I’ve read many a vampire (and then some) since then… 😉

For those who have read the series, and haven’t picked up this one yet, definitely give it a chance. You’ll be forced to get through all the investigative work, the various agencies, departments, and the numerous characters that are working the files. However, as they follow Dante (and Heather), and slowly become aware of the “bigger” picture, things get more interesting. At about half way through the book, it picks up, and doesn’t relent. The group that we’ve become attached to in past books become the focus again, and the story builds, as Dante’s world unravels (or does it actually come together?) – you decide.

“A WISHED-HARD THING TAKES a shape within the heart. Takes shape. Becomes real.”

Okay, so, basically, Dante is a True Blood vampire (born vampire which is extremely rare), and should be worshipped by all the “lesser” vampires (which is pretty much the rest of ’em). He’s also half angel (his father, Lucien is a fallen angel). But here’s the thing. He could actually be something MUCH more important than all of that…but there are many things he needs to get past, to move forward. But who can he trust?

“Like it or not, you’re a creawdwr. There ain’t been one in thousands of years. Everyone’s gonna want a piece of you, from mortals to Nightkind to Fallen. And you ain’t ready to face any of them.”

As his past constantly haunts him, his mind flickers from past to present, creating some pretty incredible and frightful moments in the book. As a child, he should have been nurtured and taught to become a leader, but instead, he suffered and witnessed terrible wrongs. Worst of all, he realizes that he has been part of a horrible government test that has pretty much ruined his mind, leaving many gaps of missing memories, and horrific memories that are too fresh to forget.

Dante is unbelievably powerful, yet untrained, and mentally unstable. Everyone around him, including those he loves are in danger. Trying to keep sane, while constantly on the run, the emotional and physical turmoil becomes almost too much to bear.

“You have power like no one else in this world. And if you don’t learn how to use it, how to control it, you’ll destroy the world and everyone on it…”

Despite his dire situation, he continues searching for the truth, and for the one man, the only man that he truly trusts, but that he may never see again.

And of course, Heather and Dante’s personal situation is still intense.

*Sigh* –> While this is not a romance novel or series, Ms. Phoenix will not leave you hanging in that department.

Some of the additional characters didn’t interest me (specifically those working for the government agencies), but there was one chapter that read almost like a short story that caught me by surprise. While it wasn’t a “Dante” focused one, (it was actually about another vampire named “Guy Mauvais”) it was an interesting chapter that had me utterly charmed, and then it took my breath away. My eyes wide, my jaw dropped, yup…it still haunts me now.

Ya know…as I re-read this, my description doesn’t do the book justice at all. This book is impossible to properly explain. It sounds interesting, but it’s even better, more magical, more disturbing, when narrated by the author. Her depictions are almost poetic, her descriptions vivid. From the smell of a character’s skin to their emotional angst, to the bloody massacres that become a normal part of Dante’s life, your brain will be fooled into thinking you’re one of them, and you will be thinking about them long after the book is done.

Of course it’s safe to say, I can’t wait for book #4 entitled Etched in Bone (scheduled for release February 2011). 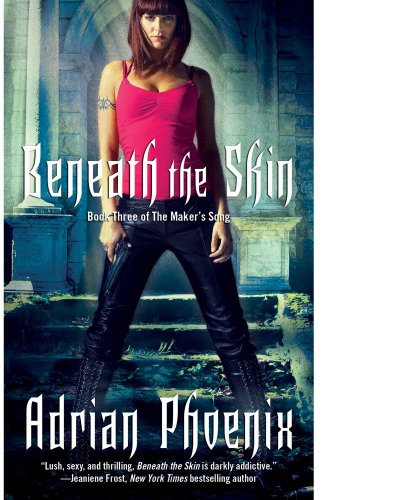 Ok it looks like I will be reading book two and three of this series.