You are here: Home / My Book Reviews / Book Review – Arouse: A Spiral of Bliss by Nina Lane

Arouse: A Spiral of Bliss Novel (Book One)
This was a great suggestion (thanks Paula!!) and I enjoyed it tons! A very down to earth, real (albeit gorgeous ;)) couple in the prime of their beautiful marriage together. Loving, supportive, affectionate and hot for each other, even after a few years of marriage (oh yes… this book is STEAMY!!) But… (yep. There’s always an eventual “but” when it comes to perfect love)…

Beautifully written, introspective, and yet an easy read (even with the eventual angst). Easy because I could relate to to both character’s reactions to certain things that suddenly throw a monkey wrench into their love story. They seemed destined for each other, perfect together. The ideal couple that appeared to complete each other and yet… something so simple, a conversation had by most married couples, plants doubt in this one. Hurt. Confusion.

“Hey.” Dean’s hand settles warm and heavy on the back of my neck. “You okay?”

But I’m not entirely sure that I am, and I don’t understand why.

Their “happily ever after” is threatened and now, what once seemed like a sure thing starts spiraling out of control. Instead of time healing things (you know.. a few days to gain perspective, to calm down or to reflect) things actually get worse, instead of better. Each time they try to repair “it”, to find themselves again, to talk… something else is exposed until all looks lost forever. The conversation that initially started “this” becomes irrelevant to the grand scheme of things… of them.

My disappointment in my husband is so sharp I can taste it, bitter and cold.

Things… happen. Things are said. Suspicions, jealousy, jumping to conclusions and their need to sulk and drown themselves in their own heads, poisons them.

But what I loved? I didn’t feel as if any of it was far-fetched. There was angst, but at a more “normal” level. Dramatic but a real couple’s drama. You’ve known these people. Maybe you’ve been there yourself? Either way, I didn’t roll my eyes once. Of course, I wished that they would not over-react and over think things. The circumstances of their arguments, what was said, what was revealed, fostered these very reactions.

But, it’s as if, even though they were at times being ridiculous with each other (and especially with themselves), I could sympathize with their reality and where each one was coming from. Feel what each one was feeling and I already knew where their minds would naturally take things. Oh I was upset with them and worried at how much worse they could make this for themselves, but I couldn’t “see it” play out any other way but this way.

I’m not saying they did or didn’t do it to themselves, but what I’m saying is that their very human emotional and insecure reactions were coming from somewhere real.

Olivia meets Professor Dean West (hee hee!! Yes it’s sort of a teacher/student love affair) except she was never his student, so it doesn’t focus too much on that. Still though… the professor certainly couldn’t get enough of her and made his intentions clear. Olivia had a turbulent childhood and suffers from panic attacks and other things, but Dean calms her, cares for her, completes her. Loves her.

I gripped his wrists, a knot of fear binding my throat.

Darkness flashed in his expression. “Why?”

My eyes stung. I swallowed hard.

“Here be monsters,” I whispered.

A heartbeat of silence, brewing with danger, filled the space between us. Then Dean tightened his hold on me and, with his thumbs, brushed away the tears that spilled down my cheeks.

“Liv,” he said, his voice rough with tenderness, “you don’t have to be afraid.”

“Because I’ll slay monsters for you”

Sa-woooooooon!!! Oh how he loves her. *LOVE* They are simply AMAZING together.

They are in love head over heels, and there are no instances from what I could see of anything but a pure and beautiful connection.

“Don’t leave, beauty.” His voice is a rough whisper.

No obvious sordid secrets, no dark “reactions”… no bossy-pants man. Well mostly not, but he is an alpha so every once in awhile he tries to take a stand. 😉

But anyway, a thought pops into Olivia’s head (something she had not considered before) and she brings it up one morning to her loving, caring and supportive husband. His reaction is not what she expected.

This is not a phrase Professor Dean West often uses.

For a minute we just look at each other. And then, because it seems like an earthquake is starting to tremble beneath our feet, I lean my forehead against his chest and spread my hand out to feel his heartbeat.

Ugly thoughts pop and blister in the back of my mind. A shudder splits my heart. I try to bear the. Dean tightens his arms hard around me.

The word fine sticks in my throat. This time, I can’t respond.

And there it starts.

Yep! For me, a fantastic read. Perfectly detailed, and a thoughtful progression into their downward spiral. Nothing rushed, nothing over-the-top. It was never too much for me, but at one point I was surprised when I realized just how far down they fell, and I was tense! We do fluctuate between present and past (and different POV’s) but I loved the back and forth in this one (and especially that most of the point of view was from the heroine’s perspective. Made me wonder what he was thinking, too). Sometimes I find it a bit disruptive to leave the present and read about the “past” , but the way it was handled here was perfect. I was able to experience the initial love affair and understand why and who they were “now”, and why this was so unlike them.

An evolving relationship, and we were there to experience it. And guess what? Their story will continue (ALLURE, Book Two), which I am thrilled about! This one doesn’t end on a cliffhanger per se (at least not a crazy one), but… there is MUCH more to get to. They need this. And we do too.

Here’s what other fellow readers have said:

Paula: “I loved every minute of it and can’t wait for book 2 (Allure). Olivia and Dean are happily married, but after one conversation their marriage starts to break down and falls apart, yet they still love each other, there is a lot of love, great sex, frustration, anger and jealousy.”

Jules: Just finished Arouse. Great storyline. I really liked this book. Thanks Claudia for recommending this book! It’s not very often I get to read books about married couples. It’s about what happens to a couple when a big secret is revealed and you start seeing cracks in their relationship. The flashbacks were great to show how they met. The dual POVs also helped me feel their pain. It felt very realistic to me. There’s a cliffhanger but it’s not a bad one. 4 stars for me.

Lynn: Does arouse have a cliff hanger?

Jules: Yes but it’s not a bad one. Maryse thinks this book is really good too.

Maryse: Yes I do!

Day: Just finished reading arouse it was amazing. I love that it wasn’t to angsty & that the cliff hanger wasn’t to strong.

Barbara: I just finished Arouse by Nina Lane last night and I loved it. Great writing, believable storyline and while it is part of a series I was ok with the way book one ended. An added bonus was the steamy romance that was well written into the plot. It’s going on my favorites list. 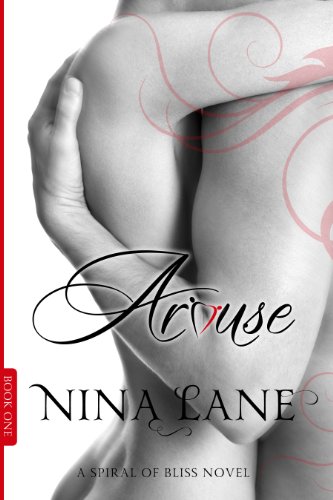 Oh crap, why do you do this to me….I had my TBR list all set and was planning on starting the Coindence of Callie and Kayden today and then I see this….I am never going to get to my list!!!!! Okay really my husband is just going to be mad because I keep buying stuff and never get to it!

This one sounds good – I like that it is about a relationship and that they are married. I haven’t read many books where the couple is already married. Definitely going to read this one after seeing your review!

this book was great. the cliff hanger wasn’t to bad & it comes with a epilogue so you get to see a little more. it was very enjoyable I loved the proffessor. wasn’t to much angst & the just enough steam.

Loved this one! Love their story. Thanks again for another fantastic read!

Yaaaay, so glad you enjoyed it too!!! You know I did lol! 🙂 And didn’t you just love it each time he called her beauty?!?! 🙂

I finished this one this morning and I loved it too! Any idea how long we have to wait for Allure?

The author hasn’t released a date yet but confirms that the book is already “well underway”. YAY!!!

Here’s a quick comment from the author for us, as I was cheering her on ;)!

“Nina Lane: Hooray – thank you, Maryse! Love the cheers as I race toward the finish line. I literally just wrote the line “It’s a measure of how much I love my wife that I just agreed to sit through two hours of dancing, singing pirates.”

And I’m so glad that you recommended it, Paula!!

I just finished Arouse and oh so good I can’t wait for Allure.. 🙂

LIVE!!! PAM GODWIN DARK READ ALERT!!! He's been emailing his dead girlfriend but the emails keep coming to her, instead...

“...The boy’s message is meant for his dead girlfriend, but his anguish speaks to Rylee. It saves her life. Over the next decade, Tomas Dine continues to email his dead girl. As he evolves from a teenager into a hardened, vicious criminal, Rylee is there, reading every intimate word.

He doesn’t know she exists. When she comes forward, he despises her, his cruelty unforgivable. But she doesn’t back down…”

BIKER SERIES ALERT!! THEY WERE RAISED TOGETHER…

“…My Dad adopted Damon when I was only five. We’ve always fought like brother and sister. My family is under attack and the one person I am supposed to be able to count on is Damon, my adopted brother.

We can’t seem to stop fighting either. We used to be close. As a kid, I used to tell him I was going to marry him. I always get what I want...”

Damon: Brethren of the Lost Book 2

“…Winston Constantine is no prince charming… I crave him so badly I think I might be losing my mind. He’s right in front of me, but he’s just as remote as my dreams of getting away from my stepbrothers.

I keep playing his twisted games, and I want to stay just as distant as he is. But I can’t. I never could. I’ve fallen for him. Hopelessly. Irrevocably. But Winston isn’t a lover, he’s a business venture. A way for me to pay for college...”

THEY HATE EACH OTHER & HAVE TO WORK TOGETHER ON A RADIO SHOW (but they're not really "exes" - ruh roh!!!)

“…two exes will deliver relationship advice live, on air. Their boss decides Shay and Dominic are the perfect co-hosts, given how much they already despise each other.

Neither loves the idea of lying to listeners, but it’s this or unemployment. Their audience gets invested fast, and it’s not long before The Ex Talk becomes a must-listen in Seattle and climbs podcast charts. As the show gets bigger, so does their deception…”