CAREFUL!! To properly review this book, I had to divulge some spoilers from book 5 – so if you haven’t reached Book 5 yet, do NOT read this.

Book 6 in the series was crazy fun! We had numerous evil villains, a good-guy with a devastating power, a forbidden love affair, and of course, The Order.

The gorgeous and renowned bad-boy, Andreas Reichen (a Berlin Darkhaven leader) is hell bent on vengeance. Having just lost everyone he loved and protected to an attack on his Darkhaven, he is out to destroy his enemy, Wilhelm Roth (the very same man who blood-bonded to the only woman Reichen ever loved, “Claire”).

Reichen has a pyrokinetic power, passed on to him by his Breedmate mother. He can gather enough energy and power to set fire to anything. Unfortunately, due to a past tragedy, he feared his inability to control his powers, and left his loved ones (including Claire) behind. Successfully able to keep the powers hidden for all these years, once his rage finally gets the best of him, he ends up unleashing his fury in death and destruction .

It had been so long since the heat had risen in him, he’d actually been fool enough to believe that he’d driven the heat back for good. But it was still there, banked but smoldering. Waiting for the slightest chance to ignite while he strove to deny it’s very existence.

He had lived a lie for the past three decades, only to have it erupt in his face.

Now he would never be the same. Now Wilhelm Roth’s treachery had reawakened that monstrous side of him. Now grief and anger had invited the terrible ability back into his life, and the fires were always burning inside him.

They were beginning to rule him.

Having destroyed yet another enemy location, he encounters his ex-lover (Claire, Wilhelm Roth’s mate).

She helps calm him back to his normal state and helps him escape from her husband’s Darkhaven enforcement agents (I’d say she tries to “protect” him from the Darkhaven enforcers, but come on, who are we kidding?). Despite his animosity towards her, he realizes she too, is in potential danger (as gunshots fire around them). In his escape, he takes her with him, all the way back to the U.S, to meet with “The Order” (the sexy vigilantes we’ve been enjoying throughout the series).

There are few sweet moments at the compound, including Lucan’s “awakening” as he looks upon his crew and their Breedmates.

Lucan’s heart went a bit tight as he watched his Breedmate smile and fall into an easy chatter with the child and Savannah, who’d been passing a squeaky rubber ball between them, playing a game of keep-away with an ugly little terrier mutt that belonged to Dante and Tess.

The whole scene was unnerving as hell.

Somehow, in the past year and a half, the compound had begun to feel less like a military stronghold and more like a home.

As they remain in hiding, they re-evaluate what went wrong with their relationship, and how they both managed to end up in their current life.

He thought about the abrupt way he’d left thing with her: unfinished, unexplained. He thought about his reasons, ironically none of which mattered anymore. Certainly not after what had happened last night. “I couldn’t stay.”

“You couldn’t even tell me why? One day we were together and the next you were gone without a word.”

God, he hated that he was still able to feel the punch of revulsion – that had forced him to run away from everything and everyone he knew and loved. After what happened to him the last time he saw Claire, he’d had no choice but to leave her. He hadn’t wanted to harm her, and he couldn’t trust himself to be near her, or near anyone, until he’d managed to control the horrific power that had been awakened in him for the first time all those years ago. By that time, he had already lost her to Roth.

He gave her a negligent shrug. “I did come back Claire.”

“More that a year later,” she replied curtly “Or so I heard, after friends in the Darkhavens told me you had finally turned up, back in Berlin again.” She shook her head, regret shining in her gaze. “I didn’t think you would ever come back.”

“Did you give me any reason to?”

True love never dies, and while Claire is blood-bonded to another, in their passion, she allows Reichen to bloodbond with her. Unfortunately, her original bloodbond leads her husband to their vicinity (and because he can feel what she feels, he knows she is with Reichen).

Oh, God. She couldn’t let Andreas know that Wilhelm was in the area.

As much as she wanted his revenge, Claire wanted him alive even more. She could not be a party to his destruction, which was exactly what she was right now, so long as she remained in his company.

She had to get out of Boston.

She had to get far away from Andreas…before the bond she shared directly with Wilhelm Roth betrayed her and led him directly to his death.

While Claire despairs over Wilhelm Roth and makes a few bad decisions, (and really ticks of Andreas – LOVED that scene), we realize that Wilhelm is also involved in Drago’s plot to create and unleash his GenOne’s into society (forever changing the race).

And there is a third battle that rages, the one within Reichen himself. Will he trust himself to live and love again, or will he relinquish himself to his all-consuming power?

While the passion in the story was burning,

“God Claire,” he rasped, the tips of his fangs abrading the tender skin of her collarbone. “Why couldn’t you have just let me go?”

She shook her head, too lost for words or reason. All she knew was the desire she had for this man, this incredible, honorable Breed male who should have been hers. Who might never be hers again, once his search for justice that consumed him finally did take him away from her.

it was the “normal” moments as Claire revisited her hometown that made this couple believable.

Claire said a polite good-bye to her former classmate, and Andreas ushered her outside in an oddly brooding silence. More than that, he seemed downright irritated about something.

“You are!” Claire threw her head back and laughed. “Oh, I don’t believe this. You walk through a crowd and every head turns, female and male alike. I happened to catch the eye of a harmless old man – ”

“No man is harmless, Claire.”

However, the reasoning for the hatred between Roth and Reichen left something to be desired. Really? All of that death and destruction for something so trivial? The build-up to Roth’s rationale of why he hated Reichen so deeply, had amazing potential (Oh, I dunno, maybe something like…Reichen’s power once devastated someone that Roth loved, or even an “evil-twin” mighta worked), but, no, in reality, the truth was so basic, that, that part of it sort of flopped.

Luckily, the ending does redeem itself, and we are even granted a little twist of doom…Can’t wait to see where the next one leads us (Shades of Midnight: A Midnight Breed Novel – release date: December 29, 2009) 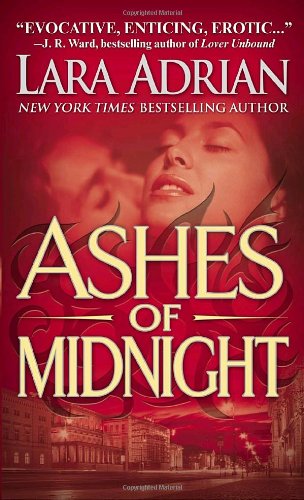