Back to You
*grins* You guys went all out recommending this one didn’t you? It was already pretty high on my TBR list (the author sent the book to me a few weeks ago) and after reading the synopsis, I knew it was definitely going to be my/our thing. After a couple of recommendations, I made sure to keep it in the top half of my Kindle app.

And then over the Thanksgiving holiday… the recommendations from our fellow readers just started pouring in. I knew it was time. If it was affecting you guys this way, I absolutely had to feel that too.

Danielle: I just finished Back to You by Priscilla Glenn and looooooovvveed it! Love, heartbreak, redemption, and total angst. Worth every penny I spent. 🙂

Twin: Finally!! I have found an unbelievable book that has all of the things we look for, great story, wonderful writing, and of course an irresistible bad boy. I read all of the same books you all do and a lot of them have just been 3-4 star books for me lately. I just couldn’t put down Back to You by Priscilla Glenn and it was one of those great surprise books that you read and are reminded why we love our indie writers. I haven’t really seen people talking about this so I thought I would pass it on, you won’t be disappointed!

Natasha: …The writing is flawless, the storyline well developed and the characters just get under your skin from page one.

Lyndsay: If you are looking for a really good “can’t put it down” read I would highly recommend looking at “Back To You” by Priscilla Glenn. It is a really sweet love story, with a lot of sexual tension, and it’s neat because it goes back and forth from past to present.

Mollie: I just wanted to shoot you this link for Back to You by Priscilla Glenn. I really, really think you need to read this…I truly believe this is worth a bump to the top of your TBR.

Madison: Reading *Back to You* by Priscilla Glen and LOVING it. Figured I’d share the love and let ya know in case you were wanting to read it soon!

Aestas: I literally would just read scene after scene with my hand over my heart either smiling or near tears.

Virginia: back to you is a great book… just wanted to tell you you would love it.

Liz Marie: I had to bring your attention to this FANTASTIC story! This one is special.

We are really lucking out with these poignant, beautifully written, heartfelt reads these days, aren’t we?

I devoured it in one sitting, and yes, I too found myself with a silly grin for many parts of it. I was… pleased. Delighted. And crushing HARD on Adam. My heart skipped beats and I had butterflies in my stomach with everything that involved him. I was looking forward to the chiropractic treatments as much as she was. That new crush. The innocent flirting… the hoping. The chemistry!! Oh yes. The chemistry.

In fact, I was wishing we could have a whole lot more more of that sweetness. Mostly that. Only that.

Lauren pushed off the table slightly so that she could turn to look at him, fighting her smile when the hope she heard in his voice was written all over his face.

But then I realized why we couldn’t only have Adam. Because there was a deeper story there. A painful past for two very beautiful souls that suddenly took much of the spotlight in Lauren’s story. Something that she did her best to bury, to move beyond. And she was “mostly” doing okay. Until her past became her present again.

She was too stunned to even breathe.

And so she stood there, completely frozen and numb with shock, unable to feel what she expected herself to feel if she ever saw him again: confusion, disbelief, longing.

But most of all, anger.

He was the broken heart of the story. In so many ways. And he was the ’cause of it, too. Tormented. Anguished with guilt over traumatic events from his most formative years.

Lauren had no idea what was fact or fiction, what was true and what was exaggerated or embellished, but by the end of the day, she was pretty sure she had come to two accurate conclusions:

Michael Delaney had a very troubled life, and the general population was smart enough to stay away from him.

Growing up without love, becoming a troubled teen, Michael doubted himself and stifled his potential for meaningful connections. Except for one. The one person who saw through his bad-boy, angry persona, and connected with him on a soul deep level. Lauren and Michael became inseparable best friends through high school, and she secretly pined for him. And I felt every moment of that.

But his need to punish himself… ended up punishing her, too. And I felt every moment of that.

Where Adam was the relief in Lauren’s adult world, Michael was her constant pain. Where I sighed and swooned over Adam’s knowing grin, and flirtatious banter, I simultaneously ached for everything… “Michael”. His initial doubts, his current awareness and his attempt at regaining her trust. And I sympathized with them, as they struggled to become friends again.

It was harmless to catch up with an old friend.

No. She had to remember who she was talking about. Nothing about Michael Delaney was harmless. She had learned that the hard way.

This story is Lauren’s journey into her own personal healing, and possibly loving, once again.

… she couldn’t help wondering if there would ever be a guy she wouldn’t run from.

And Michael’s possible chance, as an adult, to set things right. For her, and for himself.

She had been civil today, but not amiable.

That openness, that innocence, the unfailing and unconditional acceptance she had always shown him, despite what he was, was gone.

She was the only one who had ever given him that, and he’d destroyed it. Consciously.

Michael closed his eyes as he dragged his hands down his face, because as much as he longed to have that back, even for a minute, he hoped she hadn’t forgiven him.

He didn’t deserve it.

I personally experienced every bit of it. And while my emotions remained mostly… even-keeled, I still “lived” the character’s hesitations, delights and distresses. The events (past and present), and their reactions… genuine. I believed them. In real life, even though the mind knows what it “should do” the heart overrules with what it wants to do. Making wrong decisions, or right ones. I guess it depends on who you ask. And when you ask them. And such is their development. My world may not have been flipped upside-down while reading this one, but that very quality made for a quieter, more introspective reading experience.

Angsty, yes… but on a gentler level (although… there were some moments…) 😉 “Back to You” wasn’t so much about shock-value and emotional devastation, as much as it was an emotional progression between surviving the past and truly living in the present. A raw, yet merciful journey encouraging the characters to re-evaluate, heal and grow.

A solid 4 stars and maybe even 4.5 stars for me. The writing was excellent, the story, mostly gratifying and I am so happy that you all insisted I read this. I didn’t put it down once. I just had to know…

But… ummm. If we could have a book #2? There are a certain few things that I still… need. I won’t say what, but I’m sure the author has a pretty good idea. *hint hint* 😉 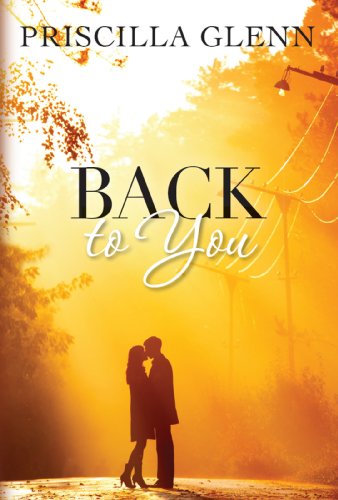 What’s the “steam factor” on this one? I’ve been reading too many PG13 books and am looking for a little heat! 😉

You made me live it all again!! BEAUTIFUL review, Maryse, I bow to thee.

Loved this book & Love your review!!! I am a new fan of your blog and now I see why you have so many followers. Thank you for hinting for a book 2! 😉

Nikitab… It’s got steam, but not explicit. More romantic…

*hug* to every one of you that sent me recommendations for this one.I read each one of your comments and definitely enjoyed staying up late to finish this book.

Oh, I am so, so happy you enjoyed this!! It is quiet, compared to others, but, for me, that made it even more real and special:)

I read this tonight and couldn’t put it down. Of course I was a big blubbering mess at a couple parts. Great read! Thanks for the recommendation.

great review. I was left feeling whether Michael had matured or not. I guess the fact that he has a daughter is the clue for that. As for Lauren, I love her, but she really put herself through a lot of heartache for this guy. I wish she didn’t have to go through it, but we wouldn’t have a book to read would we if she didn’t? My favorite scene is when she was sick and they were watching the movie together, that’s how I knew he loved her…

I couldn’t put this book down. Pure perfection!!!