X
You are here: Home / My Book Reviews / Book Review – Before We Were Strangers: A Love Story by Renée Carlino

Before We Were Strangers: A Love Story
If you are looking for sweet relief from the dark, the gritty and the more “hardcore” love stories that we love to indulge in, then this one is for you! It will heal your book-broken heart (but first, it will break it!!! Tee hee!! 😛 ), coddle your traumatized book-soul and cleanse your eyes from all that delightful defilement, by easing your into this pure, peaceful, traditional broken-hearted, second chance contemporary romance read.

Anne: You guys!!! I am in book heaven! I started Before We Were Strangers last night as soon as it arrived on my Kindle and finished it this morning and wow! WOW!! What a book! Its the best book I’ve read this year. I cried, laughed, swooned and fell in love. Matt is perfect! I am so in love with him! This is Renee’s best book to date. You all need to read it ASAP! I wish I could start it all over again. More than 5 stars for me. PERFECTION!!

Amy: *sigh* That was fun! Sweet and emotional with just enough drama during some parts to give me the nice little fix I needed. … It was about a 4 star for me…maybe a 4.5 at some points but overall a 4 star. How fun and carefree though were they in college?? Those parts were adorable.

Lisa: Oh Just finished Renee Carlino’s BWWS and it was beautiful. Just beautiful. How does she do that!!!! Evoke such heartache and longing. I’m a blubbering mess of huge sentimental romantic tears. Sigh. 5 sparkling stars for this one. Perfection. …BWWS was classic Renee Carlino

Cheryl: Just finished BWWS. I love how the author writes- it just flows beautifully. It was such a bittersweet second chance story full of regrets and what ifs.

Anne: I laughed when Grace and Matt played that game cause you guys were playing it at the same time! It was so weird lol

Jen: Before We Were Strangers is absolute perfection. I can’t stop crying. Lol. Poor Grace and Matt. One of the saddest stories I ever read. It just broke my heart. I don’t really like 2nd chance romances. Call me crazy but I find them too sad. All that wasted time! But this story sucked me right in from the beginning. The writing was beautiful. I love Renee Carlino. Huge fan!

Anne: I like second chance romances because they give me hope. True love never dies and that’s just beautiful. BWWS is powerful because of that and yes they lost a lot of years but they found each other again and that just makes me happy. Not many people get a second chance or find true love which to me is much much sadder. Jen I am so glad you loved BWWS as much as I did!

Pure in its entire course (pure, yes… but the characters are not perfect). Mistake are made, in fact, at times I wondered how forgivable some of these mistakes were. Expectations that were not lived up to, and secrets that were life-changing. But throughout the initial first meeting, the fun first “friends-only” dates,

Once we were inside the blood bank, everyone behind the counter recognized Grace and smiled or waved at us as we stood in line.

“That’s such an old pickup line, Matt. I think you need new material.”

“Much better. Now you have my attention.”

…the amazing slow-burn friendship that you could tell was SO much more, and the eventual BIG LOVE, the angst (oh the heartache!!) we know… we KNOW this is going to come full circle and in the best way.

Because despite the heart-breaking circumstances, and the OH SO VERY BAD decisions, there is a second chance that is presented to them. And boy do they try to take it.

Try being the operative word, because even though they’ve found each other, when certain things are revealed mixed with past resentments, and current confessions, it becomes SO hard for the main characters to properly “find” each other again. In fact, in a way, they’re still trying to find themselves. From “new adult” to full-on adulthood, life has thrown them some curveballs, and that pure soul-mate true love that they thought they had has been tested, over and over again.

It starts off when Matt (dealing with normal but painful adult struggles) is waiting for a subway, and sees his “new-adulthood” sweetheart that he hasn’t seen in YEARS (but has NEVER forgotten), in a train that… is just leaving. One glance, and both realize who each other is, but it’s too late. She’s off.

Just as the train doors closed, she turned around. Our eyes locked.

She pressed her hand to the glass and mouthed, “Matt?” but the train was pulling away.

Without thinking about it, I ran. I ran like a crazy person to the end of the platform, my hand outstretched, willing the train to stop, my eyes never leaving hers. And when I ran out of platform, I watched the train fly into the darkness until she was gone.

But he’s DYING to see her again, so he posts a “looking for you” type of ad on Craigslist. And she sees it…

‘Cause you see, Matt and Grace both met in college (as dorm-room neighbors). Matt, coming from a well-to-do family (but having his own struggles as a budding professional photographer, that his dad does NOT approve of), and Grace, an incredibly talented cellist but from a very poor family, struggling just to make ends meet. And I MEAN STRUGGLING.

In the short time I’d known her, I could tell that as savvy as she seemed about the world around her, there was a poignant fragility about her, a childlike innocence I had detected immediately. It came through her eyes and shy gestures.

She is forced to “make due” and make money however she can (not anything nefarious – this isn’t that kind of read 😉 ), but her one solace is her new best friend and confident, Matt. He is her peace, her happiness, and her big-time crush. Knowing that both might be going their separate ways soon enough (internship for him, and potential orchestra tour for her), they insist on keeping their friendship “light”. Until they can do so, no longer.

…all I could think about was how hard Grace worked, all the sacrifices she made just to play her music. She believed in it, she had faith that it would all be worth it, and what is faith if it doesn’t endure? That’s what I was learning from her: how to have faith in myself and my art.

I felt it for Grace before I even had a name for it. I might have said the word a million times, but it sounded different now that I meant it. When I thought about what we had, it didn’t matter that it was just friendship. I loved her.

And that’s when things get rough for both of them. That inevitable count down, and yet the need to never let each other go. What happens when they could potentially be ripped apart by opportunity?

This is THAT journey. And I will let you live it with them.

And what a fantastic journey it is. Exquisitely written, the reader is allowed that amazing “slow burn” as the main characters grow closer and closer while trying to keep it platonic. But better yet? The angst that they both suffer from the inevitable heartache that changes the course of both of their lives. Nothing TOO crazy, but certainly plenty to make the reader feel it.

I’m struggling with my rating. The writing has that 5-star quality, yet as much as I enjoyed this sweet and angsty romance as a whole, there was just a little too much “arms-length” for me… that kept me from melting down, over it. Or maybe it was just… “a little too little” of something? I had BOTH POV’s for awhile and I always prefer just HER POV, because in real life, that’s how I’d “live” it. Just my POV, you know? Already knowing what he’s thinking, feeling and intending takes away some of that insecurity and angst, for me. That said… where it really counted, I had only her POV, so that helped make me FEEL this one… enough to love it.

*sigh* I’m still mulling it over. No matter what, though, I highly recommend this if you’re in the mood for a really great, heartfelt journey, loaded in angst and healing, all in the name of true love.

P.S. Thank you to the publisher for sending me a review copy! 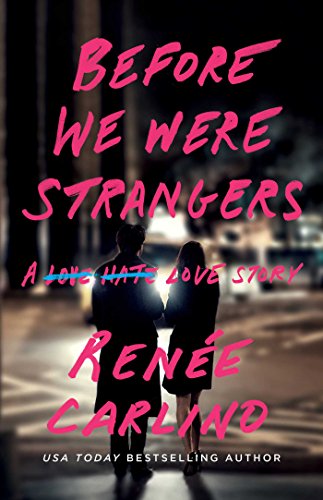 I read this in one sitting today and loved it!! It’s one of the few books I gave 5 stars to this year. The current, the past, the heartache and what ifs. So good!!

This was an easy 5+ star read for me… one of the best, or maybe even the best, this year! I can’t wait to read more of Renee Carlino’s books!

This book was so painful to read in some places! The regret over missing out, and lost time… ugh. It just hurt! I’m so glad I read it though – I love the overall tone; it’s hopeful. Definitely not a ‘throw away’ read. I’ll remember this for a long time.

Your review is exactly what I was feeling, but I wasn’t really sure what it was, just that something was missing from the story for me. And the LONG time apart really messed with me. I do love her writing though!