Bonded by Blood (A Sweetblood Novel)
This one came to me by way of a friend who purchased the book for it’s very steamy vampire-y cover. She thought it would look nice displayed in my upcoming “vampire/reading” room, and I have to agree. It’s gorgeous! But the best thing about the book is actually the story told inside. I just read this on a recent business trip, and it wholeheartedly captured my attention and kept me entertained throughout.

It’s about Dominic, the PERFECT vampire (well, in my opinion anyway). He heads a vampire law enforcement team, where they protect humans and other vampires from a group of “bad” vampires called the Darkbloods. The Darkbloods run a black-market operation, draining humans with rarer blood types for sales to other vamps. Civilized vampires feed from humans in small amounts (so as not to hurt them), and do that whole “vampire-mind-trick” thing to keep them from being scared, and from remembering the encounter (cause you know… vampires don’t really exist). Darkbloods however, have no respect for humans, see them as cattle to feed from, purposely frighten them (adrenaline sweetens the blood), and most often, drain them dry.

Especially when it comes to the rarest and most addictive blood type of all. It seems NO vampire (civilized or rogue) can resist a “Sweetblood”. Just the scent of a sweetblooded human can cause the most moral vampire to go feral. One taste of the highly addictive blood, and it might be impossible to stop the feeding until there is nothing left.

Poor Dominic. In bad shape as he suffers from a silver bullet wound (he was battling the Darkbloods again), his vampire healing powers are trying to regenerate him as he lays in a forest to heal. But he needs blood to speed up the process, and oh NO! What is that coming his way but a beautiful human female (Mackenzie) taking photographs of the scenery. And what is that intoxicating scent? That’s right. She’s a Sweetblood. Run Mackenzie run! To him! I mean… AWAY from him 😉

But of course, he is Dominic, an honorable vampire and a protector, and he resists her, right? Nope! She gets too close as she notices the wounded male who might need help, and he pounces.

A small voice at the back of his head told him to stop, but he shoved it aside.

He’d fed directly from humans before, probably more than he cared to admit, and he’d absorbed the energies of thousands, but never were any of them like this. He heard about the taste of sweetblood, all of them had, but no verbal description ever came close to this delicious reality. And her energies? He’d never experienced anything like them before. There was nothing he couldn’t do with her in his body, he realized. Impossible no longer existed.

Drains her almost to death, but because of his training, is able to stop before it’s too late. Unfortunately (or should I say fortunately 😉 ), to help her recover from the extreme blood loss, he gives her some of his own blood (which is highly illegal in the vampire world, unless you are changing the human, which of course, has it’s own set of rules). But he does it anyway, just enough to save her human life.

However, there was an unexpected consequence. They are now bonded by blood. They can feel each other, and talk to each other even at a distance (although he tries to block this ability, from her, to keep what he is a secret). Somehow, they keep managing to run into each other, and their attraction grows.  With this blood bond comes a romance that will take your breath away, because it is one that is essentially impossible to control. But how can a vampire resist the biting temptation during intimacy, especially with a Sweetblood, and not potentially kill her? He might have succeeded once, but he doesn’t think he can control himself the next time.

So the only way to avoid a “next time” is to make sure the romantic attraction never escalates. HA! That was the fun part, and it played out perfectly throughout the entire book.

“Oh,” she scowled. “Well I’ve got news for you. What happened at the auction was an anomaly. An accident. A horrible mistake.”

He closed the distance between them and her eyes flashed. Toe to heel, she backed away from his advance but he continued until she could go no further. With both hands on the wall, he caged her between his arms and leaned in, stopping just before their bodies met. His eyes were drawn to the pulse fluttering below her ear and licked his lips.

“An anomaly, yes. A horrible mistake, no.”

All that angst (both have troubled pasts, of course, that solidifies their “must resist love” arguments), and I’ll admit, Dominic got scary a few times… And for a human who didn’t even know vampires existed, you can imagine her surprise when some of those pointy secrets start “showing”. Yay! You know I’m a sucker for that “human realizes he’s a vampire” moment!!!

Which leads me into the other “good” part. The danger. With their connection, he makes it his personal responsibility to protect his rare Sweetblood from the Darkbloods who are hunting her and her kind. And what he realizes in the process of protecting her, is that there is more to the Darkblood’s seedy operation than they ever realized.

So there you have it. Another entertaining read for you! I hope you’ll let me know what you think of it. I’m currently reading book#2 (coming out in June), so there will be an update to follow. 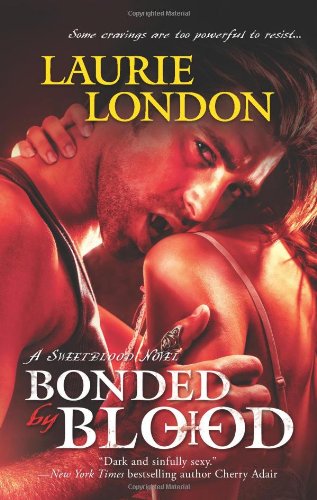 You know I loved it!! When she becomes accepting of him being a Vampire so soon and just goes with it, was awesome!! They had such awesome chemistry from the beginning of their *chance* encounter 😉
This writer had me at the graveyard scene….
Loved Dominic

I loved this book!!!!
I had a hard time with his name though. I’m Afrikaans and in Afrikaans “Dom” means someone who is extremely stupid, so it was difficult at fisrt to visualise him because I kept laughing. After a while I just read Dominque everytime the author referred to him as Dom and it was smooth sailing from then on.

You are killing me. *as I go to barnes and noble to buy* I already like him.

Yup you guys, he rocks!! And as I was telling you earlier (Lily), my favorite part was when he was being tempted by Mackenzie’s blood yet again and he said (and I’m paraphrasing here since i don’t have the book in front of me right now):

“RUN Mackenzie!! RUN far away from me NOW – LOCK the doors and you better pray I don’t vapor in underneath the door.”

Lezanda!! I’m so glad you were able to overcome his name. That is so funny!!

Sherry!! What about that beach scene when he was running trying to get to her as fast as he could….

When she was walking by herself collecting Clams, and she jumps in his arms when she sees him, and he thought she was going to hate him for leaving!!?? I loved that part 😀
Every part of this book had an awesome *romantic* vamp/human feel to it!! He was just so sweet and she never made him feel horrible. That was my favorite part of the whole book, YES, even better than all the great sex scenes, was how she was so accepting of him so soon, and totally wanted to be with a Vampire!!!! I hate whiney humans and all their, “no, I can’t be with you, BECAUSE you’re a Vamp” WHAT???? Please!! That would BE the reason I’m with him 😉

So I read this review last month and read the book this past weekend. Thank you for recommending it. Now I have to buy the next one. It upsets me though that I’m at the beginning of a series instead of finding one that has numerous books in it already. 🙂