Born to Bite: An Argeneau Novel (Argeneau Vampires)
Well….*hrmph*. This’ll be a simple book review to write, because it was a simple story. It makes me sad cause I really love these guys. I think they were just tired and not up to entertaining… 🙁 I hung out all weekend with them anyway, hoping that the party would pick up. But it didn’t. And…I think I overstayed my welcome at Armand’s house. The Argeneau’s accommodated my needs for their company, but you could tell, they just wanted me to go home, while I sat there with my eyebrows raised, saying…”Come on!! Make me laugh!! Make me sigh…” Hehe 😉

So yeah…It didn’t thrill me. I sorta *liked* it, cause I missed the Argeneau’s (and the Rogue Hunters for that matter), and was happy to back with the old gang, but… no. It was nowhere near as funny, exciting or romantic as any of the previous installments. In fact, the writing was really simplistic. The conversations were long and drawn out, and…weird. The explanations of every little thing became tedious. Now, I’m not talking about re-explaining the whole “what a vampire is” situation (for the newcomers). I’m referring to simple and silly comments made (oh let’s say for example…a sarcastic remark that was obvious in it’s meaning), but then ended up being explained, anyway, in the character’s thought process.

The book did however, solve a mystery, which was nice. A murder mystery that at one time I was very curious about. Unfortunately, while it was actually being investigated in this installment, I was bored.

Eshe d’Aureus (one of Lucian’s enforcers) is sent to investigate Armand’s “three wives & one daughter-in-law died gruesomely” situation. Were the deaths accidents as everyone was led to believe, or is something more sinister at large? Could Armand have killed his wives? And did his son Nicholas kill that poor mortal that he was found cradling in his arms?

Lucian sends Eshe to live with Armand for a few weeks, under the pretense that she’s in hiding, and needs Armand’s remote location for protection. In essence, however, she will be questioning Armand, and snooping into his past to uncover the truth.

…he’d assigned Eshe the task of sorting out the mess and finding out what really happened to Armand’s wives and hopefully, Annie and Nicholas. It was a pretty demanding task, almost impossible to do, really, since Armand’s first wife had died in 1449, she thought.

Problem. Armand and Eshe can’t read each other (meaning they are life mates).

Any other time, finding a possible life mate would have been a cause for joy. This time, however, with this man – a suspect in several possible murders – it was not a joyful event and she was almost in a panic at the realization.

It’s hard to investigate, when you’re…*ahem* physically attached to the new love of your life. And it’s hard to have perspective when you’re in love with the very man you suspect, and believe every word he tells you. Ok side note – that initial “food” scene was quite good, which led up to:

…and then stood abruptly, almost toppling his his chair in his haste. “Eshe and I are going to have a word in my office, Mrs. Ramsey.”

It was all he said, and all he needed to. Eshe was on her feet at once and leading the way, moving as quickly as she could without running. She entered the office, heard the door close behind them, and turned at once.

Armand was there to meet her so thats he almost bumped into his chest before stopping her turn. In the next moment she did bump his chest as he tugged her into his arms and claimed her mouth.

So, due to the “he’s my life mate – now I’m biased” fiasco, Bricker is sent by Lucian to help her investigate (and “guard” her).

“A little rest and you’ll be right as rain.”

“Rest isn’t going to help,” she admitted unhappily, her shoulders sagging in defeat. “He’s my life mate, Bricker. The only thing I’m thinking when I’m near him is how to get his pants off.”

But really, let’s be honest here. Bricker was sent to help this whole book situation. He pretty much steals the show with his sarcastic wit and his absolute adorable-ness (is that even a word?). Oh! And he cooks. *heart*

Here’s a funny Bricker moment. Since neither Eshe or Armand have eaten in hundreds of years, neither are familiar with today’s foods, and Bricker gets a kick out of it. Now that they are actually “hungry” hungry, they make some odd food choices:

“Eshe was going to eat Metamucil,” Bricker announced, grinning with an amusement that only deepened when he saw Armand’s blank expression. Shaking his head, he pulled down the canister of Metamucil and held it out. “Did you know what this was when you bought it?”

Armand eyed the container and shrugged. “No, but it looked good.”

So while Armand and Eshe did get pretty steamy at times (oh ha! Funny! I didn’t even do that on purpose. If you read this book, you’ll see why I giggled) Bricker was my favorite.

Oh and there was a nice overall “message” to the story, which, actually – now that I think about it, makes me like the book a whole lot more.

Eshe shrugged. “Different times, different places, different people. It’s useless to regret things you didn’t think of at the time. Everyone has a path and that wasn’t theirs.

But overall, I felt many situations in this book were rushed (things that seemed important would quickly be swept under the rug) and overall, it felt overstuffed with unnecessary detail that simply didn’t contribute to the mood of the book. I dunno…maybe the author just wasn’t feeling “it”. Or, perhaps I’ve just changed over time, and like something darker and grittier? No. That’s not it. I still love funny, and lighthearted paranormal romance. The premise of the series is still awesome, and past humorous moments and clever dialogue still have me chuckling (ex: many Lucern moments, and Thomas moments. Oh and Bastien too!).

Unfortunately this one fell flat for me. But that won’t keep me from reading future installments. I adore this family (and the enforcers) as a whole, and anxiously await the next one!

So tell me guys…what did you think of this one? Was it on par with the rest of this awesome series, and maybe I was the one just being a bummed-out house guest? Or did you feel that “meh” too? 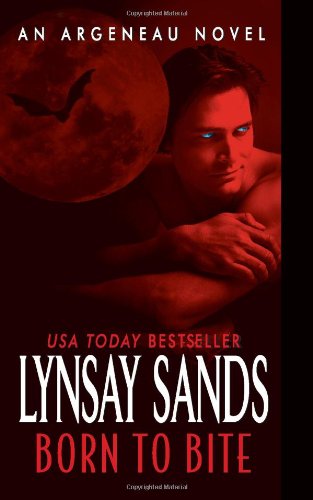 I was waiting for your review because when I read the book I thought maybe I missed something. It didn’t even feel like it was part of the same series that I love. I had no feel for any of the charactors and figured I was just being moody. I see I’m not alone.

I liked it but there are definitely others in the series that were wayyyy hotter and more entertaining. I love the characters in the series as a whole though and will continue to read as long as she continues to write 🙂

I totally felt what you felt. The Argeneau series was my first PNR. I have enjoyed every book. This book did nothing for me. I started skipping pages to get to the end so I could find out who the killer was. I will continue to read her series but I did not like this book.

This book draaaaaaags! “Steamy” scenes that feel like they are written by a 12-year-old, pages on animal poop and sex, that’s like, all of it. I can’t finish the book and I just want to know who the murderer is and I can’t find any spoilers.