Covet (Fallen Angels, Book 1)
I was thrilled to find out from another blogger that this series occurs in the same area and timeline as the “Black Dagger Brotherhood”series. In fact, one of the characters that we glimpsed in the BDB series (Marie-Terese) is one of the main characters in this book, and we are even granted a quick appearance by Phury (don’t blink or you’ll miss it! – here’s a hint…page 86 ;))

The story begins like this: Jim Heron, working as a construction worker (on repose from a destructive past employment) is working with a crew building a mansion for a wealthy billionaire. One evening, he, and a few members of the crew, gather at a bar, and he reluctantly “hooks up” with a beautiful but apparently emotionally fragile female. Mesmerized by her, he soon realizes she is the lonely girlfriend of the very billionaire he is working for.

An accidental electrocution at work flat-lines him. During a quick visit to heaven, he is informed that he has been chosen (by both good and evil) as the one who will help determine the fate of the world. There are seven humans that are at a crossroads in their lives, and he is to help them make the proper choice.

“You are the two halves together, Jim. The good and the bad in equal measure, capable of great reserves of kindness and profound depths of depravity. Thusly, both sides found you acceptable. We and…the other…both believe that when you are presented with the seven opportunities you will influence the course of events according to our values. We for the good, they for the evil – with the outcome determining the fate of humanity.”

Resistant to the idea (but comprehending the gravity of the matter) he is returned to earth, and allowed a second chance at life, while he follows through with his first assignment (the very billionaire he is working for).

As he gets to know his charges, he begins questioning the path he originally assumed they were destined for, and learns that there is a lot more to his entourage then he bargained for.

There are a few stories going on at once in this novel, with characters each struggling with their own lives and destinies.

“Marie-Terese” is in hiding (with her child) from an abusive husband, and working (and hating) her life as a prostitute.

As she leaned forward and stood in the lee of his strength, she wondered what it would be like to have a man like this, a good one who might not be perfect, but who was honorable and did right and cared about people.

“Your heart isn’t in this anymore,” Trez said softly in her ear. “It’s time for you to go.”

“You lie.” As he pulled back, his voice was so sure and certain, she felt like he could see right through into her heart. “Let me give you the money you need. You can pay it back interest-free. You aren’t meant for this. Some are. You are not. Your soul’s not doing well here.”

“Jim Heron”, struggling with his past life as a hitman of sorts, simply trying to escape from his old way of life. Mistrustful of most, he has a big heart that he hides with his sarcastic quips. Befriended by a couple of members of his “construction crew”, he begins to suspect that they may have an underlying purpose in their association with him.

“Come on Zacharias, you know the drill. A toe tag is the only way you’re truly done with us. The only reason I let you have a little vacation was because you were too close to the edge. But what do you know, you sound soooo much better now.”

“Vin DiPietro”, a wealthy billionaire who has acquired everything he has ever wanted, with his cunning ruthlessness, and powerful persona. Yet he is never satiated. Deep down, his soul continues to ache with the need for something more profound, but his materialistic ways blind him to the obvious.

And that was when it dawned on him. Maybe this was Vin’s crossroads – right here in front of the man, wanting to love him, hoping to get the chance, but losing the fight to stay connected. If the guy could just see what he had, and not as in his real estate or his cars or his statues and marble, but what really mattered, maybe he’d turn his life and soul around.

“Devina”, a beautiful supermodel, in love with Vin DiPietro. Soon to be his fiancee, she is seemingly distressing over his non-chalance in her devotion to him.

“I love him. I do…It’s just…he’s complicated. He’s a…complicated man, and I know he cares for me in his own way, but sometimes I feel invisible. And you? You actually saw me.

The eventual merging of these characters’ lives lead to an exciting development, somewhat reminiscent of the show “Supernatural”. Demons, angels, and humans living on the edge of good and evil each working for a cause that could irrevocably change the world, (including heaven and hell) forever.

This quick summary of the novel, really doesn’t do the novel justice at all. The plot is far more immersed and intriguing, but to say anymore would risk spoiling some very important and gratifying discoveries. There is of course, an intense budding romance…

Instant. Cosmic. Attraction. The kind you couldn’t hide from other people and you couldn’t bottle up and you couldn’t turn off if you ever got the chance to act on it. With their stares locked, they were both naked in each other’s arms, not for hours, but for days.

…but the danger lurks from many angles, and everything is not always what it seems. The character’s back stories are poignant, and their soul searching revelations are touching. This is a great start to what promises to be a gripping series! 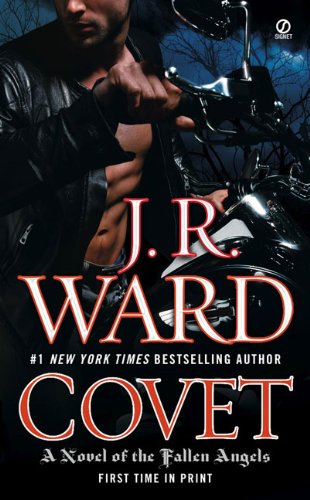 I didn’t love Vin and m-t, but I liked the world and will read the second book. We shall see…..

I did like the world too! As you had previously mentionned, the feeling of “brotherhood” and camaraderie was great, and I love books/series that have multiple important characters that seem to complete each other. I bonded with them as they bonded with each other. Yah, Adrian and Eddie…definitely keepers 😉 I LOVED them! One of my favorite parts was when Adrian and Jim finally had it out…good scene

Just found your blog! Very excited about it!! Because of your top 10 (8) paranormal series and top 10 vampire series I now have many more to check out. I have read 5 of the Breed series so far and am on book 4 of the Fever series. Favorite of them all is the BDB novels (So excited for Lover Reborn to come out!!) Those BDB boys are Yummy!! I am just about to start Covet and have heard so many mixed reviews…. I am trying to keep an open mind though! Glad to hear you enjoyed it. 🙂