Crave: A Novel of the Fallen Angels

Yup…this was good. Although I didn’t plow through it, for some reason. Great J.R. Ward writing, storytelling, action, adventure, and of course GREAT intimate (ok let’s crass it up a little, cause let’s be honest, this is J.R. Ward we’re talking about…) GREAT fffffornication scenes 😯 hehe.

Jim (the main “fallen angel” in this series) has another soul to try and save, and he doesn’t even know who it is yet. A few turn of events and he deduces that it is a fellow XOps member (Isaac Rothe) who has gone AWOL. But, like all of these soldiers know, you can never leave XOps. You’ll die trying. Just ask Jim.

His immediate goal? Fake out his former boss and find Isaac. Then he was going to get that soldier out of the country and safe…before returning to his day job of going head-to-head with Devina.

So while this undercover soldier gets arrested for cage fighting (why he was using his real name is beyond me), he is now officially back on the XOps radar. Their leader Matthias (a prominent enemy in this installment, who has NO remorse for his cold-hearted killing) has his sights set on Isaac, and will use whatever means necessary to get (and/or kill) his man.

As Isaac is released from jail, he plans on running. However it’s hard to run when your heart has bigger fish to fry (like his assigned attorney, Grier Childe). No no…nothing dirty like that. He realizes that SHE has posted bail for him, and while his only intent was to go back into hiding, he can’t do that without repaying her (despite her objections).

He wanted to scream. He was getting out of XOps because he’d found his conscience, and that meant he couldn’t take off with Grier Childe having covered him to that extent. She looked rich, but twenty-five grand was a lot of cash no matter how much you were worth. Hell, he wouldn’t have felt comfortable with even an anonymous bail bondsman eating that bill. But that elegant woman who he’d lied to? And sent on a dirty errand?

Nope. He wasn’t about to leave her in the lurch.

And didn’t that just complicate everything.

His attorney, a beautiful, privileged incredibly moral do-gooder with a large heart, also recognizes the good in her client. Sees Isaac’s pain, understands what he’s running from. In fact, she suspects her own father was one of “them”, and he too, struggled (struggles?) with some very powerful superiors. Her fortress of a house would be testimony to that. In which she offers him refuge.  And of course, they are undeniably attracted to one other. So yah…dirty like that.

“So not gonna happen, big guy,” Isaac snapped at himself.

Rubbing his eyes, he couldn’t believe he’d fallen so low as to be talking to his dumb handle. Or trying to reason with it.

All that let’s-be-smart went right out the window as he approached and loomed over her, seeing her pale skin against the dark navy sheets. She’d stretched out in the place he’d warmed not from some cozy-ass dream, but in his exertions to get away from his nightmare. And didn’t that remind him of what they were both going to wake up to.

“You sure about this?” he asked in a guttural voice. “I get down on that mattress right now, I’m not stopping until I’m inside of you.”

But Isaac has never allowed himself to love. To be a killer, he had to remain detached. And while he may have killed “morally” for the organization, his disgust in himself makes him feel unworthy of receiving the love of such a perfect woman.

“I know you’re into the savior thing. But I’m not the kind of charity case that’ll feed your soul. Trust me.”

The story is definitely one of struggle. Along with the main characters struggling with their emotions, distressing pasts, and fight for survival, Jim struggles with his new assignments in his “afterlife”, while also dealing with his deep sadness for the innocent girl slain by Devina in book #1. And of course, there’s Devina (demon/devil?) who won’t leave the three fallen angels alone (her attacks on them are quite bloodcurdling – sexually depravity at it’s worst). But why should she? It is a battle of good and evil after all, and she IS pure evil.

Seven souls. Seven chances for good or evil to win. And the first one has gone to the other side. Three more went in favor of Jim Heron and she was not only out of a “job”, but the angels took over the Earth and each and every one of her souls were redeemed.

All her work for nothing: Her collections gone. Her army gone. Herself…gone.

Devina has issues of her own (nice little twist in that one).

Very good book, lots of action, and plenty of personal time with the Fallen Angels that I hope will continue to be the center of J.R. Ward’s series.

So click here and tell me what you think of the series so far? Favorite angel? Mine is Adrian – especially after he held Jim through the night after the attack. These angels are perfect to me, despite being imperfect. 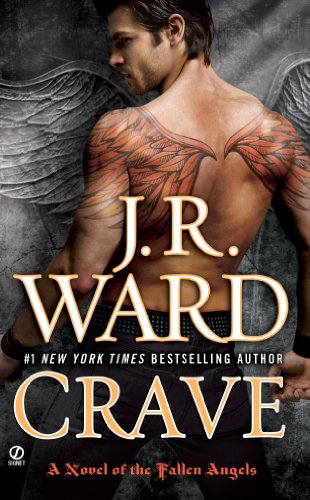 My fave angel? Adrian as well – come on who doesn’t like singing that sounds like a moose being pet with a cheese grader? And can I just add that I think it’s funny that an angel is a horrible singer?

Devina – best bad guy JR has ever written, way way better than the lessers. They bore me. What is book 3 gonna be about?

Okay, so I have to agree with both you and Lily on the favorite angel. I would LOVE to see all his piercings too 😉
I thought he was kind of a jerk at first by exluding Jim in any “inside” things, but seeing his devotion to Jim’s healing…it changes my mind.

So I guess im on the same page I would have to say Adrian is my favorite angel , and Devina she kind of reminded me alot of Zadist’s demon lover one that kept him as a slave, Im really enjoying this series so far, and the preview of “Lover Unleashed” at the end oh I cant wait, Im not sure what i was more excited about, being able to get a preview of the next Brotherhood novel or Crave, either way,,,Im going to anticipate the 3rd one Im figuring there will be at least 7
as always thanks for sharing
Jen

I honestly love the series. especially how she incorperated some of the characters from the BDB series into covet. They were placed in the same town but the characters never actually have to meet. I love it. I cant wait till there are more books. The BDB books are amazing as well. There is so much detail from the color the the hellrens eyes, to the color of rhages scales when he releases his curse. Amazing. I literally feel as though I am with the brother and the angels when I sread theyre books. Lost to my own world while I read about theyre’s. I cant wait to get lost in Caldwell with the brothers and go where ever the fallen angels are. Thank you J.R. Ward for these amazing books.