Dark Desire (Dark Series)
As mentioned in the previous book’s review, I enjoyed this book immensely, however I found it difficult to read at times due to the bouts of aggression from the male lead character.

Jacques, an immortal Carpathian, had been tortured, left for dead, and buried alive for years. Spiraling to insanity, he discovers that he is telepathically linked to a female doctor (Shea O’Halloran). While they do not they do not communicate with words, he never really leaves her mind. In his madness, he realizes that she is his only link to life beyond his grave. She feels the connection to this stranger, by way of nightmares, and eventually finds herself drawn to the Carpathian Mountains. Subconsciously, his call to her is more profound now that she is near, and, in a trance, she finds him.

Finally rescued and aided by Shea, Jacques’ frequent fluctuations between madness and sanity during his healing, are highly distressing. Even more disconcerting was how Shea’s compassion for his suffering, and desire to heal him, overrode her own sense of self preservation (considering his occasional terrifying bursts of rage). She almost seems to have an unhealthy sense of guilt towards his situation, and becomes intent on caring for him, despite the danger to herself.

Something incredibly strong in her was committed to ensuring his survival. In a bizarre way, she had lived with this man for years. He had been with her at all hours, sharing her mind, calling to her, begging her to come release him. She had left him here in this place of suffering and madness because she had not thought he was real. She would not fail him again.

While Jacques was one of my favorite characters in book one, (sweet, charming and seemingly still emotionally connected to his entourage), book two brought him to the brink of hell and back again, changing his easy going persona forever. He cannot remember anything from his past, or who he is, and where he belongs. From a savage animal to a deeply damaged man, Shea slowly heals his soul, and eases his mind back to reality, all the while undergoing repair to her own emotionally damaged heart.

As she moved past the bed, his hand snaked out, finger shackling her wrist, drawing her close.

“What?” Shea perched on the edge of the bed, a faint smile on her face, her eyes soft, even tender, although she was unaware of it.

His palm slid up her arm; strong fingers massaged her aching shoulder. Thank you, little red hair. You make me feel alive again.

Believing she is dying from an incurable blood disorder, Shea feels she has nothing to lose, and puts her remaining efforts into saving Jacques. Considering she was emotionally abandoned by her mother as a child, as an adult, Shea struggles with the idea of love, and commitment, and is disoriented when she begins to feel deeply for Jacques.

So alone. So much pain. Emptiness. Hunger. Always the terrible hunger consuming him. She found tears on her face. Her arms cradled his head, rocked him gently. “You’re not alone anymore,” she whispered. “I’m right here with you, Jacques. I’m not leaving you alone like this.”

It is still in your mind to leave me. You cannot hide your intentions from me, Shea. I have explained countless times to you. You are my lifemate. There cannot be deceit between us.

I admit, occasionally, the *Stockholm Syndrome* idea popped up in the back of my mind. Considering how they were both emotionally damaged and desperate to save each other, this was definitely not a healthy situation, however, Jacques, at times, is so sweet and helpless, that it’s hard not to wholeheartedly love him. Their chemistry is obvious, and the relationship eventually turns from one of desperation to a more relaxed (albeit intense) love.

My favorite part of the book is when the other Carpathians finally find Jacques & Shea, and struggle with their need to protect Shea from Jacques’ wild demeanor and seemingly abusive hold over her, all the while trying to bring Jacques back to his people. Their first encounter is alarming, as havoc ensues while the Carpathian men try to take Shea, and Jacques violently protects her (Shea, nearly losing her life a few times in that skirmish).

“Jacques.” Gregori’s voice dropped even lower so that it seemed to whisper-low, compelling, beautiful. “Your woman is in need of care. I offer my services as a healer to both of you. I give you my word that at no time will I attempt to harm your woman.”

Shea stirred, tried to sit up on her own, but was too weak. Look at us, wild man. They could easily kill us. I’m so tired I can’t hang on anymore.

Here’s a little something from Chapter 10 (while emotion runs high in this novel, this chapter is intensely touching). Shea’s been fighting her instinct to relinquish herself to love, and Jacques feels her attempt to pull away:

“I’ve tried to make the adjustment,” she protested. “I need more time.”

“I know that, Shea.” I should have found another way to help you heal. I am trying to find out what kind of lifemate you have. I want to be what you need, someone you can respect and love, to feed you without revulsion.” His mouth found her pulse, felt it jump under the velvet rasp of his tongue.

His lips moved to her chin, the corner of her lips. His voice was husky, aching. “Want me enough, Shea. Want me with more than just your body. Let me knot your heart.” His mouth fastened on hers, not gently but wildly, hungrily. The hunger was in his eyes when he raised his head to look down at her. “Open your mind to me. Want me there as you want me in your body. Want me coming to you wild with a need only you can satisfy. Take me into your soul and let me live there.”

This book is consistent and follows nicely into the series. It allows you to get to know the characters even more. Raven & Mikhail and even Grogori appear throughout (an interesting little twist, there, that comes back later in the series), so we get a continuation of their stories as well. The hunt for Jacques captors, keeps the story alive with excitement and Shea’s own personal history is intriguing and comes full circle. Out of the first four books, this one stands at number one in the series for me! 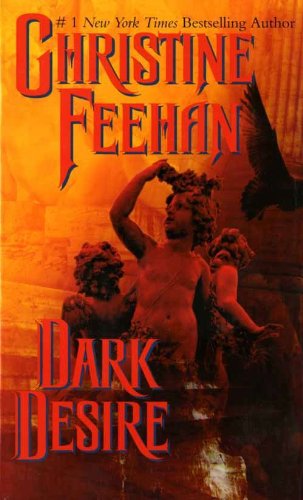 I am waiting patiently,,for some reason the bookstores around here dont carry to many of Christine’s books so i have to order them ,,,I finished Dark Prince and fell in love with the Carpathians,,,I cant wait to read this one,, and so far Gregori has really captured my eye, for me its always the darker ones that ones that be controlled that i seem to lean against,,,and crush on,,

Ahhh…yes….the dark brooding dangerous types. I’m a sucker for the “bad boy” too 😉

i read the first dark book (dark prince) loved it!!! i havent read dark desire but have read the 1st chapter and rely dying to know what will happen next!!

and same i loveeee the bad dark boys! how they can be deadly sexy and dangerous but tender and loving and they only want u and u only. u dont find to many of those in this world…unless ur one of the lucky bastards…

I like this book better than the 1st one. It was an interesting twist that the female character also has a past or has something to solve for her own mystery. I find it funny that he communicates with Shea telepathically, because he can’t talk out loud. Those seven years really has gotten on him.
Shea thought that she has a rare blood disorder but in the end she found out that she is something else. Oohhh it was also cool that she has the ability that when she touches a patient she automatically knows what’s wrong with them. (Hope I have that power so when hubby & I are in a fight I would know what’sWRONG with him. Or am I using the power in another context? hihi )
And like you, I also think that the great thing about this series is that each book build’s on the previous book and so continues Mikhail and Raven’s story.

Me too! This one was my favorite in the series (even still). It was so intense. Basically, I loved the first 3, and 4 and 5 were “meh” to me…The next one on my list is Dark Fire (I hear the series gets better again)…

I recently finished #15 in the series, Dark Secret. I believe Dark Demon is up next, but I only read these sporadically…so not sure when I’ll get to it. The books are definitely up and down, some being a lot of fun, some completely unmemorable. Maryse, you are getting ready to read Dark Fire- this was actually a really good one. The girl, Rusti, really tries to fight against the whole Carpathian lifemate business and I loved her strength of mind – she is working as a mechanic. 🙂 Let me know if you like this one after you’ve read it. Definitely one of my favorites in the series.