Another installment read, in my vast collection of Christine Feehan novels, and I found myself having a hard time finishing this one. What actually kept me going was my interest in the secondary character, Lucian. And from what I can tell about the next book (his book), I might have more interest in it, than this one

Gabriel and Lucian (twins) were both known as great warriors to the Carpathian Race. Legendary. Lucian, having already succumbed to the darkness (now vampire), and Gabriel (still without a healing lifemate), felt like he was quickly succumbing to the same fate. His only solution was to bind his brother to him and remain under the earth indefinitely in an ancient slumber. Thought to be long dead, Gabriel unexplainably awakens from his resting place. As he rises, he also senses that Lucian (his twin that he has forcibly locked in a restful sleep) is also rising. Problem. Gabriel must hunt and destroy him at all cost, a promise he made to Lucian long ago.

As Gabriel gets used to the world today (in Paris), he is starving, and fears his own darkness still growing inside. A beautiful gentle human woman sees his struggle to walk, his disorientation, and realizes that he is so obviously starving that she aids him, and brings him to her home for nourishment. When she touches him, his soul is calmed. She is obviously a healer. She is also obviously his lifemate.

Once she brings him home, he warns her that the nourishment he needs will be directly from her. Instead of screaming in panic, she calmly shows him her neck and says the words of their Carpathian people. Despite all evidence of her humanity, Gabriel realizes she is one of them. When he tells her she is his lifemate, her response is one of acknowledgement, but not of acceptance.

“Why would you fear so natural a thing? You know I am your lifemate.” Gabriel watched her closely, noting every expression. She was definitely frightened. And she had known before he had that she belonged with him.

Her chin went up almost defiantly. “I was your lifemate, Gabriel, many centuries ago. But when you made the decision to hunt vampires with your brother, you sentenced me to a life alone. I accepted that sentence. That was a long time ago. You can’t just come back into my life and decree something else.”

So that’s how it goes. Gabriel learns of Francesca’s true identity, and why she can appear (even to a Carpathian) to be wholly human, while being so obviously Carpathian. While he continues to hunt the vampires that have suddenly become so attracted to Francesca, he is also frequently confronted with her own independent spirit. A modern woman in a modern world, she refuses his “Carpathian” dominance, bringing him down a few notches. And he obeys. Yes! It’s crazy. A Carpathian that is patient, and practically let’s his woman make the decisions. This was a strange, new twist for me.

Gabriel. Her people whispered of him. Twins. Legends. They were dead, not alive. How could this be? He had taken her life away from her, forced her to live in an endless solitary existence. Now that she had finally found a way to live like a human, to perhaps have a human relationship, to live and die like the others she had watched come and go throughout the years. Gabriel had come back from the dead. What if he insisted on claiming her?

In fact, she’s got a boyfriend. And instead of simply killing him (as you would expect from a Carpathian male who has found his mate) he allows her to make the decision. Well, sorta. You’ll see.

His eyebrow shot up. “And you allowed a human to develop such a strong attachment to you?”

“Why not? My lifemate rejected me and later I believed him to be dead. I had every right to find affection if I desired it,” she replied without remorse.

“What do you feel for this human male?”

There was a soft growl in his gentle voice, just enough to send a shiver down her spine. She would not be intimidated by him. She had done nothing wrong. She would not feel guilty because he had come back from the dead. She owed him absolutely nothing.

All the while, Lucian, his twin (who is connected to him in mind and spirit, still) taunts him.

“You have grown soft, Gabriel. I was prepared for such an action, yet you passed up the perfect opportunity.”

Lucian is unbeatable. The strongest of warriors and possibly even more so, now that he is vampire. How can Gabriel protect his new found mate, from Lucian, when he allows her so many freedoms?

Meh. The story itself is interesting enough, (a few surprises along the way to make it sort of sweet) but there was barely any tension. So much potential of a story rife with jealousy and true emotional angst because of a love triangle. But no. Well, not like you’d expect. Not enough to have me connect to the characters. I didn’t feel them. Well, no…Lucian, I felt 😉 He’s the reason I kept reading.

And again, as per my usual complaint about the past few Feehan Dark books that I’ve read, it’s just too much. The romance, the speeches, love declarations and too frequent-molten lava-white heat-blue lightning sex scenes are more cloying than sigh inducing. But I will persevere. I hear they get better, and since I’m not even halfway through the series, I know I’m bound to hit some good ones.

So click here and tell me…what did you think about this book (or any of the books in this series) Any favorites? 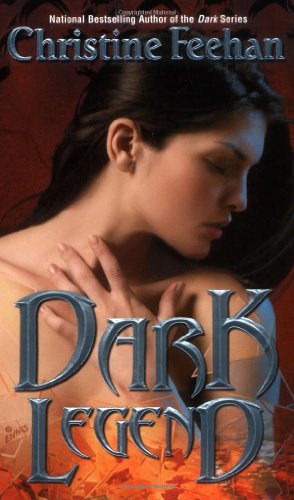 Dark Slayer and Dark Possession are my faves, but I enjoyed the whole series 🙂

Oh good! I haven’t gotten to those yet. Something to look forward to.

Anyone else have favorites?

I have to agree with you about Christine Feehan’s Carpathian books. Most everything is too “over the top”. I liken this series to a soap opera. The attitudes & emotions of the characters are so far romoved from reality that I cannot connect with them. I must say that I enjoyed a few books more than others, but in general this series was a disappointment for me. I think the book I enjoyed the most was “Dark celebration” her reunion book. It was interesting to catch up with the characters from past books.

Excellent! So far it looks like there are quite a few titles coming up that I should enjoy. Good to know…

I really liked the Christine Feehan’s Dark Series. The relationships were NOT realistic, however, it was fun to see how the relationships change to be “marriage” material. The best part for me is the story behind the romance. This is an ever darkening story that arises behind the romance and grows in the later part of the series. I enjoy the later books the most for sure and now I am hooked. It is the growing story from book one to the present that has me going. Its like the Harry Potter version of good vs evil except there are many Lord Voldemorts.

Excellent!! Glad to hear they get better as they go 🙂 I love the intensity, but sometimes, it’s too much if I try to read many in a row.

I have to agree with some of the valid points you makem especially lucian.
Dark guardian is my favourite of the series. We get to see not only a carpathian bu a man too. One that has suffered and sacrificed for his people and his own twin brother. So when lucian mees jaxon we want him to woo the girl not jus come in and mind feel her up like mikhail did with raven or rape her like gregori did wwith savannah (how mikhail didn’t hunt him down ill never knw) dark guardian has the banter and the chemistry and trust me you won’t skip their sex scenes especially as I think he’s the only one who spends morethan a minute with her before hopping in the sack. I loved this and you can’t read dark legend with out reaching for his next. I have ti disagree about julian though while I agree about your points I loved him and at least he didn’t threaten to make his lifemate a sex slave like aidan did