X
You are here: Home / My Book Reviews / Book Review – Demon Inside by Stacia Kane

Demon Inside
Book#2 in the series (this one) was “good”. But book #3…WOW!!! I read that one straight through without stopping, and I’m still thinking about it.

But I digress. This is the review for book#2, and I shall continue with it. Now when I say “good”, it’s actually more of a description of how I felt when I finished the story. I could easily acknowledge that the story was interesting, but I didn’t feel elated when it was done (like I did with books# 1 & 3). The whole first half was intriguing, and I was having a hard time putting the book down, but at a certain point, the battles became exhausting and were just a little too drawn out to hold my interest.

Megan is now the new leader of a “Meegra” (a local demon group/club/family? type thing). Hers are a group of small mischievous demons (basically, the personal demons that sit on your shoulder and entice humanity to do bad deeds). She is charged to protect and rule them, but her efforts are weak. She is indecisive and fails to exert her authority over them. She wants to rule her group with kindness (being the therapist that she is), but many of her demons are jumping ship and joining other groups. To make matters worse (to her demons) is the fact that she’s still human, and insists on not partaking in a ceremony that will make her a “little more demon”. And now, some of Megan’s demons are exploding. Yes…exploding! Ewwww….green demon gook!

But three months before she’d become the leader of the local Yezer Ha-Ra – the personal demons, tempters and misleaders of mankind – and it was her responsibility to take care of them as best she could.

Three times in as many weeks, one of her demons had exploded like this. No warning, no explanation. Just…gone, reduced to bits of squishy flesh, and she had no idea how or why.

It becomes clear that they are under attack, proving to her group, that she may not be strong enough to keep them safe. She soon finds out that demons from other families (including Greyson’s) are succumbing to the same fate, and it appears everyone is in danger.

A conversation with Greyson:

“Why haven’t you told me what’s going on? I hear this is the third one.”

“Why are you so mad at me? You said yourself, how I run my Meegra is my business.”

“I mean, you’ve lost three. I lost one two days ago. House Concumbia have lost four, House Caedes Fuiltean two, everybody’s had at least one loss. I only found out about it today.”

“I’m not sleeping with any of the others, either.”

So that’s as much of the “premise” of the story that I’m going to give (because there is SO much stuff happening at this point that it all becomes spoilers from here on out). We are introduced to a few new characters, including Greyson’s handsome best friend, a half Incubus demon named “Nick” that “power-flirts” with Megan before realizing she’s with Greyson.

Something slammed down hard, a shield of some kind, and another hand joined hers and the man’s in midair.

Greyson’s tone was light, his smile easy, but the tightness of his jaw and the coldness in his eyes told her, and the man now dropping her hand as if it burned him, how far from amused he was.

There are battles, and there are enemies (lots of them – and even some that you’d never expect), that appear to all have different motives. However they all have a common focus in wanting to destroy Megan.  Questions are answered, and you will find yourself shocked as the events unfold, providing details about her life (past and present) and the reasons she is such a target.

My favorite parts: The return to her hometown for her father’s funeral. Sweet moments and sad moments, and infuriating and frightening moments. This is where I “felt” the book. And that’s what it takes for me to truly enjoy a story. I need to feel it.

One quiet moment between Greyson and Megan, after an unavoidable and particularly scary moment with an opposing Meegra head:

He paused. “Some demons consider it a…an honor, to be allowed blood. An intimacy.”

It fell into place then. His refusal to look at her, his tension, his anger – it had seemed excessive, hadn’t it, over something that hadn’t appealed to her but hadn’t seemed like such a huge thing, especially not in the demon world.

“He took something intimate from me,” she whispered, turning so she could look at him. When he didn’t reply, she continued. “Something you’ve never had.”

Silence stretched between them, prickly and rough, before he spoke. “Yes.”

What I didn’t like as much? There were moments that started reminding me of the another popular series character where Megan could actually pull on the powers from other demons around her and use them for herself. Which is a cool concept in itself, but like the the other novels, I found those moments difficult to follow especially in the midst of a power struggle. I simply couldn’t visualize the scene enough, and therefore found myself skimming these parts.

Also, Megan and Grey…I liked Grey in this book, but Megan’s insecurities (towards him) got to me. She saw him as emotionally distant, and therefore she was distancing herself, too.

Personally, Grey seemed perfectly fine to me, so it felt like a lot of wasted love scene potential. Or perhaps it should have actually been written in a way where Grey really was distant so that the reader could feel Megan’s turmoil. The chemistry was there (especially in one scene that was woooohoooo HOT!!)

“Go on, Meg,” he gasped. The pressure on her neck relaxed as he pulled her face closer. His eyes glowed like traffic lights, redder than she’d ever seen them. “Whatever you want. I can take.”

but either there was just not enough of “the two of them”, or they were simply not as connected as I would have liked. Emotional moments, yes, but I didn’t feel them as much in this installment.

But that’s okay, because book #3 makes up for the “not feelin’ it” part. Whoa…my heart could barely stand the agony (and that will be my next review). In fact, it appears I’m a sucker for emotional punishment. Yet again, Stacia has me hooked, so I’m gonna re-read most of book#3 tonight 😉 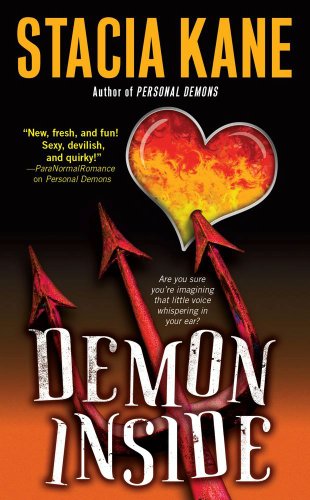 So addictive, we are gluttons for punishment.