Destined for an Early Grave
I was lucky enough to find this book one day early. I LOVED this book! Loved it! I have read a ton of books that have somewhat entertained me lately, but this one kept me wide awake until the wee hours of the morning, and then I woke up again a few hours later (purposely) to read some more before work!

It sucked me in quickly, and I was once again, right at home with Cat & Bones and the crew (despite it  having been many months since the last book in the series). I wondered if I would have any difficulties enjoying the action packed pace, again (as opposed to all the sugary vampire romance I’ve found myself reading lately). Not only did I get right in into it, I think I simply prefer this style. While the romantic tension is always an important part of this series, the lover’s turmoil is never “eye rollingly bad” (their “issues” always seem quite authentic and valid).

Bones and Cat discover that the haunting nightmares she is having, lately, are actually dream manipulations by an opposing (and handsome) vampire trying to claim Cat as his own. While she insists she doesn’t know him, secrets that are slowly revealed indicate a past that could alter her perception of life as she knows it, and threatens to tear apart the only true loving relationship she has ever known.

Bones continues to be possessive, protective,  and downright sexy;

“I think I should go to Don,” I said finally wiping my eyes. “He has facilities I don’t know about, and they’re built to withstand bunker-buster bombs. I could wait there until things calmed down. And then I wouldn’t be jeopardizing everyone around me-”

Bones filled the doorframe behind Spade. I hadn’t even heard him come up the stairs; he’d moved almost as silently as Fabian. Green glinted in his eyes, and his expression was granite.

“In case you weren’t paying attention, Kitten, I’ll say it again. You’re not going anywhere. Not to Don or to anyone else. You’re mine, so don’t mention leaving again.”

The writing is as witty as always. Cat’s internal musings are hilarious. Her “speak before she thinks” ways, and the reactions from her entourage will keep you laughing out loud!

Here’s an example. Do you remember Mencheres (the ancient Egyptian vampire who is head of Bones’ line? Serious and wise, and all powerful?) His usual “serious” side takes on a silly twist. While the crew is discussing a serious and potentially dangerous issue, Cat finds herself irritated by his personality:

“Then you remember the dream,” Mencheres stated. “That bodes ill.”

The fear of that made my reply snappy. “Hey, Walks Like an Egyptian, how about for once you drop the formal stuff and talk like you live in the twenty-first century?”

I laughed and re-read that twice. Such a spontaneous reaction, and it endeared me to the usually “scary” Mencheres.

The connections between the numerous characters continue to grow. I adored everyone, and relished the huge support each character lends to the other, regardless of unresolved tensions. Vlad was particularly wonderful, and had a few sweet and compassionate moments, himself.

Everyone around Cat soon finds themselves fighting deadly battles, that threaten to erupt in an all out war, while Cat struggles for her own sanity and memories of her past, and battles to keep Bones and her together.

Chapter 17 was devastating. The blowup between Cat and Bones felt so real, so intensely desolate. Here’s is a tiny excerpt. It doesn’t come close to the emotional force of this confrontation played out in the entire chapter, but if this doesn’t hook you into wanting to read more, I don’t know what will…

Bones still didn’t look up. “If you’ve come to say goodbye, you needn’t bother. I don’t need a tearful explanation. Just walk out the same way you came in.”

A lump rocketed up in my throat. “Bones, that’s not-”

I’d been about to smooth my hand across his back when he knocked my arm away so hard, it spun me.  Now Bones was looking at me, and the rage in his gaze pinned me where I was.

All I can say is I want more!!! Thank you Jeaniene for your incredible imagination and clever writing.

In the meantime, I have a favor to ask. I have given out recommendations to my readers as to what I recommended after the whole Twilight saga.

Now that I know I prefer this style of paranormal romance/adventure, what would you recommend to satiate me until her next installment? Maybe I should just re-read the whole series again? Yeah…that sounds like an idea! 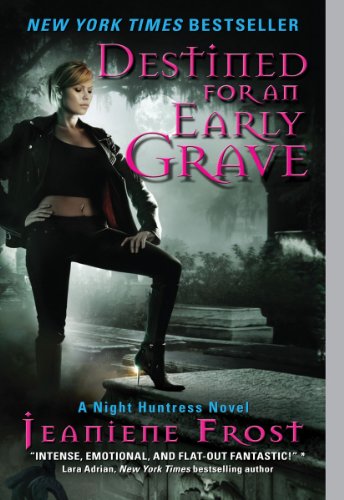 I read this book last night and LOVED it!! For all the reasons you mention. THere is just something about Bones that I love. The chapter where they fought had me almost in tears, and I never cry when I read. Such a good series!! Great review!!!!

Thanks!! I know, I rarely cry when I read too (I will admit to crying when Edward told Bella he was leaving her for good) *cringe* ok ok – I was a newbie then 😉

but Chapter 17…I dunno, there was just *something* about it that made it seem SO realistic, and made me love Bones that much more.

It’s one thing to speak words of sugary sweet love in a romance novel to emote feelings, but his absolute devastation at what Cat had done, now THAT was love….

i’ve read all the cat/bones books so far! they’re my favourite paranormal romance series AND my favourite vampire books. just so entertaining! every sad, happy, irritating, angry emotion in there is so entertaining, keeps you smiling and wanting more!

One of my favorites too!! I can’t wait for Spade’s book.

I don’t know if you have read it yet, but there is a series called ” The Black Dagger Brotherhood”. Is is by JR Ward. There are about 8 or 9 books including a handbook that the author uses to ‘interview’ characters, it has a short story, etc. While I love Cat and Bones, this other series is sooooooooooo good. Its what got me started. Please try them out. The first one is with Wrath the Vampire King and Bella, a human (soon to be vamp) as they are vampire born and not made. Its called ‘Dark Lover’. So cool. Try it out. I promise you wont be sorry.

Hi Jonelle! You are SO right about BDB!!

Honestly, I’ve been thinking about it, and I think it is my favorite series of them all. Each book that J.R. Ward releases, in my opinion is consistent and true to the series. I LOVE those guys (it is no secret that my favorite is “Z”)

forgot to add….i have read Cat and Bones twice….i’m just finishing up the last one. lol.

i love book 5… i love that scene too… its like real… i cried reading it… and Jeanniene Frost is already on top of my list of fave writers… weeee.. 🙂

Two more books coming soon! Well…one’s coming soon 🙂 but the other one is early next year 🙁

Best series out there. I had this series sitting on my bookshelf for the longest time and then decided to read it.I couldn’t put it down. I cried my eyes out in Chapter 17. It really felt real. Haven’t found a series to match it yet.Can’t wait for the new one to come out in December.I know another book is coming next month but I need a Cat/Bones fix. I wish the next book would be Vlad. Loved him

Oh boy do I LOVE that series too. I love when Vlad comforts her while she sleeps in his bed, but just for comfort. What a touching moment… He’s always so great with Cat.

I loved the night huntress series! I am looking for a replacement series, any recomendations? I’ve already read BDB…

Oh I already have one for you. If you’re in the mood for more of that dark, action packed urban fantasy with an intense “love” triangle, read Stacia Kane’s “Downside Ghosts Series” (three books in the series, and more to come). I just wrote a review and can’t stop thinking about it. It’s THAT good!