You are here: Home / My Book Reviews / Book Review – Disturbing His Peace: The Academy by Tessa Bailey

Disturbing His Peace: The Academy
<— Yep. Tessa and her hot cops did it again. They had me swooning and fuming, and then back again. 😉 I’d say I loved this one AS much as book #1, but for totally different reasons.

Where Charlie, the hero in Disorderly Conduct had me giggling like crazy with his cocky, self-assured silliness (and such a pain-in-the-butt but in an endearing way – you’ll see…), his brother Greer in THIS book?  Ooooooooh now THAT is my kind of man.

No-nonsense, overly serious, brooding and the best-of-the-best at what he does.

The lieutenant might be a jerk, but he’s on the side of justice. Like a superhero who’s power is being a prize d*ckwad.

Protective, jealous and possessive, to the point of just being an ass.

LOL! But oh my my my how could I possibly ever resist him? The way he took control,

A shiver snakes up my neck. “Are you asking me or telling me?”

His jaw ticks. “You want the truth?”

I have no idea if I won a victory with the lieutenant… or set myself up for more disappointment.

Oh yesssssssssss. I was right there with the heroine, hook, line and sinker. Greer runs deep. In fact, as “light and fun” as these contemporary romances are, all three have characters with, well… character.

And don’t get me wrong. These are easy reads, but fulfilling with a touch of heart-tugging angst in each one. They come full circle, and I’m always beaming by the time I hit “The End”.

Tasha: Do you have to read the other books in the series for Disturbing His Peace?

Maryse: Tasha, no you don’t (the series is about 3 roommates and they are all training to be cops – so each one is about one of them – the characters of course crossover since they’re all best friends). And in this book, you get to finally know their Lieutenant who is TOTALLY NO NONSENSE (and the older brother of one of them). He’s been in all the books in the background…

marina:  It’s been this slow tease reading about Danika and the Lieutenant and I NEED to know what happens with them!!! So excited to read. It’s been a great book roll.

Maryse: This hero is the bossiest, most obnoxious, jealous, demanding, and possessive alpha-male I’ve read in AGES. And the most convincing. I wanna hate him because… I. AM. APPALLED. Ohhhhhh THE NERVE of him!!! AND YET I AM SO INTO HIM!!!!!! Tee hee. I can’t stop highlighting!!! P.S. And yet he is so SWEEEEEEEEEEET!!!! Oh he makes me *swooooooon*

Danika (roommates with Charlie and Jack – all in the police academy together) has been struggling to hold her own against the demanding and unapologetically harsh Lieutenant Greer (Charlie’s older brother, who readily agrees with her, regarding his ass of a brother).

Charlie has been bending over backwards in the last month, trying to improve his relationship with Greer and his father, a big-time NYPD bureau chief. Their family is a law enforcement dynasty, heavy on work ethic, low on affection. Watching my roommate spin his wheels and barely get anything in return from Greer is yet another reason I’d like to deliver a right cross to his smug, all-knowing face. It’s not the main one, though.

Oh don’t get me wrong. Danika is strong and independent and can hold her own amongst any of the officers (recruit or otherwise), but Lt. Greer just ruffles her feathers in all the wrong ways. But secretly… in all the right ways too.

She’s been raised with a large and loving family, happy and loyal and now she’s the one that her family depends on. And she THRIVES on it.

I’m a certified control freak. Ask my family. I’d rather run errands, until I’m in a stupor, than delegate. I love being the person my family relies on. It’s the reason I became a cop. That satisfaction I get from others relying on me, multiplied by a whole city? That’s what I want out of life.

And she can’t fool Jack or Charlie. They see it. In fact, they see the tension and over-attention that’s been brewing between the two of them for awhile now. Greer might not realize it, in his adamant stance against ever letting go and caring for a partner (work, or otherwise) again, but no matter how hard he resists,

There’s only one thought that keeps circling around in my head.
“You were going to wear these out with someone else.”

the pull just keeps bringing him back in…

“I don’t even want you on the phone with him,” I whisper against her parted mouth, “So make it fast.”

I know… I know. The covers are maybe a little… over-the-top cute & sexy in the potentially “formulaic contemporary romance” angle. Actually… I kind of love the covers now. A lot. 😉 They’re my book “candy” and they just fit (again, you’ll see…). And those of you that enjoy a darker, or emotionally complex read might worry that these would be forgettable.

I get it. You KNOW I love the hard-core romance angst, and the scary stuff, and I tend to shy away from traditional contemporary “pure romance”.

bev: Maryse is cracking me up with all her Tessa Bailey love recently. I know you’ve read her before, but you seemed to be veering into more psych thriller or….not chick lit but romance the romance is sprinkled on top of the heroine’s journey. And Tessa Bailey is pretty straight up romance. It’s fun how our reading interests/moods take us on these different paths.

Maryse: LOL bev!!! I am right there with you. I’m deeply into psych-thrillers, but there’s something about Tessa’s books (even if a bit formulaic) that is just… breezy. Just enough goofy fun, comedy, and angst to keep me connected to the characters.

Just LOVE her!! Plus. Cops. In. Uniform.

Like bev said, I’m more often attracted to the complete unknown, potential devastation and/or shock value, when it comes to reading.

But I assure you, my friends. This is Tessa Bailey, we’re talking about. THESE are our light guilty pleasures that we end up loving to spend an afternoon with at the beach, by the pool, or snuggled into your cozy place while it rains all around you.

These just DO IT for me. Every single time a new release in this series comes out, I do a mini-squee and immediately line it up at the top of my TBR list. I ALWAYS jump in with gusto and I’m never disappointed.

4.5 stars <— Pure romance candy, but Greer is my kind of overbearing alpha. 😉 You just have to get through his tough and crunchy exterior and then you get his deliciously sweet and gooey middle. 😛 *squee!!!*

P.S. THANK YOU to the publisher for sending me this review copy!!! I always get excited when I pull a new Tessa Bailey out of mailer!!! 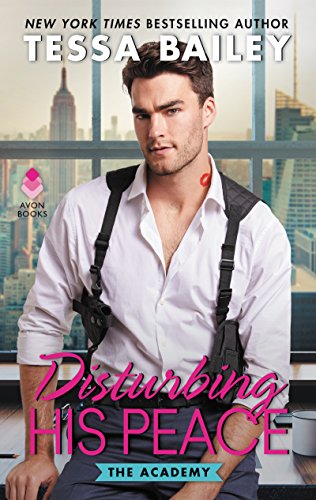 I’m almost done with this one.
I love reading a good paced CR. Especially if they have banter and chemistry as I mentioned in the Lucy Parker post.
Try that one.
I’m going right to another CR after this by a new to me author. A Girl Like Her by Talia Hibert. One I really do not read a lot of books with poc heroines and the intro to the podcast, haven’t listened to it yet but where I came across her, said they talk of “the allure of pining heroes in pursuit” and I was all…..ok, one click, lol.

I have the first one from Lucy Parker!!! 😀

While we are fangirling on Tessa Bailey, PLEASE check out Getaway Girl. I swear I think it’s going on my all-time top 10 CRs. Love it, love it, love it. Doing a quick re-read of that one right now, but sounds like I’ll be moving on to this one next.

This series sounds right up my alley!

Jean!!!
I may not have recommended it to bev (especially not in her current slump… and the books I KNOW she connects with)…
BUT YOU? YES!!!! LOL!!
What you see (in my reviews and the covers) is what you get. 😉 If the book quotes speak to you, this is yours!!!!

LOL!!!! *snuggles bev*
Just being honest. I know what you like bev and I was a bit nervous/appalled seeing you jump into this one upon a “number’ recommendation.
Tee hee!!!!!!
😛

Maryse, I may have to jump to them. I’m reading At This Moment and just can’t get into it. So much trepidation from reading others comments and already not giving Billy a chance. This is not how I want to feel when reading a book.

That is so funny.
It was actually the first in my tbr because I’d one clicked it with your jealous possessive hero descriptions. That sometimes leads to groveling hero which is fun.
I’ve read her before but your right it only really kept my interest for part of the book.

Uh oh Jean.
Nope. Put the book down. Watch Fight My Way instead.
Friends to lovers…look at the cute.
https://youtu.be/8AsGVvzLoeE
Maybe I should try the book? Let’s trade. You read I watch.

So agree with your review. I love light guilty pleasures lately and her books are always so great. I am starting Before We Were Yours for book club and I know it will be good but I need light reads. And ones which hook me from the start.

Loved all 3! That’s it for the series right? I’m sure she will have something equally as awesome coming up next. xoxo

marina… that’s a good question. We didn’t really get to know any of the other recruits or officers, so it would seem so. I’M GOING TO MISS THEM SO HARD.

In an Instant by Suzanne Redfearn...you will throw your book/kindle and cry at times, but it was so so good.

READER QUESTION SOLVED!! This was the question: The series where he buys her a bed and throws away her old one and she’s livid!

Does anyone have a guess for this one?

Reader Question – The book about the girl that works at a cafe, and he keeps getting coffee just to see her…

Reader Question - The book about the girl that works at a cafe, and he keeps getting coffee just to see her... - Maryse's Book Blog

Reader Question – The book about the girl that works at a cafe, and he keeps getting coffee just to see her…March 5, 2021 By Maryse Leave a CommentKrista needs our book help! Ahhhhh I love the sound of this. A secret crush, and he goes out of his way to just catch a glimpse and OMG MY HEART!!!Sh...
View Comments