Embraced by Blood (A Sweetblood Novel)
I was lucky enough to go directly from my steamy paperback (book #1) into a digital review copy of book #2 (as provided by Harlequin). The book isn’t officially out just yet (coming out on June 21st 2011), but once it is released, I’ll be getting a nice paperback copy to add to my collection. I love the obvious vampirey-ness of these covers.

This was Alfonso Serrano’s book. Remember him? He was Dominic’s evil brother that joined the Darkbloods in their quest to take over the vampire world, and run the humans like a farming industry? Stupid, mean, sexy, Alfonso!!

The Darkblood Alliance believed their kind belonged at the top of the food chain – they had no regard for human life. They didn’t want to blend in; they wanted to dominate.

But… we might have been mistaken in our assessment of him. This book shows us a different side of Alfonso, and the deep dark secrets he had to keep to stay alive, while privately assisting Dominic’s team, as an informant, behind the scenes. Of course, Dominic didn’t know this. But Lily sure did. Remember Lily? She is on Dominic’s super-secret vampire law enforcement team. Alfonso was HER connection (in more ways than one 😆 tee hee!!) Dominic didn’t even know that one of his favorite team members was “canoodling” with his worst enemy! His own brother!

So here’s how this story goes. Lily loses her rookie “tracker” trainee to the Darkbloods. They are looking for “trackers” (gifted vampires who are able to scent and find anyone and anything). Yup, like a blood hound! Ha!! Funny! Her abilities do sort of remind me of a half vampire/half werewolf type thing, but I digress. She’s just vampire, and I’m probably just confusing you all 😉

Anyway… Alfonso and Lily are forced to work together, to find her trainee, cause Lily’s tracking abilities are mysteriously lacking and they realize that the Darkbloods were actually hunting her (but snatched her rookie instead). Due to her amazing tracking reputation, the evil vampires want to bring her to the darkside so they can use her to track more Sweetbloods, meaning she’s in danger too. You can never have too much backup, and an ex-lover/ex-evil vampire will work in a pinch!

It’s a “close quarters” road trip between two ex-lovers (oh right I forgot to tell you… Alfonso dumped her after the Darkbloods realized he was a traitor). He needed to go into hiding, and work out the details of how to stay alive while not endangering her life (cause you know… the Darkbloods were ticked at him for spilling their secrets and helping kill their leader – yup… it’s on now). So he dumped her.

But he didn’t TELL her he was dumping her to keep her safe, while he fixed his situation. Nope. He told her he wasn’t in love with her anymore. But of course that’s what he tells her…because that’s what normal men are supposed to do, right!? 🙄

So why is he back? Well, Santiago, the chief of whatever the good guys are, persisted in finding ways to keep Alfonso busy in the good-guy group and having him officially/unofficially work for them.

“I’m serious, Alfonso. Your expertise on Darkblood matters is unequaled by anyone in the Agency here in North America. It’s a shame you’re pissing away that talent and knowledge…”

And the best way to keep him on board was to tell him Lily’s life was in danger now that the Darkbloods were specifically looking to capture and use her.

Mr “I’m not in love” Alfonso, the alpha vampire can’t control his need to protect his “you’re not my woman” woman, and well, you know how it goes. Together… again. But not really. And that’s the “gist” of their love story.

His nonchalance fanned her anger and every muscle in her body went rigid. How could he be so calm and act so totally uninterested. They hadn’t seen each other in a year. The least he could do was shake her hand or give her a hug. Tell her she looked good or something. Like normal people would do. Normal people who’d once shared something special. God, she was so stupid for thinking he’d ever cared for her.

She’s been hurt (badly) by him and fights her lovesick heart tooth and nail, while he resists the urge to love her (and bite her… because that’s how they bond in the vampire world). Openly loving her means she would become a liability. So he fights his heart with his need to protect her and he INFURIATINGLY keeps his distance (mind you…it was fun 😉 I LOVE the game!)

Not once had he made love with her without taking her blood, and now that he was marked for assassination, he’d never risk her life like that again. Unlike before, this short-lived assignment would be strictly platonic.

And of course, there’s more. The road trip uncovers more Darkblood Alliance secrets. Evil guys (that desperately want him, and all that he loves, dead), the hunt, the discoveries of their elaborate operation. And then there’s Dominic. His hatred of Alfonso is through the roof. How will he ever overcome his hatred when he blames Alfonso for the death of their parents. There is ALOT these two don’t know about each other, but is it too late? Can they repair such a devastated past. I mean, Alfonso DID do some pretty bad stuff once… but is there more to his story?

“I worked for centuries on the inside, trying to redeem myself in the eyes of everyone I cared about, and for what?” He pounded a fist on his on his thigh and a sharp pain pierced through the dull ache in his knee. “I’m permanently injured and my family wants nothing to do with me.”

This was a great book. The romance in book#1 captured me a bit more, but this book had plenty to keep me interested. The author has a knack with the little nuances, side stories, and sweet moments that make these characters real. She knows them well, and now, I think I do too. 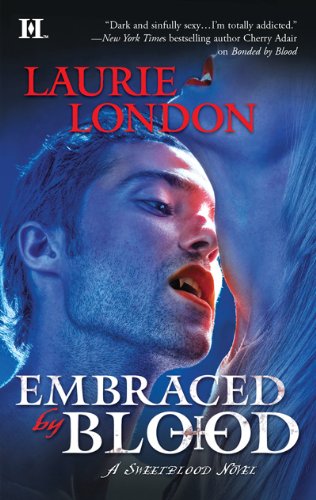 Didn’t read the review *for obvious reasons* but am happy you liked it 🙂 Oh, and I wanted to be the 1st to comment…hehehehe

I love your review! Your are the review goddess! I always check your website before I choose a book to read for pleasure.

I just got done reading this book yesterday and I really like the story, too. I need to post a review on GR and my blog.

Thanks Laurie!! So next we’ve got the muscle-head-sandwich-eatin’ machine 😉

I haven’t crushed on him much yet, but I’m hoping his book will do it.

Great review, I Loved this one too 🙂 Hidden by Blood is a freebie that goes in between Bonded and Embraced. Grab it while it’s free-you’ll love it.

Hi Laurie!! Thanks so much for that 🙂 I found it. I don’t think it’s a freebie anymore (at least not on Kindle) but happy to have it!