Evermore: The Immortals
I read this one in just two evenings and it was just what I needed to get a little “break” from the intensity of the Outlander series I’ve been involved in. While it didn’t blow me away, it had a bit of everything to keep me interested. A little personal (and warranted) angst, a love interest that ends up causing even more angst, some questionable behavior (that is never answered until the end – so it keeps you guessing), and of course, plenty of paranormal activity 😉 Be forewarned, it is a YA series, so a lot of the drama is due to personal inexperience and typical teenage hormones, and you get the usual “mean girls” cattiness, but I always get a kick out of those things (now that I don’t have to suffer them).

“Ever” is a 16 year old who has just survived a deadly crash, where her parents and little sister perished. While she almost “crossed over”, something pulled her back. Uprooted from her regular life as a popular, pretty teenager, she is moved across the country to California to live with her workaholic aunt. Depressed and insecure, she is now dealing with “gifts” that she feels she must keep a secret (she can see ghosts – strangely enough, she has her ghost of a little sister to hang around with, auras, life events etc…). Determined to get through her new high school life in “recluse” mode, she befriends only two other people, sulks in her hoodie, and blocks out the “mean girl” snickers with her iPod.

Her life changes however, when a gorgeous new student, named Damen shows up in her class. She is captivated by his good looks, but also by something else…

But it’s not his complete gorgeousness that has me so transfixed. It has nothing to do with that. It’s mainly the way the entire area surrounding his body, starting from his glorious head and going all the way down to the square-cut toes of his motorcycle boots, consists of nothing but blank empty space.

No color. No aura. No pulsing light show.

Damen seems interested in befriending her, so she slowly lets her guard down, and lets him in. But Damen is confusing the heck out of her. He literally runs hot and cold. From wooing her with tulips, trying to get through her defenses, and being there for her, to ignoring her completely and flirting with the main mean girl (and publicly giving her rosebuds!! Right in front of Ever!! UGH!!).

He takes a deep breath then shakes his head as he says, “Ever, it’s not what you think.”

I pull away and press my lips together. You have no idea what I think.

“Let me make it up to you. Let me take you out, somewhere special, please?”

From spending meaningful time alone with her, to simply disappearing from her life for days. From telling her how special she is to him, to her realizing she still doesn’t even have his phone number!

And as I glance from her to him, my body fills with a cold hard dread. “How do you know each other?” I ask, noting how Damen’s entire demeanor has changed, suddenly growing chilly, cold, and distant – a dark cloud where the sun used to be.

Yes this guy drove me crazy! What was his problem? What games was he playing, and why? Was he the good guy, or the bad guy? All of this drama (even though somewhat childish) kept me reading. I was dying to know.

It’s not like I didn’t know better. So I shouldn’t feel surprised.

Damen’s a player. Pure and simple.

Tonight just happened to be my turn.

One thing for certain, however, is that, reading this as an adult, I did not like some of the messages I was receiving on the relationship end. The whole, “putting up with a hot guy’s games” just cause you have a terrible crush on him and can’t bear to stay away, was disturbing. I wished that Ever had a little more “hard-ass” to her, when it came to Damen. Ever was a vulnerable teen, that had already been through so much, and the games she endured, the turmoil she had to work through at the expense of her heart really irked me.

Well, I guess there are all kinds of young girls in the world. Maybe deep down, I understood where she was coming from, and that’s probably what bothered me the most. Working one’s way through the maze of crushes, lust and true love in a young woman’s world is bad enough, but to have it happen to a girl who already lost her whole world… *if* Damen is the good guy, then he should have known better.

But, it’s not just a romance, as there is more to Ever then meets the eye (stuff she doesn’t even realize). Overall, a good book, a few little surprises (I thought I had it figured out, but I was wrong), and I will be continuing the series. My Facebook friends seem to love it, so I’m looking forward to more adventures (and hopefully, angst – I’m a sucker for it).

Has anyone else read the series? Any thoughts? 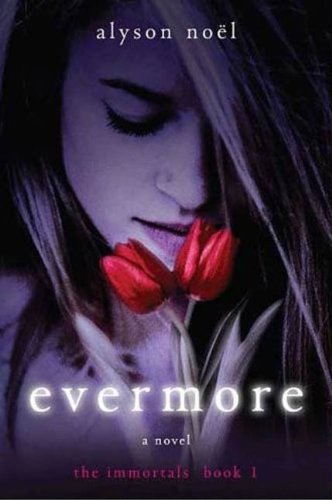 I liked the series. It was not Vampire Academy by Richelle Mead. But it did keep my interest. I read Night Star when it came out a couple months ago.
The final book in the series comes out I think sometime next year.

I enjoyed the series enough…coarse Ive only read to Shadowland..but so far there is enough twists and turns and excitement that keeps it interesting enough..to want to continue thru the series..

Hey, been awhile since I commented!

Well, I don;t know how far into this series you’ve gotten, but I think she does eventually get more backbone. This series.. I liked it at first, but the last book didn’t leave much of an impression I will still read the nex one when it comes out though, I always hope for a revival. 🙂 To avoid spoilers I will just say that one of the characters becomes very dramatic, and I think it was a bit much for me..

This book was “okay” for me, but the one that followed was to much to even finish. It just got childdish really quick.

I heard that the second one wasn’t such a thrill…

Lol…That’d be the understatement of the year

I read all of these books, I was ADDICTED, I could not’ stop reading them.

I wasn’t really that interested in this series. I mean, they were great to read when I was in between other books. In fact, as weird as it may seem I actually liked the books about Riley Bloom, Ever’s little sister, who actually did die in the car crash even better. They are actually for pre-teens, I think, so nothing adult bookish about them whatsoever, just cute books to read.

I loved the first book, but it went downhill afterwards. I felt like I was reading the same book over and over. It’s always the same thing. She loves him, He loves her. She doubts, she does something stupid. She realizes that she made a huge mistake. He tries to find a solution to fix it, but so does she and she makes it worst and we start again! I couldn’t even finish the 3rd book. I was so bored. He loses all of his bad boy charms after the first book and they become as boring as an old married couple! Really after a while I was just screaming inside. Break the curse and finally sleep together for pete’s sake! Because really that’s what all the books in this series revolves around. Finding a way to finally consume their love after 400 years.

It had potential, but I felt like the author didn’t know how to get her story to evolve.

I don’t know what everyone is talking about???? This series is AMAZING! So amazing i wish i could put more emphasis on AMAZING! Haha! I LITERALLY just got done reading Shadowland and I am planning to read the rest of the series! I love Alyson Noel’s book works! 🙂