Forbidden Nights with a Vampire (Love at Stake, Book 7)
This book was a pleasant trip back to the world of Roman Draganesti’s entourage. The Malcontents are still up to their baneful ways, kidnapping, plotting, and bombing, while Roman’s Coven continues to grow, as shifters and good Vamps from all over assemble, to fight for his cause.

This novel focuses on Phil, an alpha werewolf, and his attraction, to a spunky, ill-tempered vamp, Vanda. While in past books, the romantic twist always involved a couple that met for the first time, and eventually fell in love, this one took a different turn, allowing us to accompany a duo that were already “friends”, (who’ve made appearances in past books).

Due to her past anger issues, Vanda is instructed to attend anger management classes, and Phil volunteers to be her sponsor. They soon realize that she is on the Malcontent’s “hit-list”, and Phil is also assigned to be her bodyguard. They struggle against their mutual attraction (and unresolved hurt and resentments towards each other).

“Excuse me for thinking you might want to keep in touch. I had thought we were friends.”

“We were never friends.”

She gasped. “How can you say that? We…we talked.”

She stiffened, “I was nice to you.”

He stepped toward her. You were bored, and you tormented me for the fun of it.”

“Don’t be silly. It was just a little harmless flirtation.”

“It was sheer torture.” He advanced another step.

“I hated it. Every time you touched me, I wanted to rip your little catsuit off and make you purr.”

To complicate matters further, Vanda does not know Phil is a Werewolf, and Phil, knowing her fear of werewolves, is afraid that she will not return his love, if she learns his secret. Vanda having her own secrets, fears that Phil would consider her a monster if he ever learned about her past.

Here is a part of the book that was such a sweet *Phil* moment. I truly loved his character in this series. (careful – somewhat of a *spoiler* here, at least in terms of Phil’s condition)

She’d been so intent on keeping her own secrets, she hadn’t let Phil tell his. “But you should have told me.” She pounded at his chest.

“Why? So you’d have an excuse not to fall in love with me?” He grabbed her hands and pinned them behind her back. “Whatever happened to my love being enough?”

Her eyes burned with tears. “But I hate wolves. I hate shape shifters.”

“You love this one.”

While the romantic moments were nice, and Phil was incredibly believable as a sexy alpha male, I did not find myself as enthralled by their romantic interludes as I have been with past novels by Kerrelyn Sparks. Everything was fairly even tempered throughout. There was some romantic tension, threat of danger, secrets to overcome, and personal growth, but nothing ever seemed to reach a height of exceptional excitement.

Here are some “Phil” quotes that I most certainly enjoyed!

“I want to do a lot of things to you, Vanda. You see, with me, you made one big mistake. I was never safe.”

“Fair warning, Vanda. Once you give me your body, I’m taking your heart.”

Despite this not being my absolute favorite of the series, any time I get to spend an evening with this crew is a good time. Ms. Sparks has woven an intricate world of caring individuals that I am hugely fond of. I hope she continues to expand on each character, as I look forward to each new book. 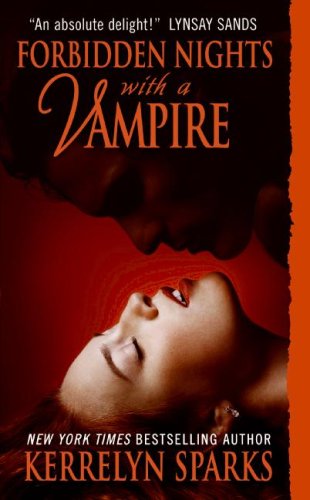 OMG! I just bought all 7 books July 5th & I just finished book 7 Friday night & I was in tears. I absolutely LOVE these books & the characters. Ms. Sparks is a WONDERFUL author. I am also reading Kelly Armstrong series. But I prefer Kerrelyn’s & I hope there’s a book 8,9,10…!! I was so drawn in I couldn’t put them down. Thank you soooo much!

Love the series, but this is my favorite. I am thnking od Bj Penn, the ufc star while reading this one book. 🙂

I love this whole series and all the characters in it. I have read through book 9, and this book 7 with Phil and Vanda is one of my favorites and was very engaging to me. Of course, as I am reading each book, it is my favorite, except for book 2, which I thought was a big slow, but it set the background for many things to follow and had its wonderful moment. What a series!