Frostbite: A Vampire Academy Novel
Frostbite was very exciting, and really put the story into high gear. Halfway through the novel, I took a short break to purchase the 3rd, as I knew I wouldn’t be ready to stop once this one ended. I must apologize in advance, for how much I quoted some parts. I, myself, couldn’t describe the intensity (the “feel”) of the book and do it justice. I felt the book’s own words say it best…and I’m certain you’ll agree! (Not to worry! I don’t believe I let loose any spoilers in the process)…

So here it goes!

Nearing the Christmas holiday, Royal Moroi families (good, “born” vampires) were being attacked by groups of Strigoi (evil vampires). Evidence indicated that the Strigoi were working with humans to be able to attack during the day, and break through the magical wards that normally kept out the “Undead”.

There had been a ward here, but it had been shattered when someone drove the stake through it. Their magic had conflicted with each other; the stake had won.

“Strigoi can’t touch stakes,” I told him. I realized I was using a lot of can’t and don’t statements. It wasn’t easy having your core beliefs challenged. “And no Moroi or dhampir would do it.”

I met his eyes. “Humans don’t help Strigoi-” I stopped. There it was again. Don’t.  But I couldn’t help it. The one thing we could count on in the fight against Strigoi was their limitations – sunlight, ward, stake magic etc. We used their weaknesses against them. If they had others – humans – who would help them and weren’t affected by those limitations…

The Academy decides to send all of the students (and their respective families) to an isolated and highly guarded ski resort normally reserved for the Royals. Together, the students would be able to celebrate the holiday season with their families, and everyone would be better protected.

While the school trip excites everyone (lots of fun to be had – and there was), a threat continuously looms over Dhampir guardians and their protected Moroi. Until they figure out exactly what the Strigoi are up to, no one is ever really safe.

As strategies are re-evaluated, the different classes of Moroi end up in their own power struggle for survival. In the recent past, the Royals normally get assigned the Dhampir Guardians, while the common Moroi are finding that they might be left to defend themselves. Since Moroi’s no longer use their magic for attacking or defense (and are not instructed in any combat techniques), their numbers are dwindling, along with the dhampir that protect them. Some feel it is necessary to evolve with the times, fighting side by side to protect each other with the dhampir, while others insist on keeping with tradition.

This being the main part of the story (essentially, the beginning stages of evolution of a society), the reader is satiated by the way of personal interactions, and emotional connections. Lots of human feelings that allow us to get involved in the story on a deeper level and to care for the characters that are in danger.

There are a few new love interests for Rose to contend with, the main one being Christian’s beautiful aunt, Tasha. She has the heart of a warrior due to a terrible attack that she had to overcome, and as a result, has kept up with her own physical and magical abilities. Her advanced thinking, and insistence in the necessity of change allows her an independence most Moroi do not realize they should have. She becomes the voice of a new revolution, and many begin to admire her. Including Dimitri…

I felt like someone had ripped my heart out and tossed it across the other side of the room. There was a burning, agonizing pain in my chest, and I had no idea how it could ever be filled. It was one thing to accept that I couldn’t have Dimitri. It was something entirely different to realize someone else could.

“Of course,” he said, showing no indication we’d discussed anything other than class matters. “It’s like everything else. Balance. Know which things to run forward with – and know which to leave alone.” He placed a heavy emphasis on the last statement.

Our eyes met briefly, and I felt electricity race through me. He did know what I was talking about. And like always, he was ignoring it and being my teacher – which is exactly what he should have been doing.

Their romantic tension escalates… While they continue learning about each other, he persists in resisting her emotionally. Rose, adamant in getting her way, forges on, sometimes, to a breaking point.

“Okay can we just stop this for once?” I demanded, hands on my hips.

“The whole profound Zen crap thing. You don’t talk to me like real person. Everything you say is just some wise, life-lesson nonsense. You really do sound like a Christmas special.” I knew I wasn’t entirely fair to take my anger out on him, but I found myself practically shouting. “I swear, sometimes it’s just like you want to hear yourself talk! And I know you’re not always this way. You were perfectly normal when you talk to Tasha. But with me? You’re just going through the motions. You don’t care about me. You’re just stuck in your stupid mentor role.”

He stared at me, uncharacteristically surprised. “I don’t care about you?”

“No.” I was being petty – very, very petty. And I knew the truth – that he did care and was more than just a mentor. I couldn’t help myself, though. It just kept coming and coming. I jabbed his chest with my finger. “I’m another student to you. You just go on and on with your stupid life lessons so that-”

The hand I’d hoped would touch my hair suddenly reached out and grabbed my pointing hand. He pinned it to the wall, and I was surprised to see a flare of emotion in his eyes. It wasn’t exactly anger…but it was frustration of another kind.

“Don’t tell me what I’m feeling,” he growled.

I saw then that half of what I’d said was true. He was almost always calm, always in control – even when fighting. But he’d also told me how he’d once snapped and beaten up his Moroi father. He’d actually been like me once – always on the verge of acting without thinking, doing things he knew he shouldn’t.

“You’re always fighting for control. You’re the same as me.”

“No,” he said, still obviously worked up. “I’ve learned my control.”

Something about this new realization emboldened me. “No,” I informed him. “You haven’t. You put on a good face, and most of the time you do stay in control. But sometimes you can’t. And sometimes…” I leaned forward, lowering my voice. “Sometimes you don’t want to.”

Their terrible longing  is incredibly palpable (just what I love in a romance saga). The turmoil, here, is substantiated (not just thrown in there for dramatic effect). The feelings seem real, the characters – genuine.

I loved this installment even more than the first one. While the first book was an introduction to the cast, and their stories, this one seamlessly leads us into their souls. 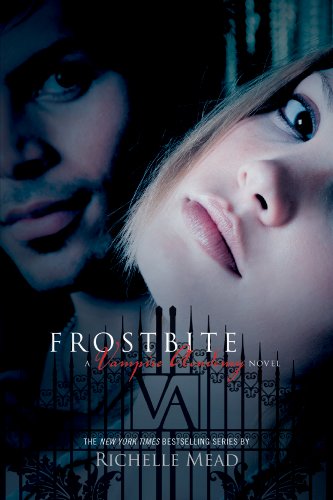