Gwendy’s Button Box
It’s creepy. It’s magnificent. And for me, it’s an easy 5 stars for just having sucked me in right from the very start, and having never let me go. I didn’t put it down (at least… not by choice). 😉

Sure, it’s a shorter read, but I honestly felt like this story was complete (mind you, I’d love some sequels… there’s much story potential here).

And personally, if I were you, I’d stop reading this review right now, and JUMP IN to this eerie story, and escape for awhile. 😉 Go in as blind as you can. Trust me. It’s worth it, even if you’re not a horror (or scary story fan). This one is so much more than that.

By the end of THIS one, I felt as if I had actually understood the message. Scary-ish reads that are also emotionally fulfilling? Yes. This would be one of those, and I have no doubt that ANYONE who reads this, young or old, will be able to connect, and maybe even relate in some way.

Maryse: I just want to say, I’m halfway through “Gwendy’s Button Box” and I’m captivated. It’s absolutely brilliant, and so clever (but an easy read).

It’s a collaboration story with Stephen King and Richard Chizmar, and while I suppose it’s considered “horror”, it’s so much more than that. Not so much… scary, as eerie, and thought-provoking. I’m devouring it! I have NO doubt that so many here would devour it, too.

Everyone knows I’m a huge horror fan, and especially of Stephen King. He’s got a very personal, unpretentious way of writing about things that are unfathomable. The most terrifying terrors, so smooth and readable, that you don’t even realize you’re absorbing the horror within you, until you find yourself keeping the lights on at bedtime… at least for a few days after one of his stories.

Some of them are, of course,  a little bit out there, but there’s just something so horrifically realistic about his imagination, that I can remember EVERY single story I’ve read by him… and continue to be delightfully haunted by each one.

So after reading THIS blurb, I got a case of the “heebs” right off the bat. I had no idea where it was going to take me… a pretty vague intro to say the least, but the feeling… the ambiance, was set.

On his head is a small neat black hat. The time will come when Gwendy has nightmares about that hat.

And it did not disappoint. In fact, I was pleasantly surprised (already fearing some awful things from how that blurb ended), but it turned out to be incredibly… enlightening.

So what’s it about? I’m gonna make this short and sweet so you go into this as blind as you can.

It starts us off with a preteen, about to start high school, and struggling with the typical pre-teen angst. Bullying from certain cliques, wishing she could lose weight, wondering if her parents were going to be okay as they grow distant from each other.

And one day, she’s called over by a man. A stranger, but one that seems to know her well. And while she’s leery, there’s something about him that makes her feel comfortable enough to listen to what he has to say.

“Stay a bit longer. You see, you’re one of the people I’ve been keeping an eye on just recently.”

This should sound sinister (and does, a little), but he’s still smiling in the aftermath of his laughter, his eyes are lively, and if he’s Chester the Molester, he’s keeping it well hidden. Which, she supposes, the best ones would do. Step into my parlor, said the spider to the fly.

“I’ve got a theory about you, Miss Gwendy Peterson.

He presents to her, a beautiful wooden box. One that she feels an immediate kinship with. As if she knows it belongs to her. But she’s never seen it before.

And this box, has a few colorful buttons that can be pushed down. And a lever, that dispenses treats and favors to her. He cautions her, albeit, without an exactly-worded warning, that she is fully responsible for the box, and what it’s capable of. He vaguely lets her know what each button is responsible for. And what the treats mean for her.

“It’s yours. Everything that comes out of the box is yours— the candy and the coins— because the box is yours. The current numismatic value of that Morgan dollar is just shy of six hundred dollars, by the way.”

“I… I can’t take it,” she says. Her voice is distant in her own ears. She feels (as she did when she first started her runs up the Suicide Stairs two months ago) that she may faint.

“I didn’t do anything to earn it.”

He leaves her, essentially still a child, with the potential power and weight of the world. Literally. In. Her. Hands.

And this is her story (at least that of her young adult to new adult life), and with just a few telltale twists (some that I remember from my own childhood), I was subtly shocked and awed. What a short, distressing but poignant thrill this was!

Eye-opening. Thought provoking (you’ll see why). All of this, in the most eerie and spine-tingling setting, and while I was chilled to the bone and had a constant subtle thrill of what was yet to come, I was never truly terrified, I was never grossed out (and for many that fear scary stories, I know that’s a good thing).  I was just completely entranced.

It’s when you look further than the story, as it is, that the real story opens up. The bigger picture. A whole other perspective. And that’s what will make this one utterly unforgettable.

5 STARS!!! <— These two wonderful authors need to continue this story. I NEED IT!!! Make it a series!! 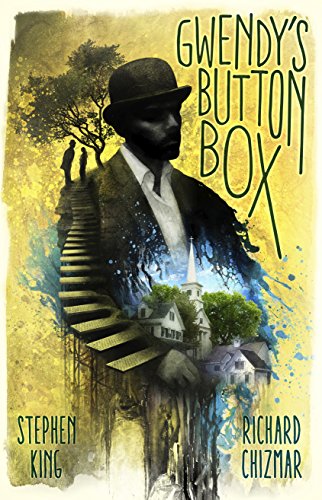 I had never read Stephen King until recently. I listened to 11/22/63 on Audible. It was AMAZING!! One of my favorite books! I have always loved reading about the Kennedy family, so I’m sure that helped, but this book just sucks you in from the get go. I will add Gwendy’s Button Box to my TBR list.