X
You are here: Home / My Book Reviews / Book Review – If I Were You by Lisa Renee Jones

If I Were You (Inside Out Trilogy)
Of course, you can imagine I was really excited to get to this book considering the “Fifty Shades” was hinted at in regards to the genre, and mood of this book. This one’s a totally different story, but yep I can definitely see it in some ways. The misunderstood millionaire (and emotionally damaged) hero, and the “normal” girl possibly getting in over her head. Not *quite* to that intensity and emotion, at least not yet since Fifty Shades, to me, was an emotionally deep and addicting love story right from the start.

“…enjoyed it very much – 4 stars, didn’t make me squee, but I don’t think it was supposed to

. There’s so much more coming…”

You’ll see what I mean, with this story. This one has the potential to get there (there are still two more books to come), but while reading this book, I found myself more often on the outside looking in. Because of the course of events and the eerie storyline, I felt a number of things, but never one thing in delightful excess (other than constant trepidation). My friend Sandra and I were discussing this very thing:

Sandra: “If I Were You” is blowing my mind right now. Ugh you can’t trust any of the characters in this book!

Sandra: I know but something is telling me not to trust *spoiler* …and then what about *spoiler*? … So much suspense..

Yep… I was constantly looking over the heroine’s shoulder, so I never really… let go, ya know? 😉 Lots of worry (always wondering who could be the bad guy). Excited at times, nervous, and yes, one of the “potential heroes” absolutely had my full attention, but while the reader was allowed to indulge in a few intense and certainly steamy romantic interludes, we weren’t drowning in it, emotionally. And I like to do that. I hesitated using the word “drowning” because it gives off a negative feel, but when a story is good, and the writing captures me, drowning in it, is exactly what I want to do.

Well, thinking back on it, a couple of times, I was almost *there*. A few scenes that had me slightly stunned and completely emotionally involved (generally the parts where the hero took a 180 – and he does, in both good, and bad, directions), and this is why I think this has the potential to really hook it’s claws into me.

Unpredictable. Exciting. I barely remember where it all went wrong. How it took such a dark turn.

Sara begins to suspect something has happened to her (“Rebecca”) for her to have abandoned her life in a storage unit and essentially gone missing. Could it be foul play, or is she living the life of her dreams somewhere?

I have to invade her privacy and dig through her things to find a way to contact her, a way to return what was left of her life. If she’s alive, I think grimly to myself.

When she begins to privately investigate matters, she finds herself at this woman’s work (a prestigious museum), poses as a friend looking for her, is told she is on an extended vacation, and in turn is temporarily offered her position at that same museum (it goes down much better than that! LOL! But you get the gist – Sara is an art major and an enthusiast and knows her stuff!)

The boss “Mark” rich, debonair/sexy, arrogant and obviously domineering, has her raising an eyebrow.

He is, without a doubt, classically handsome by anyone’s standards, but there is something raw and sexual about this man, something almost predatory about him.

And then she meets “Chris”. A famous yet extremely private artist. Wealthy, yes, but so down to earth. So different from Michael.

“You shouldn’t walk away from something that intrigues you.”

As she gets to know these men, and finds herself entrenched in Rebecca’s world, she questions… everything. With good reason (but I’ll let you discover those reasons for yourself). Some intriguing twists and revelations come to light. Oh and don’t forget the steam. Plenty here to keep you entertained and to keep you guessing. 😉

And —> I’m feeling a lot of those “MINE” vibes when it comes to these two alphas… but what exactly are they claiming?

He has warned me away from Mark, from the gallery, from him and he has failed. I cannot turn away. I am here and I am going nowhere. 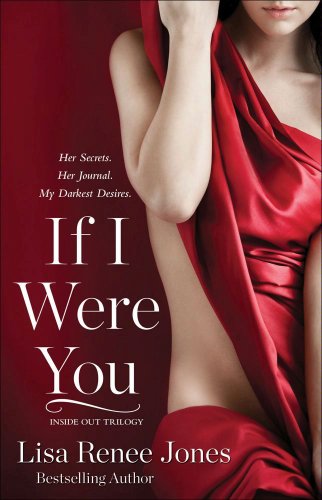 Great review. I see your point about the lack of trust. But I still slurped this up in one sitting. I think if at least 2 books were out already we would have gotten that ‘more’ feeling you need. I still loved this one though. It had everything!

YES!! I wholeheartedly agree. Two books and I’m sure I would have been tearing my hair out!

I agree with Ana, I think the next book will help with the more. I read this in one sitting, and like you Maryse got to almost there. I want to also be drowning in the story and I was really on the cusp. I am so worried about Sara, and I actually found that a bit of a distraction. Everyone is a suspect! I read the last page and kicked myself for reading this book with the second installment not in sight. It was really good, and I am anxious for the next one.

Yes i agree, read it and was totally into Chris Merit. Can’t wait for the second book to get to the bottom of what ever happened to Rebecca and who truly was her dark and mystery man. The ending of this book left me on the edge with suspense.

Do you know the release of the other two books?

I loved this book !!!! I am dying to know when the next one will be out

This book left me with so many questions. I honestly hated the way it ended. I dont mind a cliffhanger into the next book but i felt like the author just picked a page and ended book 1. Other than that I really enjoyed the read. I completely agree and I dont trust ANY of the characters. I questioned who was honest with every conversation. Looking forward to seeing how things turn out. Just wish i knew when that might be 😉

Oh wow was on the edge of my seat the whole time I was reading it…..so was not seeing how it ended and now to have to just wait wait wait for the next book…..I need answers…..lol

uuuuggg I didn’t realize that the other 2 books weren’t out yet of I would never have read this one right now. I was just getting really into it, wanting to see where it was going. The characters seem more real to me then 50 Shades of Grey. Any idea when the next book is due out.

Loved the story and suspense. Just ended too ubruptly. Looking forward to next book for answers.

I loved this book. So I did some research on her website and was surprised to find this will really be a middle book of a much bigger series! She will be releasing a book each month in 2013 and the first couple will be from the ‘lost journals’ then the original trilogy and then even a book from his perspective.

It’s a great series! Keep reading it, you are going to love it. Yes, Lauren it is part of a much bigger series. Lisa wrote the journals to give us an idea and more understanding to what Sara was reading and it has a lot to do with what’s coming up in the next books. When Lisa first published If I Were You, she self-published, then S&S came along and offered her a contract, so now we play the waiting game on the publisher to work everything out. And now a Starz contract has been thrown in…yep that’s right, Inside Out (series for If I Were You) will be made into a TV series, they will start filming, fingers crossed, later this year, the start of next year to air on Starz. So that played in role in the delay of publication as well. Hope you guys enjoy this series…I love it!!

Loved all the books! At first I suspected Everyman that walked in the gallery! I didn’t know who was the BAD guy and the twist at the end really threw me! I do not know if I like Mark, do not trust him but he does deserve his more since he LOST his more with Rebecca!!! Stupid man did not see what was right in front of him! A friend turned me on to the series and I did it right ! Read the journal book first, than read the first two books than went back and read the last of the journal book than read Reavling Us!! Saw on itunes there are more books and oh yes I will get them! even heard Starzs the movie channel is going to do a tv series on the books!! yea!!!!

Yet another great series.. I have truly enjoyed and utilized the list provided. There are some I had already read/listened too and actually have more that aren’t listed.. Just need to find a place to post them to Maryse so you all can benefit from them.. Happy reading ladies

I already read the entire series “Inside Out” fantastic series, their is going to new books, one more with Sarah and Chris and another with Mark Compton. I hope the second one of Mark Compton makes him a better man because right now he is a cad! Someone you do not want to get involed with.