In the Blood (The Maker’s Song Book 2)
Upon concluding this book, I felt slightly melancholy, knowing that it would be at least a year before I could continue this gripping story. There are so many separate stories that all combine and revolve around one sole, yet very important Vampire.

The second installment of the series continues with a more in-depth look into Dante’s horrible childhood, his fragile spirit, and his own personal angst. As a born vampire, his childhood consisted of living in an FBI controlled experiment that psychologically induced “kidnapped” children into becoming psychopaths and serial killers (at the hands of a rogue FBI division, headed by a Vampire and evil psychiatrist) via the means of torture, beatings, taking the toys and killing the loved ones that these particular children loved.

Dante as an adult has no true memories of his past (only horrifying fragmented images). Although his memory was blocked by the agency when he was released into society, certain memories, or keywords and names can cause him excruciating headaches, nosebleeds and seizures, and those that love and protect him are anguished by his frequent torment.

Despite being an incensed and anguished artist, the stunningly beautiful Dante practically exudes an angelic radiance that we come to realize, is due to his being “half angel” (his father is one of the “Fallen”).

Here is an excerpt from the book, when “Lucien” is being held captive in the Heaven’s (in an attempt to protect and hide Dante) and speaking with another Fallen angel who has suddenly heard Dante’s “song” (when Dante unwittingly uses his angelic powers, on earth, his essence radiates from him like a song to the Heavens)

“His name is Dante, a born vampire,” Lucien said. “He’s twenty-three years old, and he doesn’t understand what he is.”

Lilith’s eyes widened. “He’s just a child! How could you leave him alone?” She frowned. “Did you say born vampire? Fola Fior? But how can he be a Maker?”

We come to realize that he is a “maker” (or creawdwr), and a destroyer, and this becomes the most confusing part (at least for me) of the book. It explores the story of the Heavens, God, Angels, and the Fallen, and a whole storyline that I had a hard time completely following. Perhaps due to my Catholic upbringing, I found myself cringing somewhat at where the tale ventured, as I think, in this rendition, God (Yahweh) died, and the angels (including Gabriel and the other Fallen) are looking for a new leader/creator. Essentially, I am assuming, they need a new God, and the song of a creator on earth (Dante) is being heard from the Heavens. Lucien (Dante’s father and Fallen Angel who was once close to Yahweh) is trying to keep the angels from finding him. From what I gathered, if they discover him, they will “bind” him (I am assuming bind him to the Heaven’s) and use (and essentially) overwhelm him as their leader.

Guard him from the Fallen, llygad. They will use him without mercy.

As a whole, I love the rest of the story. However, I have a hard time allowing myself to surrender to a theoretical (even if fictitious) version of Heaven, so I think my mind was subconsciously blocking parts of this segment of the tale.

All cringing aside, the story does have an “earthly” aspect to it also, and we have enemies of all sorts (the rogue FBI division has decided to terminate EVERYONE involved in the experiments, and anyone who was involved in the serial killer investigation from the last book). Danger, is at every turn, enemies appear in many disguises, and whether human, or paranormal, or even angel (some are power-hungry), Dante and loved ones are threatened.

The romance manifests itself more prominently in book two, and while again is not the core of the story, it is an important part. Don’t forget, in Dante’s past, he has lost everything he has ever loved. While he loves wholly, he fears for those that he loves.

Why you denying your heart?

He met his reflection’s dark-eyed and dilated gaze. “Can’t trust it.”

Heather, despite having her own issues to deal with (the threat of “termination” by the FBI if she doesn’t submit to their plans for her), also devotes herself, in this installment, to protecting Dante’s “innocence”. Despite his revolting memories of himself, she sees past his fears, and works to help him fight his real enemies, and his own personal demons.

Without a word, he grasped her hand and interlaced his fingers with hers, their palms pushing together-a balance, a promise. 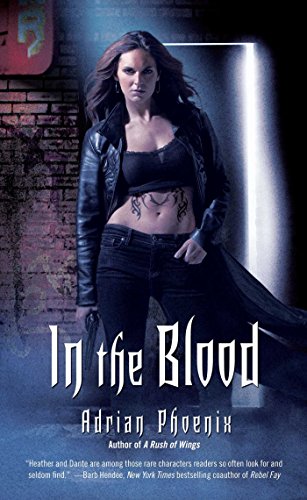