In the Stillness
I received a review copy of this book, and since I’ve heard good things about this author’s previous work, I intended to give this one an eventual “go”. But after receiving two glowing recommendations by authors who’s books I’ve loved, and who’s opinion I respect, it immediately went from TBR soon, to “to be read now“.

Maggi: I just want to say that I have not read anything this brilliant in a long time. This book is life changing.

There was an honest urgency in their encouragement, and let me tell you… after having experienced this book myself, I can say there was no bias in their obvious love for the book.

You know what? I LOVED it, too, you guys. It incited me to break out into spontaneous “book-club-chatter” while I ranted and raved with them once I was done. Here’s a sample, although it’s missing parts that I deemed *spoilerish*. We analyzed everything! But mostly just our feelings below, to give you an idea:

Maryse: Great recommendation – tears in my eyes, throughout.

Charles: yes, me too. I love the books that get me on a gut level. And this one did.

Maggi: I had the same reaction when I read it, Maryse. It gutted me, I was blown away.

Maryse: Yep. You guys were right. … and I absolutely believed it. … I “get” it… that disconnect and then the inevitable breakdown. … So many sweet scenes amidst a couple of broken souls. And it hurt me for her husband and her children (and especially for her) that she was so pained in her life, so lost and so desperate… and alone. And so destructive. … I was equally mad at her, and made at him. Craziness.

Maryse:  I literally noted… “Wow I feel her pain. I feel like she’s selfish and negative and maybe unlikeable… that it’s not so bad and many have it way worse… and yet, I feel her pain.” I felt bad for calling someone who was hurting so deeply yet emotionally detached, selfish, but since I also felt her pain, I think it’s okay. 😉

Maggi: exactly!! There were so many things that I was mad at Natalie for, but I could relate to if I let myself go there. It was unsettling and uncomfortable in it’s honesty.

Amazing and so different from the majority of what I normally choose to read. Totally up our alley, mind you… just a different kind of angst and intensity. Romance and heartbreak, and personal pain, and coping mechanisms, but… on a different level.

Some of the darker moments are perfectly “in your face”. Her personal thought processes sometimes border on hateful, and yet, there’s a humanity to her, that kept me connected to her. Despite the fact that she should “know better”, despite social norms, despite what we should do and think now that we’re adults, despite our responsibilities… I couldn’t hate her.

But he just thinks I’m crazy or stressed when I say it. I am. And it’s because of him.

It’s often painful, at times shameful, and certainly angsty in it’s own way, and at the same time, subtle. Dramatic, but not so melodramatic. Everything she did, she thought, she acted upon, she hid… and the circumstances of her life… I believed as if she were real, and as if these people could have been my neighbors, that I know, but that I never really knew at all.

Natalie has, what seems to be a great “normal” life. From a well-to-do family, married to her college sweetheart, mother of twin boys (just about to start kindergarten). Currently a stay-at-home mom with intention to go back to school and finish her PhD, as soon as her husband finishes his (which will be very very soon!). Two highly ambitious intelligent adults, with the world at their feet.

Except… in Nat’s head, there are no rose-colored glasses. There is a desperation for something else. Anything else. But especially the dreams of her past. This was not supposed to be her life. And she specifically can’t forget the one part of her past that continues to haunt her today. And my heart ached for that, with her.

He says things like this when he feels bad that my entire identity has morphed into something he knows damn well I never wanted. He’s assuring me that I’m doing it well – this thing I hate doing.

And the only way she can sanely relieve the pressure is by secretly cutting herself. If not for that, who knows how she’d cope.

Eric knows. And that’s why he’s squeezing me so tightly; he doesn’t want me to go back down the path that’s already in my sights. The one where I alone control how I feel. At all times.

That’s what you’re in for. At times I understood her completely. At times I found her to be incredibly self-centered. And the craziest part? I often felt that way, simultaneously. My mind “knew” what was logical, acceptable, and proper. My emotions, however, ran away with her.

I attached myself wholeheartedly to her emotional detachment. Detachment from those she was expected to love the most. Resentment of her current reality while she (and we) often take a detour in her head, re-living her lost past, and her missed opportunities. Coulda, shoulda, woulda is the theme here. It’s uncomfortable. Uncomfortably human. The type of thing where you can stop and say (in some way, shape or form)… I’ve thought that before. I’ve felt that way before. I’ve hoped that before. I’ve resented that before. I’ve said that, before.

But it’s not just her pain. It’s EVERY character’s pain, in this one. All of their mistakes, the love, the realizations, and how they adapted, and continue to adapt to life. Every character contributes to the story (from their past, to their present).

Eric knows I resentfully put my aspirations on hold so he could fulfill his. And, still, he tries to hug my pain away.

And all of it is as important to this book, as her own somewhat… self-centeredness (and I try to say this without trying to make her out to sound bad… there are some good reasons for her frame of mind). And yet at the same time, I was thinking, suck it up. LIVE!! LOVE!!! (P.S. despite the “dark” mood, there is an amazing love story to fall in love with, too.)

Yet it’s not that simple, sometimes, you know? What’s fair, not fair, what’s right and what’s inevitable… that’s life.

But what I loved most about this book? Along with my unavoidable connection to the heroine’s anger, I was afforded an undeniable growth, in turn, allowing myself to accept how deep I was “in there”, with her.

Gorgeous writing. Eloquent, but in a raw, realistic way. A delicate subject matter, distressing thoughts, and yet, a wondrous growth that the reader experiences every step of the way, with the characters.

Almost 5 stars for me. It was pretty much unputtdownable, but I need a little something more towards the end. While this is a complete book (no cliffhanger), I feel there is much more to explore and well… that’s it. A tad quick, or abrupt in the end, considering everything we experienced and everything we still need to experience. I don’t want to tell you how it ends. The way the story is told, it could go any way, and at times I had no idea what outcome awaited us. A sad one? A happy one? A balanced one? A realistic one, that I can tell you. *fingers crossed that there will be more*

So thank you Maggi & Charles. Obviously, you guys know what I like, and this was it. 😀 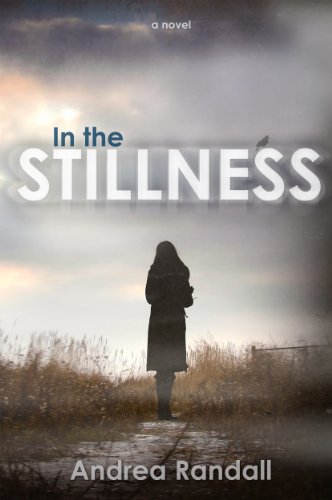 Your review was spot on. It was a beautifully written story of pain, resentment and not knowing how to deal with either. I cried very fat tears while reading this book. I get her. Ultimately, I admire her for getting her life together. For building a new life from the rubble of her past. I just wished for a better glimpse of that new life.

🙂 Right from the start I was already teary-eyed… just so perfectly expressed, I couldn’t help but become one with it.

Ok so now I really need to read this book! I’m reading Find You in the Dark at the moment so I’ll finish that series off first though! 😀

I have been “friends” with Andrea since Ten Days of Perfect and have loved to watch her talent grow along the way. When I first heard about this book, I knew that there was something amazing to be shared with us all. I am so proud to say that I knew her from her start. I am in the middle of this book and I can relate to everything that you have said above. I wish Andrea all the best!

I finished this book yesterday and your review is perfect. You feel everything she is going through from the beginning and a lot of people could relate to her life. The ending though could have been so much better…

Just finished today..I couldn’t get into it @ first but I kept reading and I’m glad I did. Had a few ugly cry moments. It was different than what’s been out lately and I loved that. I agree with you that I would like too see more of Natalie’s future.

Reminding me of, Wait For Me by Elisabeth Naughton but with the arc of a Molly McAdams. Beautifully real and honest. Loved it.

Thank you for the recommendation and review. At first I couldn’t get into it but I pushed through and LOVED IT!!!! It was hard being a mom and reading some of her feelings in the beginning but once you get her history it makes sense. And you start to feel her pain. I also loved Ryker’s story! He is a true solider and man!!! Best ending ever!!!

I was hooked from the start because of her outrageous thought (but I’m hearing, sometimes not that far off from what a mom can think at times)…

Like… just reaction about the yogurt on her sons back. LOL!! It was just so real. GREAT writing!!!!

I just finished and this was a good one! I totally agree with you on how it ends, it did seem a bit rushed but overall good book. I was captivated from the first paragraph