Incandescent: Knights Rebels MC
Looking for that Kristen Ashley biker alpha-male feel? This just might do the trick! Super-sexy MC book with all the growly-guys, claiming, and bossing around (er… sweetly-ish or, at least as sweet as a biker-boss can be), to satisfy you alpha-sweet tooth. 😉

Shell found it a few days ago while we were perusing bargain book finds,

Shell: ‘Incandescent’ by River Savage it has really high ratings and the Alpha hero is the Club President. He’s described as “crass, obnoxious and dangerously sexy”… and he’s also single dad to his son.

Kathy: I read Incandescent: Knights Rebel MC yesterday and you will enjoy it. I can’t wait for Holly’s story.

and… at that price? With those reviews, and THAT synopsis?

Kadence Turner has no business lusting over a student’s father, especially the president of the Knights Rebels MC. Nix is crass, obnoxious and dangerously sexy and for some reason, Kadence can’t seem to hate him for it. The bossy biker breaks down her defenses, but unlike the old Kadence, the woman she is today won’t give in without a fight.

…watching him talk with his son makes him vulnerable. I have no right thinking of him like that. That man is off limits, not to mention a walking smarts, but standing there at a distance, I can see how much he loves his son. That affection in his eyes leaves me with a sense of longing. I want that.

I WAS SOLD! It immediately jumped up to the top of my TBR list. I was totally in the mood for an arrogant-alpha read.

“You can’t just call me baby, boss me around and demand me to get on your bike.”

“Yes I can,” I say, walking up to her. I take the helmet out of her hands and plant it on her head.

And it was fairly gentle in it’s “bad-ass” delivery. All bad-asses, sure, but it was a fairly “clean” MC club (cleaned up over time during the takeover from his father’s days), but of course, dealing with opposing clubs and dangerous bad guys that are up to no good. Definitely had that KA feel, what with the sweet bad-asses, the sweet child, the troubled ex-wife, and the heroine overcoming her own dark past and hiding scars, inside and out.

I keep my distance. Associating with them is something I’ve never done, even if they have cleaned up their act. After what happened with Zane, my a$$hole ex, I avoid people like them. I know all too well what they’re capable of, the reminder branded in my skin.

Was it KA-awesome? Well… to me? It was plenty good (good writing!), but it all went a little fast overall. Especially in the attraction/claiming department. I would have enjoyed much more push and pull, romantic tension, pining and unrequited love, or maybe even and OH NO HE DIDN’T moment to freak me out. And while the romance was there – with moments of sweet intensity (and so was the steam), plus a few scary moments, I wasn’t as riveted as I’ve been with KA’s angsty love stories. I would have loved much more of her life as a teacher and that dynamic (teacher falling for a student’s father, PLUS the fact that he’s the president of an MC).

Also, I think had the entire story been from the heroine’s POV only, I might have experienced more tension, more anxiety and more butterflies. And I would have gotten to know her better. Become “her” more. But I know many love the dual POV books (his and hers) so this one might be perfect for many.

Still though… if you’ve already read all of Kristen Ashley’s alpha-males, and are craving her style and her emotionally raw but “not-too-gritty” feel, I recommend giving this one a go! Plus, it sets us up wonderfully for the next book to come (another biker in the crew). 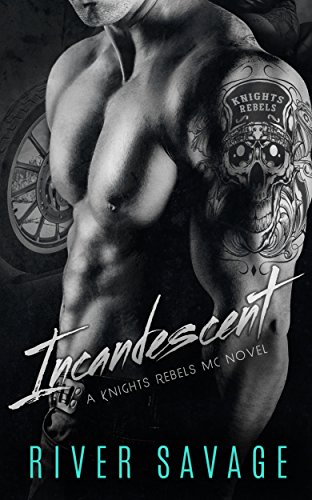 The Nordic Lords MC club series reminded me a lot of KA’s style…. I read them back-to-back, I liked them that much, if you’re in the mood for hot guys in MC clubs.

I also loved the Lights of Peril series. That one was less MC club cliches and more people-interactions… emotional and stuck with me.

This one (Incandescent) I read in August, didn’t continue in series…. so I agree with the 3.75 stars review. But if you are in the MC mood, consider those two other series!!

Omg yessss i have to read the Lights of Peril series sooooo badly.

I just read it too….I enjoyed it. Reminded me a lot of KA. Tho not as good. I agree with your review

I agree with your review! Not KA material but cute weekend read. 3 star book….5 star cover!

I just read a book (Precarius by Bella Jewel) that gave me this same KA feel that I was looking for Maryse. It’s not as good as KA, but… Plus there are enough of push and pull, romantic, pining and unrequited love and even some “oh no he didn’t” moments just like you said. But it’s a short story (just 192 pages) but this book gave me just what I wanted.