Kiss of Crimson: A Midnight Breed Novel (The Midnight Breed Series Book 2)
I’m really loving this series. It was a great choice following my Dark-Hunter marathon. I feel like I’m smack-dab in the middle of the Black Dagger Brotherhood world, again. While the stories, characters and situations are different, the “feel” of this series is similar (and very well written). From the Warriors, the villains, the vampire society and politics, and of course, the passionate encounters, if you are looking to read a series like BDB, this is it!

Book two is essentially Dante’s book, but he shares it with a new character (“Chase”), and I enjoyed their two stories unfolding at the same time.

Dante is severely injured in the beginning of the book (hunting Rogue vampires). He crawls to a nearby veterinarian clinic (late after hours), but realizes that the veterinarian (Tess Culver) is still there. While she is startled by his intrusion, she quickly realizes that he is bleeding severely and tries to help him. Dante, unable to heal without blood, (and knowing there is only one way for him to recover) bites her.

“Shhh…” Warm air skated across her neck as he spoke in a low, pained rasp. “I won’t…not going  to…hurt you. I promise…”

She almost believed them.

Until that split second of terror, when he parted his lips and sank his teeth deep into her flesh.

While she lays still enthralled from his “gentle” attack, he notices the “Breedmate” mark on her hand, and realizes he has just bonded her to him.

She was a Breedmate.

And with her blood now pulsing within him, Dante had just completed one half of a solemn bond.

By vampire law, she was his.

The very last thing he wanted or needed.

After trying to explain his situation and the fact that she was now his  (yeah like that was going to go over well), he realizes, in her panic, that she has somehow contacted the police, and he needs to hightail it out of there. Deciding to approach her at a later time, he quickly erases her memory of him.

Meanwhile…back at the Batcave, (teehee!)…

Attempting to uncover the reason for the recent vampire disappearances (all young males from the vampire society – the Darkhavens), Dante is paired up with Agent Sterling Chase (a Darkhaven law enforcement agent). While their personalities clash at first, they eventually come to respect each other. Realizing that the young males are taking a new street drug called “Crimson”, they uncover that these vampires are turning Rogue from the drug. Chase has personally involved himself in this case, as his nephew is one of the males that have mysteriously disappeared. Deeply in love with his dead brother’s widow (she is a Breedmate that refuses to bond with any other male), he promises to bring her son home.

This story leads us though Dante’s and Tess’s relationship (from his jealous realization that she might be involved with another man, to his provocative, insistent and downright steamy pursuit of her – woooo there are some very steamy moments)…

“You’re mine, Tess” Dante moved over her, kissing a path from her lips to her chin, then along her throat, to the soft skin below her ear. She smelled so good. Felt so good against him.

Dante groaned, his nostrils picking up the sweet perfume of her arousal. Lust made his gums ache with the stretching of his fangs. He could feel the sharp points coming down, throbbing with the steady beat of his pulse. “You are mine. And you know that, don’t you?”

Although her voice was small, little more than a breath of air rushing out of her lungs, Dante heard her plainly, and the word went through him like fire.

…their discovery of each other as people, their sweet, almost normal interactions and her eventual realization of exactly who she was falling in love with.

Their bittersweet story entwines with Chase’s desperate heartache for the love of a woman who may never see him as anything more than a brother.

He loved her now as always.

It shamed him, how much she affected him. Just thinking of her, his skin felt tight and warm. She made him burn inside, and she could never know the truth of that. She would despise him for it, he was sure.

From the mystery of the drugs, the Rogues, Tess’s special gifts and haunting past, and Dante’s horrifying visions, you will be thoroughly entertained! Your nerves will be on edge as the tale spirals into an exciting ending that will have you reaching for the next book in the series!

Oh and let me tell you…Book three (my review coming next) rocked my world! I thought it wouldn’t, for a few reasons, specifically, because I always love the moment when the clueless human realizes she is in love with a vampire (that scene never gets old). In book #3, the heroine is a Breedmate that was brought up in the Vampire society (so I was already frowning at the potential lack of excitement)…and really, Book# 1 was so good that I still re-live it in my memories, so how could any book live up to that one? But book# 3 proved me wrong, and addicted me to this series like a Rogue on Crimson! <—–see what I did there?! Haha I’m so clever I amaze myself sometimes…  😉 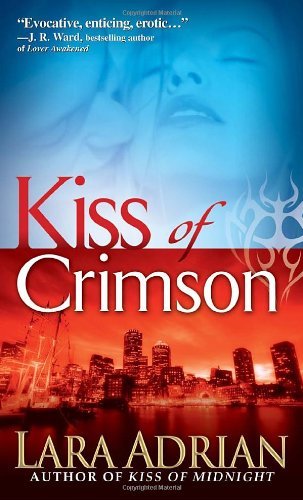 You amaze me too…..hahaha
I am going to get this one with my awesome Christmas gift!

Oh I love Tess & Dante! I read this book last week and it was delicious! Although, their story was great my favorite is book 3. I can’t wait to hear your thoughts on it as well!

Well, another extra ordinary book indeed. I never thought that it will be a concept that vampires will turn rogue because of a drug. Again, usually they are immortals and like in twilight saga that medicines don’t usually has effects on them. But since they are living vampires I do get it. It was a great point for me that there are two stories unfolding in the book as Dante and Chase excites as with every page. It is nice that they have different experiences with love. One was accidently hooked up with love and the other loves in silence.