Let it be Me
I’ve had this one on my TBR list since it’s release a few months ago. In a way, I was dying to read it, but I just needed to be prepared. I kept re-positioning it to the top of my list, but skipping over it when it came time to choose, ’cause I knew… this one wouldn’t be an easy read, and I was never really ready for it. Considering the subject matter, I had a feeling this would get ugly, and boy did it ever.

While I tend to gravitate to these kinds of reads (or watch movies that deal with spousal abuse), I cringe and wonder why I do “this” to myself. But I realize, what I love about these “darker” reads, is that sometimes, we can truly hate the bad guy from start to finish, our minds are not muddled with “love” for him. Plus, hopefully… eventually, the heroine’s survival instincts kick in, her mind overrides the mental abuse and brainwashing, and she’s practically reborn in the end. She finds herself again, and is stronger for it.

And while I really struggle through the whole process of that muddled thinking (all the self-doubt), the innate constant fear (with good reason), stepping on eggshells and no matter what, NEVER getting it “right” (ugh! When it comes to HIS demands), there is something to be said for reading about a character that somehow manages to find herself, take herself back as she climbs out of her own personal hell and permanently sever her relationship to the devil incarnate. And best of all… LIVE again.

That’s why I read these. That’s why I’m attracted to a story about a women in hell, that finally fights it, and survives it.

And this is what this story is about.

Violet married the “love of her life” at the age of twenty and while at first his handsome, charming ways and intensity wooed her, he quickly proved to be the devil in disguise. And I mean it. This guy pretty much makes the worst of the worst list in my book. His mental and violent physical abuse was constant. He is an absolute monster, and like her, I kept wondering… if he hates her THIS much, why does he even bother?

He is stronger, much stronger, and Lord knows I’m scared of him. Like now, he lets loose a string of obscenities about how I’m the world’s biggest piece of sh!t when, not two years ago, I was his world.

But alas, I do not understand anything in regards to the mind of an abuser. It makes no sense to me other than monsters are just that. They’re monsters. They can’t relate to love and protection and sharing, they can’t be reasoned with, they have no sense of logic, and they are just plain… psycho. That’s the only thing I can “try” to comprehend with this kind of person.

Is it love? Hell, I sure don’t think so because his voice makes my skin crawl. Even with his dark hair and even darker eyes, his olive skin, and the thick scruff that used to turn me on, I can’t stand the sight of him. I hate him. Am I scared to leave? Yes. Do I feel like I’ll never find someone to love me? Definitely.

And while some abusers (in our books and probably in real life) act lovingly and seem to care in times when they are not on a rampage, Rob is NEVER a nice guy. N-E-V-E-R. Even in public (amongst her entourage, that is). He’s just abhorrent.

But luckily she has ONE reprieve. He works nights while she works days (and she had to practically beg to be allowed to work, so that should tell you something). They barely cross paths, but when they do, it’s never nice (even if it’s just verbal). He’s such a… UGH. I was all… “Someone just… please!! Do something about him!!!”

But at work, she has a different “life”. A certain amount of relaxation, where she can smile again, and chat and laugh freely. She finally makes her own friends that give her a sense of worth and respect. And she learns that love might just be like she once dreamed of when her new boss befriends her and they begin to bond. And while she tries to hide her reality from all, he recognizes the signs of abuse, even if she won’t let him in.

But that’s where I struggled the most, wishing that someone would just… I dunno. Force her to not go home again (I mean come on!!!! HELP HER. Don’t let her go back!!!). Force her to fly back to her mother’s house in a completely different state. Take her and hide her. ANYTHING!!!! But she wouldn’t go for help, she would barely even ask for it, and even though she had plenty of opportunities to escape (or to just… not go home again), she… didn’t. And I freaked out each and every time.

Why the hell do I stay? Why do I take this and why do I allow this to happen?

I’ve asked myself those same questions for the last seven hundred and thirty days, but for some reason I still stay.

But you know… they say this kind of mentality happens a lot in abused spouses and while I could see ALL SORTS of opportunities for escape, for some reason… she could not.

At least, not yet.

… my story isn’t a happy one, well no, I take that back. It can be happy, I can be happy; I just have to get there. I have to fight for it.

And I’ll let you find out the rest.

Sure, at times I found it to be somewhat repetitive and drawn out, as she would mentally go over and re-go over the same excuses she felt the need to convince herself of. Re-hash it all. But then again, that might just be my need for her to GET OUT NOW!!! And fair warning, the abuse scenes are extremely graphic (I really struggled with these. And there are many). And maybe some other “stuff” felt a bit quick to me.

But overall the message was clear, and my hope was tremendous. This was a bit of a “love story” but mostly this is a potential survivor’s story. Very good read that kept me turning the pages, and had me on the edge of my seat, and gritting my teeth.

I’m not quite sure where I’m at, star-wise. While some scenes (in regards to repetition) and dialog had me more at a 3.5 star level, it’s definitely at least a 4-star for me in terms of holding my attention and having me mentally and physically reacting, so I’m thinking of going with that. 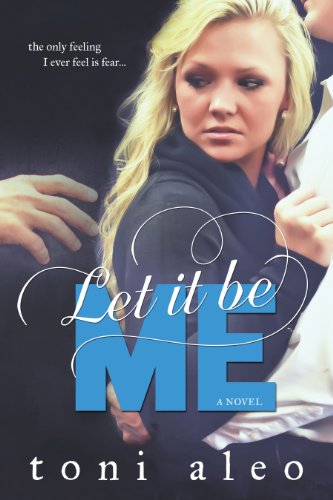 I really liked this book, books that have abuse in them are hard to read but it happens all the time. I get sucked in just for the revenge. I loved the epilogue.