X
You are here: Home / My Book Reviews / Book Review – Live For This by Kathryn R. Biel

Live For This
Definitely a great fit for the “What to Read After Me Before You” list!! Thanks to those of you that recommended this.

I was in the mood for a sweet friendship/potential love story between someone coping with a disability and someone taking life for granted and this one certainly had all of that!

Jeanie: Loved Live For This

Ann-Theres: i recently read Live For This, by Kathryn R.Biel!! The plot is kind of the same, but has a good twist also…

Tracey: Live For This which was a rather couldn’t and wouldn’t put it down 4 star (It even came along to do the school run with me).

Maryse: I’ve switched my current read to “Live for This” and I love the writing style so far.

It’s not perfect but it’s good and it’s keeping my attention.

I say “not perfect” because there were little character hitches along the way, that I felt were there to “create” drama and angst, but that could have easily been avoided in real life. The story was tamed down, with touches of angst (mostly due to miscommunication, or should I say LACK of communication),

And while at first (to my delight), it did have that raw-and-gritty-feel,

It doesn’t bother me that they don’t like me. Which is so funny, considering how desperately I tried to fit in back home. How much I wanted to belong. To be popular.

…the story as a whole, was “safe” considering the realistic nature of the drama in both of the main character’s lives (his physical limits, difficult circumstances and personal betrayals).

…she destroyed me at the lowest time in my life. I mean, who dumps a guy six months after he’s paralyzed? Actually, I think most people. I’ve talked to a few others in rehab whose girls and wives left them high and dry. She at least hung around for the first six months. That was the toughest period. I wish she could have stuck it out until things improved.

It was ugly. It was hard. I think the life-or-death thing wasn’t bad. There was just a day or two of “Is he going to live?” It’s what came next that she couldn’t deal with. The helplessness. The messy things— catheters and bowel programs. Learning to dress myself. And then the sex thing. That’s a whole other issue.

And hers (which was devastating in it’s own right).

Life is short; this I know. I need to make every moment count. You’re not guaranteed a tomorrow; I want to have lived life to the fullest.

It never occurs to me that it’s my own behavior that could keep tomorrow from coming.

Michael (the hot popular guy that had it all, and ended up in a wheelchair) was as grounded, upbeat, and centered as they come, throughout this story. He actually reminded me of the main character from Bright Side (Bright Side herself!) with her positivity despite the debilitating or tragic circumstances in which they found themselves. While of course, Michael could be moody at times, he was a whole heart… a pure soul and IS a bright, beautiful light, despite the seemingly unfair circumstances that had befallen him.

She doesn’t know how far I’ve come. Not just physically. I’m a better person for having less of my body work. Kinda mind boggling if you ask me. But true.

It’s the “main” character in this story that has the “real” struggle. Samirah, the NY party girl with plenty of rich-girl trinkets, including the super-wealthy boyfriend, that just happened to be married.

We don’t pay for much— anything, really. We’re showered with gifts and luxuries and given privileges we’d never earn on our own. And in return, we do as we’re told. We make our men look good. We’re happy with whatever they give us. We never want more.

I don’t want more from Chase. I just don’t want to share him. That’s what I try to tell myself.

I want him to belong to me, the way I belong to him.

No matter. Samirah was mostly concerned with her current and future gains. She and her entourage were self-centered jerks, and had no qualms living up to their bad reputations. But Samirah was in a downward spiral, and she knew it, and when she was brutally betrayed by everyone she thought cared about her, she found herself homeless, sick, and completely alone.

I’m not a good person.

This happened because I’m not a good person.

Those phrases repeat over and over in my head. I know they’re the truth. I deserve this.

I deserve to be homeless and alone. They say that when you play with fire, you’re bound to get burned. Well, consider me charred and black.

This is my fault.

That is, until Michael found her, befriended her, and eased his way slowly into her broken soul.

“I’m going to take you, get your prescriptions filled, get some food in your stomach, and then you can stay with me until you figure out your next move.”

I nod in agreement and follow him to his car.

Apparently, I’ve learned nothing. Here I am, trusting in someone again.

In reality, nothing had to be contrived via lack of communication to drive the drama (as it eventually comes to), because both were fighting personal and even physical “demons” of sorts that could have carried the disquietude, naturally, had the characters been allowed to reach their darker moments. In fact, at a few points they did. But they were somewhat glossed over, and quickly resolved.

It’s not that I want the characters to suffer, per se, but considering this deeply personal story, I’d say it was almost a “Lifetime” or “Hallmark movie” version. Hardships were present, yes, but the focus here was that love and friendship conquers all (and maybe a bit easily, per the course of their journey presented in this story). Which I should be delighted about, right? This was (to me) a feel good story!

But for me to wax poetic about the depth… for me to connect on a soul-deep level, I need soul-deep angst before I finally see that light at the end of that darkish tunnel. And while it started OUT that way (the first half had me HOOKED and had that perfect somber, despondent, self-centered feel), the writing changed along the way (of course, as it became lighter when kinships were forged) but as a whole, the second half didn’t feel as if it matched the first half.

That said, if you’re in the mood for a sweet, fulfilling friendship (potential love) story, following two fated strangers that heal and grow together, while finding themselves, then this one’s for you!

And here it is on Amazon UK 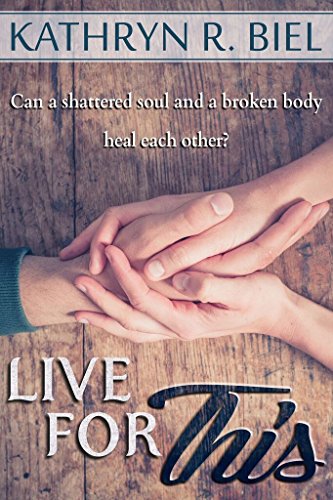