Love, Chloe: a standalone novel
Love, Chloe features Alessandra Torre’s signature, exhilarating writing style, incorporating realistic dialogue, relatable internal monologue and very human needs (and mistakes)! With characters that are easy to visualize, they come to life in every one of her books that I’ve devoured (yes… devoured!) and read as if watching a movie (or a favorite TV series) and this one was no exception!

That said, this classic contemporary romance release IS somewhat different for this author, as it doesn’t sucker-punch us with a crazy twist, or an intricate plot (or some crazy secret that’s been building with every chapter and mini-reveal). It’s straightforward, easy, and breezy, but still delights us with angst, bad decisions, necessary secrets, and something slightly out of reach (and yet still thrilling) to the majority of us.

An escapism for sure, even with it’s somewhat relatable subject matter, considering the heroine was raised wealthy and privileged. Even if she’s struggling to make it on her own in her “after-college” life (as many of us have), her “name” and entourage still allow her some access to the good-life, despite the fact that she considers her new life a serious downgrade.

I beat on the glass of my old world and desperately wanted back in, each day in my new life more discouraging, the varnish of my prior life rubbing off, a new Chloe emerging.

I didn’t want her—I only wanted the past.

But never fear! There is personal growth. 😉 But not without a few mistakes, first!

Chloe is finding herself starting over, pretty much penniless after she catches her super-rich fiancé with his maid, and discovers that her parents are being prosecuted for all sorts of financial shenanigans (meaning their incredible wealth is… well… frozen. Belonging to the government). Yikes!

And she has just finished her final semester in college and is ready to graduate, but they won’t give Chloe her diploma until she pays up her final tuition. *gasp* Chloe is homeless and has to work.

Despite being dressed to the nines with her designer shoes, clothing and jewels, Chloe realizes that her expensive looks and socialite grooming doesn’t pay the bills. She can’t afford high-end New York living… and can’t really afford low-end either.

Maybe the cultured, confident woman I was before was just a product of my parents’ money. Maybe now, with my new life a train wreck, I would discover the real Chloe Madison. And maybe, I wouldn’t like her.

But her family name still comes in handy, and after a “tip” from her mom, she’s able to get a job as an assistant to a wealthy and famous New York socialite. That said… she’s used to being served and treated as the prima donna she was raised to be. Now she’s the one doing the serving!

And when she finds herself assisting her new socialite boss on the set of a movie, and can finally afford her own apartment, she makes all sorts of friends! From a super-famous heartthrob actor, HIS quirky assistant, and even her “blue-collar” landlord/superintendent (off her radar no matter how hot he is),

The service provider tag shouldn’t have made him less attractive, but it had. I needed a man who had his sh!t together, who could help me figure out what I was doing. Whose next work commitment wasn’t unclogging a toilet, no matter how well he filled out a rented tux.

…she truly begins finding herself.

Especially when she realizes that her two best friends from her socialite days have not abandoned her. I LOVED them!!

And I really expected, in the dark parts of my soul, for them to leave me over this. For our friendship to wither away into nothing, our common ground lost. Instead, they rallied—feeding me, housing me, and distracting me in times of struggle.

They had been better friends than I deserved, our friendship turning a corner, becoming deeper through all this. I hoped, one day, I would be able to return the favor. At the very least, to become a better friend.

NOT A SPOILER BUT IF YOU WANT TO GO INTO THIS BOOK “BLINDER” THAN WHAT I’VE WRITTEN SO FAR, STOP HERE. It’s my personal ANALYSIS time. LOL! 😀

Things really start to take shape when she realizes that earning her own life, for once, begins to hold a ton of worth. When she discovers what she really wants in life, vs. the dreams she thought she had. When she weighs the pros and cons, and the rights and wrongs of the drama of others just to keep up appearances. Her outlook on life starts to change.

That said, for awhile, I couldn’t quite tell where it was going, perhaps, too anxiously anticipating this author’s trademark storytelling “gotchas”. I didn’t know if I was headed for heartbreak, or for the ultimate reconciliation, or for a gasp-worthy love affair, or for some crazy off-the-wall reveal that I didn’t even see coming.

I had a few issues overall. Such as Chloe’s resentment regarding her new job AND boss (even though it paid very well, and was cushy as heck, I was disheartened with her lack of appreciation on that front). That said, yesssssssss there are glaring honor-issues that helped solidify her employment animosity, so I “get it”. 😉

Also the fact that there were (at least at first) four potential love interests that had me juggling all sorts of HEAs. I believe the author was trying to throw us off the “romance” track, keeping us guessing over four potentials; one having broken her heart that she was still in love with…

That was the problem with love. There was no OFF switch.

…one being a Hollywood heartthrob and all of that fun bickering (GAH I LOVED their interactions! Every. Single. One. That a$$ Joey is AWESOME!!! LOL!!!),

“You’re seriously going to make me get my own coffee? I stopped doing that like eight years ago.” He gave me a wounded expression that was so blatantly adorable that I almost laughed. No wonder his ego was so big. He was impossible to hate.

…one “commoner” (that was, appearance-wise, right up her alley, but socially… NOT)

and one seemingly PERFECT man… but belonging to someone else entirely.

I could feel him in the house. When Clarke moved from his study to the living room, a phone to his ear, his laptop settling on the coffee table, his build hunched forward, I watched. When he stepped out on the balcony, his hand running through his hair, the door left open, the breeze brought in his scent.

My new favorite distraction: trying to understand the man.

And yet, despite my mini-hiccups, I enjoyed the love-story potential. From the lighthearted and fun feel (although, to me not as funny, clever, or heartwarming as Hollywood Dirt), to the super-steamy moments, and especially how everything comes together in the end. ‘Cause even if this was an “easier” Alessandra Torre read, it still had a few tricks up its sleeve! 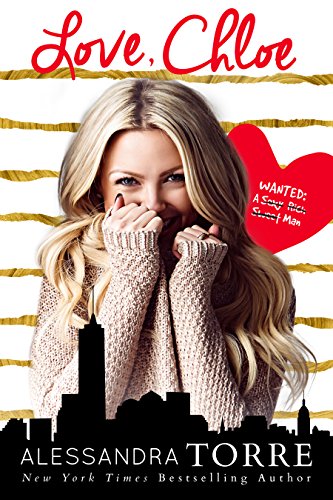 Sneaky Maryse! Didn’t know you were reading an advanced copy and holding out on us! Alessandra Torre is an automatic 1-click for me! Looking forward to this one!

*snort* You got me! It’s rare I pre-read a book (I like to read with you guys) but sometimes, I get one early and it’s just tooooooo hard to resist.

You know me ‘n Alessandra Torre stories. I can’t help myself. 😛

Ela left us hanging… 😉 Bet she’s putting on makeup as we speak!

Love Alessandra Torre!! And since you liked it an instant buy for me 😀

You got me Maryse! Lol but sadly it’s usually only for special occasions and holidays…..so hardly ever! But I sure have enough stock!

Can’t wait to read this!