Onyx: A Lux Novel
An excellent follow up to a book that already had me *squeeing* with delight, back in January! I gave Obsidian (book #1) 5 stars, and Onyx gets that too!! It may be a YA series, but the energy, excitement and emotion are felt intensely no matter what your age.

Remember how amazingly addictive Vampire Academy was? (P.S. —> if you haven’t read it, you MUST!!) To me, I considered that YA for adults ;). This one is like that. Oh sure, the overall story isn’t remotely similar (there are no vampires in this series) but the feel of it is. They may be only 18 (or 17/18) but they’ve had to grow up quickly considering the dangers they face.

Still though, it’s not all about fight scenes, and dark alley supernaturals, because there is plenty of downtime, too. Responsibilities, life choices, love-interests and all the infuriating circumstances that come with that (fun!! Especially the push and pull angsty “friendship” that develops between Daemon and Katy). And of course, a bit of older YA high school drama to really mess with them!

I know… we’ve read this “push pull friendship” story many times before. But when done right, I can’t get enough of it. And Jennifer Armentrout does it wholeheartedly. *squeezes* your heart over and over again, at just the perfect consistency to keep us wanting more. Perfectly paced.

I was so into this. Daemon had me chuckling. His arrogant confidence and teasing sarcasm is hard to beat.

Daemon was a total babe, but he was stab-worthy, which, at times, zeroed out the babe part. Not always though.

But what I like most about him? His alpha-male ways. But of course!! 😉 They were in full effect, in this one. He may be cool and aloof (strike that…) especially around Katy, but when Katy starts looking at someone else… ooooh *swoon*. Forget it! He may not outright say it, but it’s obvious, and I love that heartwrenching pressure!

And sometimes I’d be all… Oh come on Katy!! It’s so obvious! Argh!! The angst and resistance was a little over the top.

“Uh, now is not the time to get into that conversation.”

This was just a dream. I sighed, wrapping my arms around his taut waist.

Daemon’s arms tightened around me. “I know, Kitten. You aren’t fooling anyone.”

But when I’d let myself “go with it”, I could see where she was coming from. Her concerns for him, his people, her “normal”, and a connection that *may* or may not be real. I get you, Katy. I don’t think I could have had that kind of restraint, but… yah. Ok. I get it.

Ever since Daemon healed me after the battle with the Arum, we were connected, and while that seemed to be enough fro him to jump into a relationship, it wasn’t for me.

I wanted what my parents had. Undying love. Powerful. True. A whacked-out alien bond couldn’t do that for me.

Kitty, I mean, Katy… you’re a stronger girl than me. 😉 And you guys are in for that very realization!

So what’s it about? For those who haven’t read book #1 yet, go read my review and avoid this one (because of slight spoilers) until you’re ready to move on to #2. Book #1 & 2 are equally amazing, so I HIGHLY recommend it!!

So remember the first book, at the end when Daemon had to heal Katy after that big crazy battle? Well… Katy is experiencing some weird effects from it.

“I think i’m coming down with something.”

His brows furrowed. The concept of being sick was foreign to Daemon. The Luxen didn’t get sick. Like, ever. “What’s wrong with you?”

“I don’t know. I probably got alien cooties.”

Things are changing for her, physically and she seems to be exhibiting some of the Luxen’s powers. When emotions get the best of her, things… *happen*.

Daemon poked me with his pen. I twisted around.

“What was that?” he whispered, eyes narrowed. There was no mistaking the amusement in the tilt to his lips, though.

OMG PLEASE!!! You guys have to read this in it’s full context!!! Hilarious, I’m still laughing from this scene (and many others). But this one… priceless!!!

But she mustn’t draw attention to herself, as that could expose her best friends and their true alien nature. And while she tries to hide her new abilities (hard to do when she gets emotional), a hottie surfer-boy guys (Blake) shows up in school. He thinks Katy is pretty. And Daemon starts growling.

The smirk on his face faded. A muscle in his jaw popped. He looked…pissed. Whoa.

And as Katy’s world expands to include this new guy, she begins learning about herself, and gets a little extra insight into Daemon and… others.

There’s way more to her “alien entourage” than she knew. More, even, than Daemon knew. And there are also some DOD revelations (a division of the government that is aware of the aliens), and well. Lots of stuff happens. LOTS of stuff comes to light. Oh yes… everything is starting to make sense, now, it’s all coming together, but at the same time, has the potential to really blow up.

I won’t say anymore, but this: go for the ride!! While it may not be “adult-steamy” in that sense, your “crush-button” will be fully activated (and it’s plenty… steamy in it’s own way). This series is a “butterflies-in-your-stomach-maker”. It totally is.

P.S. I think Katy rocks. She’s tough, she’s emotional, she has cool alien friends, and she’s a book blogger!!! I loved her book blogging moments. They made me giggle. I felt like she was me. Oh I know, I always say that… I’m predictable. 😉 But I’m tellin’ ya! When the book is really good, and I suddenly feel like I’m the heroine, then I am hooked! 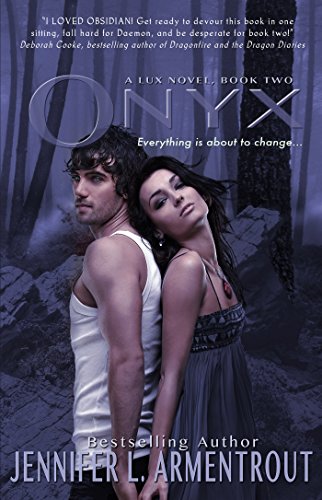 Maryse- Thanks to you I found this series and author. I LOVE it! Thanks for helping this poor book addicted girl out. =)

So glad you’re enjoying it Summer!! I can’t wait for MORE in this series. For me I feel spoiled. TWO Lux books in one year plus that “novella”. Very lucky, indeed.

Yes, I second the thanks! I saw back in January how highly you rated Obsidian, but I did not read it until Onyx came out. Wow…. was I ever thrilled. I love this series and Daemon and Katy rate as a favorite book couple even for YA. Yay for a five star book!

This is a wonderful series. I was fortunate to catch on to this in the last month so I didn’t have to wait too long for Onyx. But now I have the agonizing wait until the next!

Maryse, have you read the Covenant series by Jennifer Armentrout? I LOVE that series! Aiden *swoon*!!

So glad you loved it! It was awesome! 🙂 Seriously soooo good!

Oh, and I swear the model on the cover perfectly captures what Daemon looks like in my head!!!! Never had that before… *sigh* Such a hottie…. 😉

Really glad I decided to try this series. I don’t always go for YA but I totally forgot about it after a little while.

And the model on the book so reminds me of the boy/man living next door that it’s starting to get a little weird. Maybe I should ring his doorbell and ask if he’s an alien 😉

I loved this series! Great reccomendation! The third book comes out in December I think? It left in quite the cliff hanger. I can’t wait!

I loved this series as well as the Covenent series. A few have mentioned the book covers and I wondered how many with ereaders don’t get the covers just a B & W cover page. I find this very annoying. I love this web site though, so much info. I keep downloading recommended books and I have about 60 tbr so far, I can’t resist.