My first foray back in to the paranormal romance world after my “Terrible” urban fantasy-fest last week was hard. It still is. I keep thinking about re-reading the entire Downside series because, let’s be honest. I wasn’t ready to leave their world. Lily and I still can’t stop chatting daily about our favorite parts, favorite lines, what-ifs, what’s coming… But we both agreed. It was time to move on. Now I admit, I haven’t strayed far, since I’m still reading books from the same author. I just finished book one in Stacia Kane’s Megan Chase series. Had I read it before my Terrible addiction, I would most likely be raving about it in my review. But perhaps my “Terrible bias” is holding me back from becoming completely absorbed with Dante (the hero in this book). Poooor unbelievably sexy, suave, cool and aloof Greyson Dante. Actually… nothing poor about him, if we go by the tale told. But in my little “Terrible-obsessed” reading world, he almost didn’t stand a chance (key word being “almost”).

As I recently tweeted:

…is it weird that I’m disappointed the Hero is handsome?

But let’s get on with it shall we? This book (and series) seems to be right up my alley. It’s urban fantasy, but concentrates a bunch on the romance part (which I love). Dante’s beyond hot, and he’s a demon (albeit, maybe not an evil one), although, it’s in his nature not to care much about humans. He is humored by them, and even more so, when they are somewhat tormented.

Until he meets Megan. A human. A psychic psychologist with a gimmicky radio show (the female Frasier?). And she’s stuck with the typical gimmicky slogan “Demon Slayer. Let her slay your demons.” Cute right? Unfortunately, real demons take it literally, and are out to get her. She didn’t even like the stupid slogan in the first place. But apparently, if you “put it out there” some “other forces” might insist on taking action.

“The demon slayer thing. They think it’s real.” She glanced at Dante.

He nodded. “They think it’s real. And they want to get you first.”

She’s suddenly forced to deal with a bunch of creepy monsters that nobody else can see.

Already a little eccentric (trying to hide her psychic side from the public), her new nervous twitchy freak-outs whenever she sees invisible demons are starting to get her the side-eye from her peers. Dante shows up with an offer. He seems to know what’s up (but he’s curious about her, and what her deal is).

“Oh absolutely. When you were born the angels sang. You humans are obsessed with that concept. You haven’t been chosen for anything, Megan. You’re simply an anomaly and we’re still trying to resolve it without any problems.

Of course, despite all the weird things she’s been seeing, she gives Dante a hard time about his “demon-ness” (and that’s always fun for us readers). The push-pull struggle of the human accepting the paranormal.

“You say your a demon. I say they don’t exist. Where’s your proof?”

He raised his eyebrows and looked at the little fireball still burning merrily in his hand.

She seems to be more than just a psychic. And while it appears he’s helping her and teaching her about the new world she’s unwittingly involved herself in, is there something in it for him, and his crew?

The crew (or part of it, anyway): In my opinion, all the main characters are great. They eventually seem to become a little mismatched family.

The voices of the brothers behind her made an oddly homey accompaniment to the sizzling meat. It struck Megan how strange all this was. She, who’d never had many friends, had never had that “urban family” people talked about, now had three demons sitting in her kitchen sniffing the air with smiles on their faces and chatting about sports.

She put in the last batch of meat and started seasoning it, adding the scents of rosemary and onion to the comforting fog of the air. Her stomach growled.

I very much liked, these gentle moments in the book. I felt like I was a part of their unusual family.

A pompous witch who inadvertently becomes Megan’s teacher (she reminds me of Pam in True Blood). A hot Demon lover that seems SO intent on Megan but may have other motives. Three thuggish demon bodyguards that you just wanna cuddle and hug on (I adore them). A reporter intent on getting and exposing Megan’s true story. Friend or foe? And Megan. I like her. She’s got some skeletons in her closet, and even a few she can’t completely remember herself, but, yeah, I like her.

My dislikes? Well, Megan’s reactions to her new situation don’t really make sense. She’s either a little to accepting or a little too naive? And she’s too quick on Dante’s button, but I guess, who wouldn’t be? Also, there is a major magic/power struggle that I couldn’t follow. But luckily, as in all of Stacia’s books, it get’s explained in a few lines, and all is well. You go “ohhhh, okay – I get it – I think.” hehe 😉

Okay, so honestly. I really liked this book. I sighed (Dante is very sigh worthy). He gets really mad and intense, can make you grit your teeth and can be incredibly romantic. No not romantic.  That’s too easy. Impassioned.

The urgency of his voice, the feel of his hands on her skin…there was no going back and he knew it as well as she did. A new possessiveness transmitted itself in the way his hands rested on her waist as he pulled her to stand in front of him, the way he pressed her to him.

There are a few scenes that really tugged at my heart, and made me somewhat teary-eyed. What’s his angle? I dunno. There are two more books to help me find out though 😉 And off to #2 I go.

P.S. Stacia gives us that very delicious sounding Meat Pie recipe at the end of the book….I’m tempted to make it, because it sounded mouthwatering (hey, I like meat!). Unfortunately, I’m NOT a cook by any means, so who knows what kind of massacre I will create. Perhaps I should let my husband (AKA “The Midnight Chef”) do the honors? 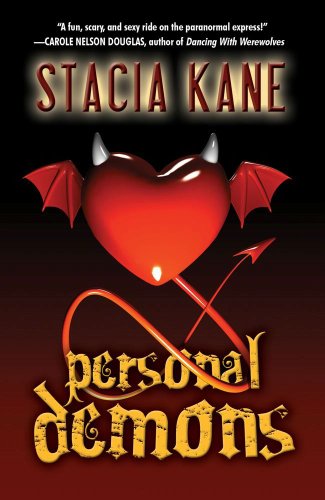 I loved this review that you made on this book… it makes me want to get into this book after I’m done with the previous series… I’m following into your reading footsteps it seems… but that’s just great for me. No need to guess, I just follow your lead! xxxx

Hey Grandmaker! Yep we are all reading together! This book is getting good now….