Razing Kayne (Walking A Thin Blue Line)
Overall, this one was good, at times great, but I struggled with the ending. The big mystery/suspense reveal didn’t seem to fit the book, for me. The reveal took this beautiful, plausible story and gave it an outrageous answer.

It started out absolutely devastating, slowly turning into a beautiful love story of growth and healing (for everyone involved). Two perfectly matched souls that just had to learn to trust again. And an AMAZING, exciting reveal towards the middle. Something that had me gasping and thrilled me. I was dying to know how it was going to play out.

Oh sure, at times I was exasperated with his resolute demands that he couldn’t get attached. Insisting that, despite the obvious, this wasn’t “going to happen”. And then a few very important “mini-reveals” as the story really got going, well… even those reactions at times had me thinking… wait, how did he come to that conclusion? Sometimes I didn’t understand his reasoning and his internal musings were a little… over the top, when really, just calming down and listening might have answered his questions without causing even more “crazy”. But you know… there’s gotta be drama. 😉 (even though if you ask me, there was already plenty with the awesome mid-book reveal).

Oh and… there was “Cody”. Don’t even get me started on him. A potential “villain” in the story so of course, I was meant not to like him, but at times the stuff that came out of his mouth was… again, over the top (even for the possible bad guy).

But barring those “Oh come on!” moments, I really connected to the potential love story, because it was deep and all-encompassing. It was more than just about “them”. It was about family, and how terrible circumstances could still lead you to a place that absolutely needed you. That you really needed. In turned completing you.

Kayne (a police officer) comes home one night to find his home life completely annihilated. His wife standing over his dead children, in turn takes her own life right in front of him.

… she pulled the trigger, doing the only thing she could to him that was worse than killing him.

Leaving him to live with the knowledge he’d failed his children and his wife.

Devastated and utterly discouraged by the investigation from his own police force, he leaves and travels to another city to start his life over. Actually no. He doesn’t intend to ever “live” again, but he’s just desperate to escape the memories in anyway he can. As time moves on, he eventually meets “Jessica” in a traffic stop and sparks fly. He finds himself flirting, and she’s flirting back.

As their paths keep crossing, their attraction grows. And when he hears her story (her own firefighter husband was killed) and realizes she is raising four young children on her own, they become friends. And he starts getting attached to this sweet family, despite insisting to himself that it was a bad idea.

He needed to stay away from them because he knew one of these nights, as he sat on his couch with a bottle of whiskey and his loaded firearm on the coffee table in front of him, that he was going to scew up his courage and actually pull the trigger.

He never wanted to give anyone the chance to miss  him the way he missed his children. He would not break someone the way Oksana had broken him.

And boy does he run into quite a few surprises along the way. Stuff that made me go… No. WAY!!! Wow!! Even though occasionally far-fetched, I’m okay with that if I’m connecting to the characters. After all, this is fiction. I don’t mind a few “crazy” fated situations or coincidences.

So I loved that part. There were moments in this book that caught my breath, and made my heart stutter. Made me honestly go “awwwwwww” right out loud. LOVED those, and there were many of ’em.

I’m sorry, he signed in American Sign Language. So sorry, he mouthed, his left hand still resting flat over his heart. Jess closed her eyes and looked away, fighting tears. Yeah, she was sorry too.

Oh help me… I fell for him BIG time there. And I was hooked on Kayne the rest of the way.

And that’s why the reveal felt a little too tawdry, to me. Oh it’s something, alright. It wasn’t at all what I was expecting, but honestly didn’t know what to expect so I was game for anything. I just didn’t think it was going to be that. There was plenty of real-life drama in this novel, the whole “triumph overcomes tragedy”, right here that I don’t think it needed to go there.

So for that I’m going to give this 4 stars. <— 4.5 stars for the love story and 3 stars or less for the reveal. The romance, personal connection and healing was such a big part of the book that I’ll try not to let the “reveal” ruin the overall effect for me.

Thank you to the author for sending me this review copy. Kayne was amazing. 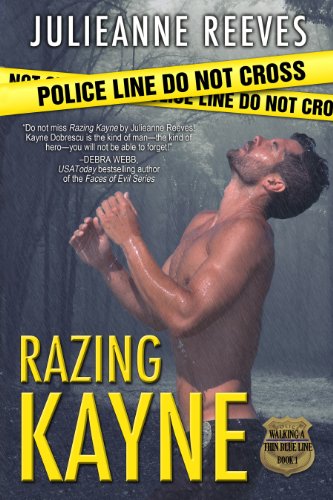