Reaper’s Legacy (Reapers Motorcycle Club)
One of my more favorite biker/MC reads, because not only are these guys everything we love in a “bad boy” hero (or anti-hero), the writing gives them and their lifestyle a true-to-life feel (at least, as far as I know), when it comes to the “biker” world.

The author “keeps it real”, and made sure not to… er… *blushes*

“pu$$y-foot” around when it comes to their hard-coreness. Okay sure, I’ve read more hardcore and crazy stuff in other biker favorites, but this comes close.

Let’s just say, that they are sexy bad-ass males with dirty dirty mouths, and they’re not too worried about who’s in their vicinity when they let loose. And  you know me… when it comes to reading, those are my favorites, because I’ve known men like that. I know they speak like that. I know they think like that. And I love it’s truth. I prefer my “escapism” with a large dose of unfettered realism. These guys live life as free as they can, and make no apologies. Sometimes, not even to their women. GAH!

Sophie (a single mother) is raising her very young son in unsafe conditions, on meager earnings, and an insecure future. That’s okay, ’cause “Ruger” (her “brother-in-law” of sorts) finds out, and comes to her rescue.

“You don’t get to make that decision. He’s not your son, Ruger.”

“Decision’s made,” Ruger replied. “And he may not be my son, but he’s definitely my kid. I claimed him the minute he was born, and you damn well know it’s true.”

Of course due to his coarse “biker” style bad-ass attitude, at first, it doesn’t seem so much “rescue” as… “Woman! You’re coming with me OR ELSE!!!!!” Or else what? Exactly. <— side note: Southpark reference in case some of you are wondering if I’ve lost my mind. *smirk*

Life would be so much simpler if I could just hate him. The man was truly an a$$hole. He just happened to be an a$$hole who loved the hell out of my kid.

But alas… the situation she found herself in, once in his care and amongst his entourage, was MUCH better.

“It’s time you admit you can’t do it all on your own. Club’s full of women who love kids. They’ll help out. We’re family, and family doesn’t stand by when someone’s in trouble.”

That was the biggest problem with Ruger – he was a package deal. You bought one Reaper, you bought them all.

Well, all if them who weren’t currently serving time.

Yep… that ↑↑↑ (’cause club rules take effect as soon as she entered their world) but also… potential heartache.

I didn’t want his attention, or to get more involved in his world.

I’d never been more than a toy to him, and the men in is family had a history of breaking their toys.

They just did it in different ways.

Because, you see, Sophie and Ruger have always been intensely attracted to each other, without the other “knowing”. He thinks she hates him ’cause of his bad-ass ways, and she thinks he’s always thought of her more like a little sister. But over the years, they’ve shared some very significant moments, including the mutual dislike of her ex (his brother)… and the birth of her son. In fact, Ruger delivered him.

Ruger looked up at Sophie as he raised the baby between them. She smiled hesitantly and reached for her child. Her exhausted, tear-streaked yet radiant fce was the second-most beautiful thing he’d ever seen in his life.

Right after those tiny blue eyes.

“You did good, babe,” he whispered to Sophie.

So let’s just say, it’s a little too close for comfort when Ruger finally admits his attraction, but also reminds her that he will NEVER settle for one woman. Not even for her.

“Don’t look at me like that,” he said, closing his eyes. “Despite what happened this morning, I’m not trying to start something with you, Sophie. You realize how f%&ked things would get if we started screwing each other? I’m not looking for a relationship and I’m not a one-woman man. We gotta work together for Noah. You know that.”

Couple that with the rough-life of the “MC” entourage and their enemies, and Sophie’s got her emotional-work cut out for her. She’s never been safer and in better company. And she’s never been in more danger, too. In danger of losing her heart… and maybe even her life.

You’ll see. A few scary surprises a long the way,  with an unhealthy dose (<— my favorite kind) of bad-ass angst.

But just so you know, it is a romance read, and therefore not too out there in it’s depiction of “the life” (detailed but not gory), but plenty enough of the “crazy” to thrill us. This one’s for those of us that like the more raw and unpolished book alphas that are overloading in testosterone. And while this author does indulge us in super-steam, intense ummm… “romantic” (if you can call these guys romantic <— tee hee!) declarations (more like outright claimings), and a sweet, albeit unconventional, love story, she does so with a large side of grit.

Not so much eye-rolling sap (as these guys are no prince charmings), but plenty of jaw-dropping “Did he just SAY what I think he said!??” moments. Oh yesssssss. He did. ROAR!!!!!!! (and YAY!!!! ’cause OMG we are in for a ride)! So good, so real, and exactly what I was in the mood for.

*sigh*. Ruger. A total knight in shining leather. Okay, not so “shining”. His bike is, though. 😉

P.S. Thank you so much to the author for the review copy. 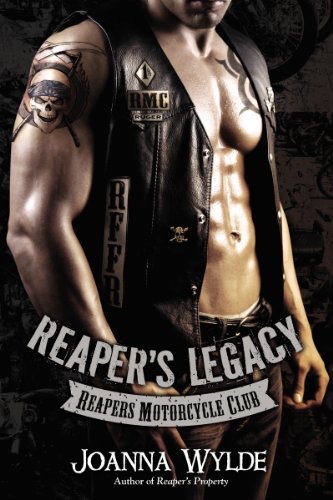 Sexy bad ass males with a dirty dirty mouth….SOLD. It next on mt TBR list. thanks for the review Maryse.

“Outright claiming” *is* the kind of romantic gesture I expect in a biker book. 😉

LOL Erin! Oh yes it IS a dirty one!

Agreed, Amy!!! And there is much “romantic pleasure/gestures” to be had in this one. 😉

So glad you read and reviewed this. I loved Ruger even with his bossiness (or because?). 🙂

loved this book and can’t wait for more, loved Ruger but also wanted ot slap him many a time lol, his whole u can’t be with anyone else but i can,, i’m glad she stuck to her guns on that one ,, well she tried lol but hey i probably coudln’t hold out either lol

Great!!! Now I really want to read this book!!! One of my friends asked me how much I spend on books each month. I said $20.00 (I obviously under quoted) LOL!! No one really needs to know!! I’m afraid to add up my charges. But every purchase is so worth it!!!

This wins my award for hottest biker book cover!

I thought this was a well written book, however, it was just a ‘meh’ for me. I never like my hero to mess around with other women. Cheating or love triangles are not my bag. Just personal preference. I am really looking forward to Liam and Em’s story next.