Savage Rhythm (Club Volare)
I admit it. The cover got me. 😉 I mean, just look at him. He’s so strong and brooding-looking. But what had me adding it to the top of my TBR list was the promise of not just a rock star romance, but a Dom rock star at that. Yes please! I’m was in!

I don’t have that much experience with the whole D/s romance-book culture yet, but I always seem to love ’em when I read ’em (even those where my “star rating is in the 3’s). ‘Cause sometimes, I find them to be a bit much, a bit fluffy (and I eyeroll or giggle at some of the stuff said…), but I still never forget them. In the end, the collar always gets me. Tee hee!

I love the whole dynamic of the super-experienced, gorgeous, hulking and coveted Dom finding his perfect “subbie” even if she doesn’t know she’s a “sub” yet. Her initial reactions to his demanding ways. Her “OMG. Did he just tell me what to do?” thoughts, mixed in with her innate, immediate response of actually obeying him. Of her body doing exactly as he just “commanded” her to do. Oh the dismay, the confusion and the excitement! Kind of like the alarm of a human female finding out out her boyfriend is actually a “paranormal” creature of sorts. The shock and initial fight or flight response (’cause it’s all SO wrong) mixed in with the desire to keep going, with him. Fun times!

There’s just something about the perfect book-Dom (I dunno about the real-life ones, so I’ll just go with what I read), that gets me. They exude a captivating, almost supernatural, power that can’t be denied. They have a seductive “aura”. Throw in that whole trust, and protecting what’s his (oh yes… the “MINE” factor is strong in these ;)) and you’ve got a swooning me!

Plus you’ve got a little of that angst. The Dom’s are always warning the new sub with the whole “I don’t do relationships” thing. They can have fun and he’ll teach her lots of things… explore it for as long as it “works” and she’s all *swooooon* “…well I can learn a few things and get that other jerk out of my head in the meantime…“. And when it starts working too well? Let the “MINE” reactions begin.

And this one was a fairly light version of the D/s genre I’ve read in the past. Almost too light for me. While I’m not much for the BDSM scenes (I often slightly skim those parts ’cause I just don’t get the physical aspect of it much), why I read these is for the intense emotional connection and extreme care that the Dom takes with his sub. The whole “he controls her… he controls everything… but she holds all the power” thing. And the fact that when she’s with him, when she finally trusts him, she can relax and let him take over.

While I was happy there weren’t many BDSM’ish scenes in this one, (it was mostly focused on the connection between the two main characters), I didn’t find him “Dom” enough. More just… alpha. Which I love, don’t get me wrong. But I wanted a bit more of that Dom *oomph* this time. Doms take “alpha” a few steps further.

Molly is hired to tour with the HUGELY famous band “Savage Rhythm” to write their biography and to secretly try and uncover the “big secret” that the lead singer (Declan) is hiding about the departure (disappearance?) of his famous guitarist. Their falling out. Something happened, and the “cover” story just isn’t adding up. And what an extra surprise she gets when she realizes he’s a Dom!

…. this is what had obsessed her since she’d put two and two together, she had been hired for the job through Club Volare L.A.. Which meant that Declan Donovan, confirmed rock star sex god, was also a Dom.

Molly had always fantasized about dominant men. She’d been drawn to the Club Volare posting because she wanted to learn more about their world. About the sorts of things a Dom might do with her. But never, not once, in her wildest dreams, had she imagined that Declan Donovan might be one of them.

And of course, when Declan and Molly first meet, he’s taken by her. His Dom recognizes the sub in her and he wants to take her over… his knee. hehe. 😉

“Don’t order me around.”

sidenote: Oh wow… yeah!! I loved that look into the issues a famous guy might have as a Dom, too. Some super-fans might let him do too much, and get hurt in someway, in the process…

Resistant Molly already knows she has submissive tendencies, but her very bad experience with an ex-boyfriend left her disheartened and embarrassed (oh… as those memories are revealed, you’ll be fuming). She doesn’t trust, her self-confidence is low, and she doesn’t want to “go there” again. Who can blame her?

F&$k. She could not afford to get carried away thinking about Declan in a sexual way, and not just because of the job, either. No way was Molly setting herself up to be f#$ked over by a guy like that again, even if Declan was the real deal, where Robbie had been a cheap facsimile.

No freaking way was she going to lose control. It cost too much.

But you know Doms… where there’s a will, there’s a way, and he doesn’t let up until she lets him in.

*gulp* Whoa. See me swooning? That was… whooooo. *thud*

Real good! A great “in-between” read. Maybe even a great beach read? It’ll keep you reading, enjoying, but might not have you physically reacting (which in public, is a good thing).

Nothing too angsty, even though this has a bit more substance to it than some D/s books that I’ve read. There’s a certain growth as both of these tortured characters learn to trust and rely on each other for some of the things they’ve locked up tight within themselves (some dark moments).

But he acted like a man who had the weight of the world on his shoulders. Like it was very much his responsibility to fix it.

Declan did tickle my alpha-bone, and did make my heart clench a couple of times. I eye-rolled at one of her over-reacting decisions,

While I LOVE the “club” books, I often feel out of my element while I read them. They’re a whole different world, with a whole new set of rules, and I feel like I’m in an alien environment (which is part of why I love ’em). I just can’t read many of them in a row ’cause I get a little… disoriented.

But this book? It’s got an easy feel. If you’re intrigued by the D/s books but want to start of slowly, this one’ll do! He’s bossy but he’s not too bossy. I know I’ve fluctuated between being absolutely appalled and yet tantalized by some of what a Dom might say. Er… I mean command,

so going into a hard-core Dom book when you’re not sure you even like that sort might be rough. But this one’s a soft intro.

It was good! Lots of my favorite romance “things”, explored, but maybe just not to the intensity that I was craving.

P.S. this is the latest book in the series, and it was the first one I read, so, yes, it reads perfectly as a standalone. Although I wonder if I would have enjoyed it even more had I read the previous books in order? I have a feeling the bad “issues” that the lead singer was experiencing in this book might have actually played out originally in the book before it? There’s history there, I can tell. There seemed to be a deeper knowledge (something bad went down) there that I was missing, but then again, the “missing info” made me experience this book just like Molly. Uncovering it bit by bit until I knew the rest. Also, we meet “club characters” that seem to have a certain angsty tension between them that I’m sure has been building throughout the course of the series, too.

So for those of you who are hardcore “reading in order” readers (I get you!), here is the Club Volare Series Reading Order 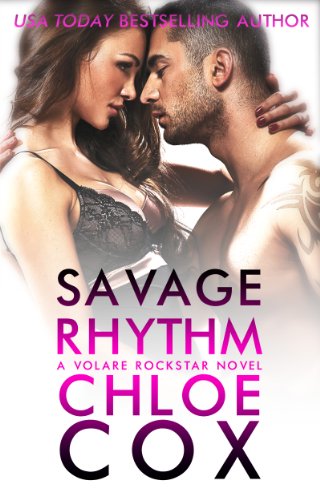 Good review & this was the first book I read AFTER Arsen, so I was enjoying, but having trouble finding that book that will take me back to BEFORE Arsen. I have started a few (set aside), finished two (had been sitting in my Kindle), but only BOUGHT one (that is so not me, but husband will like that).

Yes!!! This was after Arsen for me, too, so that might have “influenced” (and dulled-down) my reaction to this one somewhat…

Trying to find that *oomph* again. It’s like an addiction, I tell ya! 😀

His past issues didn’t play out in previous books – if I remember correctly, he shows up in the one before, but not much was mentioned about him, apart from his shocking attempts at baking cookies. Lol.

I can’t imagine reading it right after Arsen – it took me a few books to finally get over the book funk Arsen put me in!

Oh my gooooodness yes the cookies were referenced in this one and I swear I crushed on him so hard at that point. Awwwwwww!! The bad-ass “Dom” on a baking binge. 🙂

Thanks for letting me know I hadn’t missed much of his story. I was sure there might have been some “play” issues with him and that… girl.