Secret Life of a Vampire (Love at Stake, Book 6)
Ahhhh a quick trip back to my sweet gentle, vampires, and what a pleasant jaunt it was! After the intense, angst ridden, tumultuous world of Adrian Phoenix (which I love – don’t get me wrong),  it was a comfort to get back to the love stories of Kerrelyn Sparks.

While her novels always have an element of danger, with fierce enemies, she always indulges us with a personal tour into a new (yet familiar) love story about an unconventional couple.

In this novel, we explore the past and present, of the son of the original “Casanova”, named Giacomo di Venezia. Noble, old fashioned, and staggeringly sexy, he has experienced three crucial heartbreaks in his short (only 200+ years) life. Despite being captivated by a beautiful red-headed human police officer (Lara), he fears getting too close, for his secret is sure to repulse her.

Her attraction to him compels her to continually seek him out (she convinces herself that it is in the name of the law – due to his strange abilities at mind control), but she finds herself uncontrollably charmed by him (despite his inability to use his powers on her – she is able to unconsciously block him).

A funny part where Jack and Lara first meet (he was at a disruptive “bachelor party”), and she and her partner Harvey were sent to investigate. The vampires are trying to mind-control the two police officers, but are only successful at mind controlling her partner, Harvey – in this instance he is doing everything they tell him to, which is bewildering Lara:

I’ve tried controlling her, but it doesn’t work, Laszlo told him mentally.

I know, Jack answered. She was every Vamp’s worst nightmare. A beautiful woman who could not be controlled.

Perhaps she has psychic power, Laszlo continued. Or she could suffer from some sort of mental defect that’s blocking our power.

“Did your mother drop you on your head when you were a baby?” Jack asked.

Harvey sniffed. “Yes she did.”

“Not you,” Jack muttered.

As a police officer, she works on a case where females (similar in appearance to her) are disappearing off college campuses, and with “Jack’s” help,  they uncover a serial “kidnapper” pattern that seems to suggest that the evil Vampires are behind this.

In the typical Kerrelyn Sparks “Love at Stake” arrangement, we are brought down a path of discovery, desire, friendship, danger, angst and wherever all that leads to…

She rested her head on his shoulder. “The stars are lovely, but I wish there was more light. When does the sun rise?”

“Too soon.” he nuzzled her neck. They had less than three hours before he’d have to teleport them back to New York City. He couldn’t risk falling into his death-sleep in front of her. “This is a good time to be here. The city is quiet. All you can hear is the lapping of water against the buildings and the occasional hoot of an owl.”

She folded her arms over his. “I’ve always wanted to see Venice. Thank You.”

“Bellissima, we have barely begun.” Jack pointed in the distance. “Do you see the light on the water? That is our gondola, coming to pick us up.”

“This is so cool.” Lara turned towards him, smiling. “Thank you for dragging me here against my will.”

Although it was similar to her past tales in this series, (lot’s of silly innuendos) I liked this one. Jack was believable. There was lot’s of witty repertoire (in particular, his reaction on page 325 had me giggling). I felt at ease, and wore a silly grin to the very end. 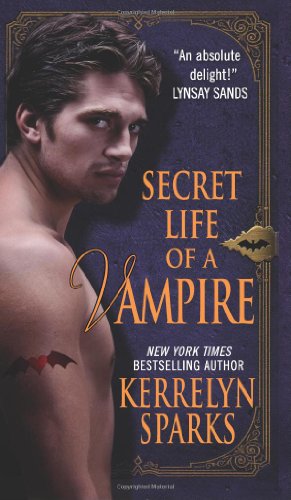