X
You are here: Home / My Book Reviews / Book Review – Seithe by Poppet

Seithe and Phoebe (Neuripra Book 1)
I happened upon this one on my latest “freebie list”, when a few fellow readers pointed it out, and I’m so happy they did. It turned out to be a non-stop read for me, with lots of emotional upheaval in all sorts of good and bad ways. The author wrote the main character’s perspective and thought processes so well, that I too, had all of the adrenaline rushes, experienced the same confusion and doubts, and felt her parallel feelings of immense attraction to, and desperate fear of the one that calls himself “Seithe”.

Jasmine: Yes adult and it kind of reminded me of Fifty Shades but of course not as in depth… I really liked it. Its kind of a different perspective of the sub/dom relationship.

Maryse’s Book Blog: … It’s dark, eerie and so mesmerizing and weird. He’s scary and confusing and making a mess of my brain, and yet… I’m drawn. At 25% and I’m practically highlighting everything. Loving it so far, and it was free! I think it still is.

Erin: This book stayed with me long after reading it! Loved it!

I loved how this book started.  When it comes to paranormal books, I find myself preferring a “human/real world” situation where a girl inadvertently ends up in a place she should have never happened upon. Especially the “bar” scene. That one place where the likelihood of “pickups” could lead to future problems instead of finding the love of your life (and that’s the human scene!!). It’s gotta be even worse, when the club’s patrons are paranormals hungry for human blood. And you just know… the outcome is gonna be so bad, that it’s gonna be good.

As was the situation here. Phoebe, furious and completely over men, stalks into a club that she’s never been to (but just realized existed), hoping for a drink and some downtime to ease her anger.

There comes a time when you know if you don’t put some space between yourself and him urgently, someone’s going to end up damaged and broken.

She immediately realizes things are off, as the patrons stare at her, and one immediately “claims” her. He gives her something to drink (Phoebe!!! Don’t you know, you should never accept drinks from strangers in bars!!) and things get weird. VERY weird.

Hot lips close in on mine as my legs lift off the floor. Draped in She’s-with-me’s arms, I struggle with nausea and consciousness. Red eyes pop to look down at me, laughter, music, strobing, scared.

What have I done?

Blackness. Darkness closes in and eradicates the lucidity from me.

And that’s the mood for the first 30% of the book. Just… off. Everything is convoluted, dark, eerie and scary. Seithe (the one who has “sponsored” her so that she may remain in the club) is sort of a head case. At first she thinks his vampire “look” and the way he acts is eccentric, and she plays along.

Turning to Mr Rescue to thank him, my breath catches, as I notice he now has brown hair and brown eyes. What a trip this guy must be. You could never get bored, he’s a different guy even thirty-two seconds.

“You forgot how exciting it is to be alive, didn’t you?”

What kind of question is that?

She begins to wonder if she will get out of this alive, yet she can’t manage to resist his pull.

“Through here.” And he pushes a hot palm over my heart. Stepping in, he wraps his arms around me, “You can’t escape, Phoebe. You are a prisoner until you find the key.”

Let me tell you… it gets dark and it gets scary. Mind-warping scary, but mostly on a mental level. She questions everything but the answers… they could be anything. In fact, I’ve just discovered that while many could not put it down, some just could not get past this part, and did put it down. Yep. It’s dark, and super-moody, and just eeeeeeeep!! (at times)

“Be careful princess. You’re flirting with fire. It burns.”

“She has free will,” Seithe challenged back.

“And she chose you?”

“Does she know what she chose? Did you explain it to her?”

I thought the book was going to continue on this “dark” path all the way through, but things start coming to light, and and the “feel” of the book takes a more natural turn (something I could somewhat relate to)…

… easing my own worries that this book would pull me into an abyss that would take days to get over. The “real” world comes back into the picture. I start seeing the light.

Of course, things never become “fluffy” per se, as the truth (and the lies) are revealed. Other paranormals attempt to enlighten or sway Phoebe into a different direction. There’s a reason for all of this. Who to trust, if any of them? She’s in a nightmare and yet, could the star of it, be her dream man? There were a few twists that had me… worrying.

And as dark as this book can be at times, it’s got plenty of believable passion, romance and steaminess (and the scenes, well… very descriptive, but not the usual when it comes to such a scene. You know what’s happening, it’s detailed, and yet sometimes… kind of almost like… I dunno? An out of body experience mixed with reality? That’s the best I can describe how the scenes are expressed). But it’s all there, and extremely intense. I was weak at the knees…

There were a few things I questioned (other then Phoebe’s sense of self-preservation, and her own sanity). LOL! Stuff like… well, the obvious “otherness” of Seithe that she barely even questioned, from the start. But I shrugged it off, and went with it. Maybe he is just so darn enthralling (and the way he is described.. he *is*), that those questions, or his lack of answers, just didn’t bother her much. Hehe.

This is the kind of man women will do anything for. We are shallow, but the gene pool preference instinct demands copulation with the type of male. And he’s an alpha with a capital A.

Oh and! There are some heart wrenching scenes, too. Phoebe can cause emotional pain with the best of them, and this gave the book a more “human” feel, which I appreciated (even if I was livid/confused/desperate for relief). Overall, I loved the book, and will continue the series. I’m interested in the author’s take on “fallen angels/God/vampyre lore” situation, and while some of it made me uncomfortable, there were many descriptions and situations that had a certain… depth and intrigue.

P.S. as I was backtracking through my email recommendations for this book, I just realized the author sent it to me a year ago!! *sigh* What took me so long? 😕 Oh well, I’m glad I got to it. Well worth the read!!

Interested in the series? Check out the reading order guide: https://www.maryse.net/reading-order-guide/poppet-the-pravus-series-reading-order.html 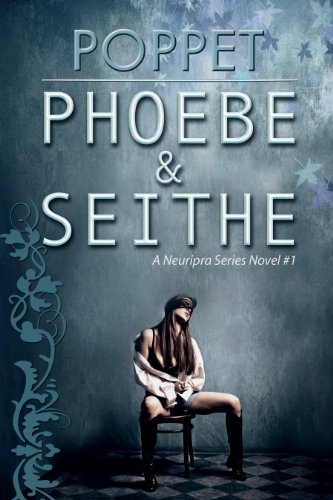 Wow Maryse. How does an author adequately say thank you for a mind blowing review?

This is the best review I’ve ever read. Thank you so much!

I’ve overlooked this book many times on amazon, I think I will give it a try, your review sounds very promising.

🙂 I can’t wait to continue the journey! So happy this is a series.

Hi Maryse, is this still a freebie? If so where can I go to get it?

Don’t worry I worked it out 🙂

God Maryse! You read books so fast! How can you do this? hahahaha

I was having trouble deciding on my next book & I just can’t justify buying a book right now when I already have so many freebies on my Kindle. So I searched your blog for reviews & decided I’m starting this one today!