Shadow Kiss
I read these three books in two days! I couldn’t get enough, and the third was the best so far! I think I actually *snarled* a few times at whatever interrupted me out of my reading marathon.

It is near graduation for our favorite students of St. Vladimir’s Academy, and Rose is now in the last part of her Guardian training (field experience). For the next six weeks she will be assigned to fully guard a Moroi student, and she is thrilled since she is certain she will be assigned to guard Lissa. To her dismay, Lissa’s boyfriend, Christian, is her Moroi. Despite her insistence that the school has made a bad choice, she reluctantly understands their logic and accepts.

Plus, I was about to spend six weeks with Christian Ozera. He was sarcastic, difficult, and made jokes about everything.

It was going to be a long six weeks.

Rose faces larger obstacles, though, as she feels certain uncontrollable rages welling inside of her, darkness that seems to have a life of it’s own. All the while, she is also seeing apparitions of her recently murdered friend (that no one else can see). She fears she might be going mad, and along with Victor Dashkov’s upcoming trial, is acutely aware of how the stress is affecting her Guardian abilities and her relationships with everyone around her.

Hiding her fears from those she loves, she tries to cope with the changes, and continues to research other Moroi and dhampir history (learning something VERY important about herself, in the process). The only one who really seems to see past her “walls”, is Adrian, a spoiled rich Moroi Royal with a bad reputation (although he seemingly has an honest affection for Rose). I simply adore his character. He was introduced to us as another older “bad boy”, but his character integrates well with the group. He shares the similar type of “spirit” magic as Lissa does, and notices that Rose’s aura is off.

“Don’t worry little dhampir. You might be surrounded by clouds, but you’ll always be like sunshine to me.”

While Rose and her crew experience the trials and tribulations of life (Rose experiencing more trauma than anyone these days), evil continues to lurk and Morai’s high society continue to be split in regards to their future. Reluctantly their society realizes that change is imminent and that the only way to cope with the growing threat is for the Morai and dhampir to work together (although some Royals have specific plans of their own). While change is coming, their difference of opinions may contribute to their own demise.

There are MANY touching  and triumphant moments in this book, and I am certain you will be quite pleased with the emotional content throughout. We continue to be tantalized by Rose and Dimitri’s “love triangle”, albeit, a different kind of love triangle (the third angle being their sense of duty and obligation to what is right).

One of my favorite scenes is during a surprise field testing “attack”, when Rose has to take on three of her Guardian teachers at once (one, being Dimitri). The detail is terrific, and you will feel as if you were watching a movie, and the development will put a smile on your face.

And of course, something a little later…(a little “heart candy” to tease you with):

At the same time, we pulled back briefly, still oh so close. Everything in the world rested on that moment.

Then his mouth was on mine again, and this time, I knew there would be no turning back.

While the plot is thick and intertwined throughout the book, I can’t tell much more without ruining the story. I will just say that it is a perfect compliment to part two, and you MUST read this series.

This third book, however, ends on quite the cliffhanger, and I am anxiously awaiting the next release (August seems so far away! I miss them already!) 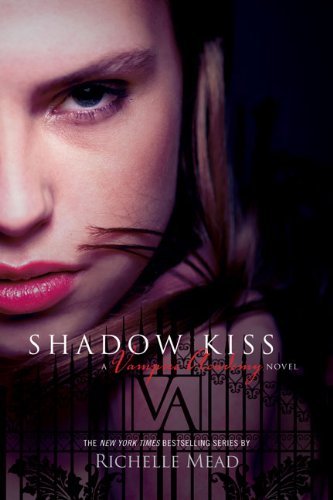 I just want to say that I think the ending of this book is soooooo bogus. Why him!? Why did he have to be one of them!? I feel so hurt and betrayed as a reader. However, I keep reading…..there might be a silver lining….there has to be…right?

Hey Roxie…but here’s where you’re lucky… There are still two books after this one, ready and waiting to be read. When I read this book, I was still stuck with that nasty cliffhanger! Read on.

Although I admit, it kinda gets worse from here LOL (the latest book was really good though). I still love the series even though I’m stuck in another cliffhanger again (two books later).