Sin Undone (Demonica series Book 5)
I had a great time reading this book. The love scenes were steamy, I was able to follow (and visualize) the action scenes from start to finish , and the book frequently made me giggle (Sin’s internal musings were quite *something* – or was it my glass of bourbon? LOL). No, definitely, it was Sin 😉

And again, as I mentioned in past reviews of this series, what I like about it is that Larissa concentrates on a main couple, but allows a side story to flourish, giving the reader double the reasons to feel emotional.

Sin has basically wreaked havoc on an entire species. Like her demon siblings, she is has an extraordinary power. While two of her brothers can heal in various ways, and one can tell the future, she and her twin brother have unfortunate “twists” to their powers (probably due to being “half-breeds”). Her brother Lore is required to glove one hand as he can immediately kill with just a slight touch (and can also use it to resurrect, but not without consequence), and she is able to willingly inflict various diseases, again, by touch.

The dermoire, a paternal history of her demon heritage, had come with a raging libido, and the ability to infect anyone she touched with a disease that killed within minutes. As sucky as that was, her twin brother, Lore, had gotten it much worse. She could at least control her “gift”. He couldn’t touch anyone but his siblings and mate without snuffing them.

This time, however, the disease she caused her intended recipient became contagious, and many “turned” Wargs are being infected and dying within just a few days. Even the innocent. The paranormal hospital (and her brothers) are frantically trying to find a cure, and they quickly realize that one of their own employees is a carrier of the disease (oh yessss!…remember Sin’s little “tryst” with the half vampire/half were “Con” in the last book)? Well, they should have used protection (or whatever that may be for paranormals). Yup, he’s got it, but it’s not making him sick, and Sin now may have the ability to find the disease within him and learn about it (and perhaps help fight it).

“What? I have the disease?” Con exploded out of his chair, but Eidolon held his hand up in a stay-calm motion.

“Not exactly. It’s in your blood. Your body isn’t attacking it, nor is it attacking you, and you aren’t producing antibodies. But when we introduced Sin’s blood to the mix in the lab, your white blood cells and her joined forces to attach the virus.

Problem. Con and Sin can barely stand each other. He picks on her promiscuity (hey dude, give a succubus a break, will ya? She needs it to live…sheeesh).  Sin, already cold to the world, and men in particular (she’s dealt with quite a past), despises his arrogance and double standards. While her body may not say no to his irresistible good looks, his cockiness, and her fear of her increasing attraction to him, helps solidify her stance against attachments.

“What are we talking about, Sin? You don’t want anyone to own you…or your heart?”

She laughed bitterly, and entered the Harrowgate. “I don’t have a heart for anyone to take.”

Forced together, they must put their differences aside, long enough for her to work the disease out of his system and help find a cure.

And we all know what happens when two people are forced to work together for the sake of man-kind (or in this case…Warg-kind). Emotional stuff…steamy stuff…yummy alpha male stuff….the good stuff!

He crawled up her body, his muscles tense, bunching as he moved. “I’m not done with you sweetheart,” he growled. “Not. Even. Close.”

Con is forced to hide and protect her since the paranormal equivalent of the police are after her, along with a few assassins wanting to take over her new prestigious title of Den Master. It just wouldn’t do to have Sin taken (or killed), while an entire race is perishing, considering that she is such an integral part to their survival.

…now, his only concern was keeping her safe.

If she died, so might the only hope for getting rid of the virus in his blood.

Plus, her brothers would kill him. A lot.

But that’s not the end of it. A potential paranormal race war is brewing. “Born” Wargs who have always been prejudiced against “Turned Wargs” are hoping to eliminate them from the species (since it is only the “turned” that become infected), We get a new look into all sorts of paranormals that are hiding some very big secrets (Con included).

The fate of the paranormal world is about to change again…and perhaps the fate of all, along with it.

My favorite parts? Anything that involves her brother’s protective nature, specifically their growling threats towards Con regarding their little sister. But one of my favorite scenes (I had to read it to my husband it had me giggling so bad) was the one where she makes her brothers realize that, like them, she is a SEX demon, and if anything, “Con” will be the one appropriately used 😉 Yeah….they don’t like that image much.

Con was faster, and as he pulled her into his big body, tension sparked in the room again.

God, these guys were impossible. Lore had never been this bad, but then, he’d walked on eggshells around her because he felt so guilty about what had happened that one night so long ago.

He also realized she had succubus needs, something the Long Lost Trio seemed to not understand. Well, it was time to make them understand.

She backed away from Shade, and in a deliberate, sensual motion, she reached up and gripped the back of Con’s neck. “Look boys. You seem to think I’m some sheltered, sweet little virginal doll.” She scraped her nails across Con’s skin, and he hissed. Those fangs were so damn sexy. “But I’m not. I’m a Seminus Demon, Think about what that means.”

Yup. This scene continues on to produce one of the finest lines in the book (in my opinion). Tee hee!!

However, my most favorite moment (in terms of how deeply I was affected) again, includes the brothers, but in this instance, the scene was heartbreaking and real, and tore my heart in two.

Wraith, she realized, tucked her head against his chest as her world shattered into a million pieces.

Whoa. Just re-reading that whole scene…a must read for sure.

So read this! It’s a great addition to the series, and introduces us to what’s coming next. But it is best to read the series in the proper order to understand the intricate world and fascinating cast of characters that Larissa has created. 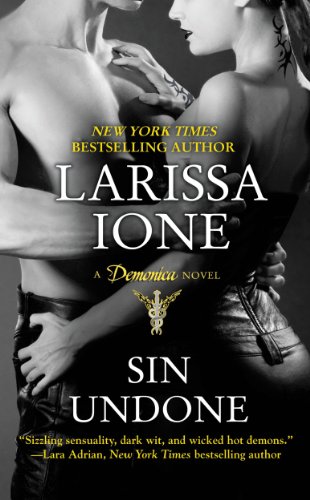 YAY!!!! What a fabulous review! Glad you liked it — you’ve kept me entertained! 🙂

Thank you for that wonderful series. I’m sad it’s over, but I’m anxious to start reading your “spin-off”.