Sins and Needles (The Artists Trilogy Book 1)
Okay so I fell in love three times this weekend, and we’ll start with two characters right out of this book. Well to be fair… one of the characters, I’m still in crush mode over one of ’em, ’cause I just realized something. I was so focused on one thing, that I was missing something else.

That fact alone turned this fast-paced, adrenaline pumping steamy story into a potentially heart-wrenching series to come. And by fast-paced, I mean car chases, the Vegas strip, bad boys and one very bad girl. With a love/hate relationship that started long ago and just picked up some serious speed. Amidst the chaos and mayhem, I have a feeling some hearts won’t get out alive (along with a few lives. Yep! It’s one of those).

Mob guys, and a gorgeous bad-girl who fits the lifestyle perfectly. Raised by “grifter” parents who taught her young, she’s suffered for a few of those sins in her innocence, and has since become jaded to the world as a whole. She’s got a life to live and she’s doing it her way, no matter who she takes down in the process (and all the while, she’s internally hurting for it).

She’d pretended that she’d never miss that piece of integrity she lost that day.

She pretended she had to do what was best for her, no matter the cost to others.

And she never looked back.

But you see, she’s trying to “grift” the wrong guy. Again. The game begins.

Ellie, back in her hometown for a temporary lifestyle reprieve (believe me, she needs it!), runs into a local gorgeous tattoo artist (and beautifully tattooed!)/guitar playin’ hottie “Camden” <— YES!! THAT is him!!! and now so many of us are trying to claim him!!! What’s a girl to do? Grrrrrrr OFF!!! Oh? That didn’t work? *sigh*

She realizes that this is her once upon a time “best friend” (only friend) from high school, and he has changed. Both were outsiders of sorts, and had things to hide. He was a hardcore goth,

He was the most bullied, most tortured kid in the whole of Palm Valley High School.

and she was… just the daughter of known “gypsies”. Criminals. Scum. Plus, his dad’s a disapproving cop with a very short temper.

“Ellie Watt. That scum of the earth, conning whore.” He spat out that word like it was lodged in his throat.

“Her parents made me look like the world’s biggest fool.”

She was offered an opportunity that was too hard to resist. She pounced. And well… maybe he never forgot it.

… she opened her eyes, she saw nothing but sadness in his. Perhaps he could already tell that she was going to ruin him.

Good “forgot it”? Bad “forgot it”? I’m not sayin’. I AM saying that this is a wild ride and I’m joinin’ it. I don’t care who shoots at me! Er… oh right. That shooting part? You see, once upon a time, she fell in love with an absolute HOTTIE bad guy. And I mean BAD GUY. But he and her were sooooo awesome together. Annnnnd things… happened. And she… “grifted” him, too. And nobody grifts Javier. NOBODY.

Now she’s on the run again.

Maryse: Listen. I think I might heart Javier a bit…. I heart CAMDEN for SURE!!! But Javier *spoiler* What kind of story might THAT bring us, you know? *spoiler* Now I’m rethinking this…

And I asked Karina (the author, herself):

Maryse: I was wondering if you had an actor/model in mind for Javier? He sounds amazing… and scary. And I kind of like how intense he is about *spoiler*. Sorry I’m weird. I like the scary guys in books (not in real life, though. At all.)

He exhaled. “So now it’s all making sense. You fell in love with one of the bad guys.”

“Don’t forget though, I’m one of the bad guys too.”

“Do you think because you don’t see my scars that they don’t exist? That’s the trouble with pain, Ellie. If you’re lucky, you can wear it for all the world to see. Most people have their pain deep inside, in places no one ever goes. Not until it’s too late. 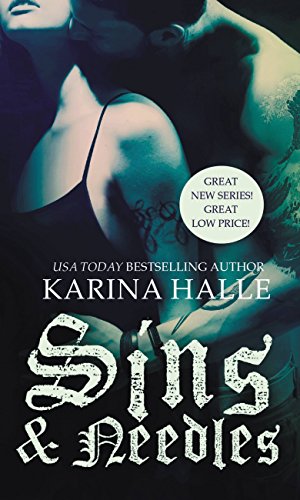 I’m dying to hear more about your thoughts for book two Maryse. I messages Karina today and she said she has the ending of two set but is figuring out the rest leading up to it. SO many diff ways this could play out. And I agree that I think it’s going to completely throw us for a loop.

Great book! Loved it!! Can’t wait to find out what happens all in the next book.

I just got Sins & Needles on my Kindle today and really looking forward to reading it next on my TBR list. But I have to agree with Christina…I need more Dex. And when I say I need Dex, I mean I neeeeeeed Dex, like NOW! But I’ll give Camden and Javier a chance. 😉

I dunno that anybody should give Javier a chance. Eeeeep! I have a “weirdness” about me for the bad guy, it would seem, so I of course… “like him” 😉 But then again… I’m thinking there’s more to his story, too.

I haven’t kept up apparently, who are Camden and Dex? Which books? I need a new book love! lol

Ok, blonde moment. That is what I get for skimming. I know who Camden is. ha! 🙂

Maryse maybe all of your recent exposure to Tony (everything is not as it seems) Rawlings has created a soft spot for Javier. Cuz you’re crushing on a serious bad guy! I hope we get more of his story too and can’t wait for book 2. For me, Camden is muscling in on Dex’s territory. I think it’s the glasses. 😉

For now, Dex still rules my world! I LOVE that sarcastic, cocky, obnoxious, intense (but deep down, totally sweet) guy.

Maureen, I think you’re right. Too much exposure to Tony has weakened my resistance to the villains. LOL!!! ACK!

I think there’s more to Javier than meets the eye. But he’s still NOT Camden. Is there a sins & needles board? Might want to start one. I have some things to discuss and bring up!!!

I just made it. I have a theory, so go here: https://talk.maryse.net/threads/sins-needles-by-karina-halle.904/

starting this book next:) thanks maryse, can’t wait to get to meet you at the book bash in June:)

On chapter 7 and i cant quite get into it. I love the plot but right now i need action. And right now they are playing that “figuring him/her” game out and its driving me insane!!! Maybe its just me and i am being impatient bc this is my attempt to seperate myself from Tony (*sigh*). But please tell me it gets better..right?

Finished this one yesterday and loved it. Camden is HOT. I loved him, I hated him, then I loved him again. I can’t wait for the next book 🙂

Ok ok. Spoiler.. What a sad upbringing. Camden is flawed like Ellie but he truly loves her more than anyone else could because he knows Ellie Watt like nobody else does. Yeah Javier may of been her first but he is bad, disloyal and too possessive. Camden should of been her first.. She was too afraid to give into her instincts back then. She paid the price. Her guilt ate at her. She just needed acceptance. To bad she didn’t take it from the one who offered it so long ago.

I just finished and DAMN THAT WAS GOOD! I even shed a few tears 🙁 I want more!!!

Just finished Sins & Needles today…I still can’t breath! That ending is killing me! I heard it was a cliffhanger, but I feel like I’m barely hanging on by a fingernail! Karina Halle is so skilled at giving voice to such beautifully flawed characters that we can’t help but cheer for, cringe for, and cry for. She is one of my favorite authors and Sins & Needles is a great example of why. Loved it! 🙂

I loved this book!! Not your average love story, but I am sooo loving it!

Yes ladies Dex is the man… BUT for this book…. CAMDEN is the MAN!!! Absolutely LOVED this story and could NOT put it down! Have to say that Karinna Halle is one of my most FAVORITE authors.

I did not realize this ended on a cliffhanger! Yet another book I can’t wait for!!! I’ll be moving on to every street to see if Javier can win me over. I don’t know if we can compare him to Tony because he is one of a kind…speaking of, do we really have to wait until 2014 for convicted? Ugh!