Something Wicked (Living in Eden Novel, A)
It’s safe to say that I was destined to love this series, considering the book cover. Yes. I am that shallow. 😳 It was great to not have to fight for the image of the hero to create itself in my head, for once. In this series, the image was so thoughtfully provided, and what an image it is!

Darrak, an unlucky demon forged from hellfire itself, is now stuck in the human world, because once upon a time, the wicked witch of the west (well, I don’t really know *where* she was from) snatched him out of his cozy abode in hell, and trapped him. Using him (for his body and his powers), she developed enough black magic within her that she was able to banish him when he eventually tried to kill her. Or so she thought.

His physical body was destroyed, but his “essence” remained. To continue to exist, he had to live within a human, over the course of a few centuries, while he searched for the witch to reverse the curse. A side effect to living as a “human”, caused him to eventually develop a sense of humanity. He may once have been a pure evil servant of Satan, but on earth, he has developed a conscience and a certain respect for those he used to torment.

However, now, to make matters worse, he has developed feelings. Specifically, feelings of love for his current host, Eden (a pretty semi-psychic woman). Because of her “power”, he is actually able to take physical form as long as he stays by her side. And despite her initial panic at being possessed, she was able to overcome it over the course of  book#1, and help him search for the witch, (instead of exorcising him from her life, and possibly killing him for good). She didn’t have it in her to destroy something, just because she didn’t “understand” it. Darrak seemed harmless enough, she believed his story, and in time they forged a friendship.

A deep trust between a most unlikely pair. Unlikely? Yes, highly unlikely considering they both just found out her biological “father” was (is) an angel. Heaven and hell is waging it’s own war within her.

So here they are in book#2, still trying to find out how to live separate lives. While both are so obviously into each other, they must resist. Part of the curse he carries includes an intimacy problem. No not that kind (he’s plenty fine there). Intimate contact with Eden mean she develops a little more of his black magic within her. Once the black magic is available, it’s hard for her not to use it. And using black magic means soiling her soul. Her pure, angelic, shiny, snow-white soul. Her soul is slightly tinged now. Yup. As you can imagine… Darrak is hard to resist.

Darrak and his old hell-buddy Theo have a plan (unbeknownst to Eden – you’ll see how that pesky Darrak manages it 😉 ). Theo’s going to help Darrak get his old life back (and that means also getting rid of those irritating “human” feelings that have been making him so weak and such a target in the demon world)…

“…I will move hell and earth to help break your curse and return you to your former glory. Do we have a deal?”

Was it true? If Darrak’s curse was broken, would he shed this heavy suit of human emotion he had begun to wear on a daily basis? No more guilt, no more second-guessing himself, no more strange attraction and affection for Eden?

It was almost a relief to think it was possible. No scratch that. It was a relief.

… and perhaps, together they can eventually take over Hell. Rule side by side, in all of their glorious evilness.

“So what do you say? Are we partners? Shall we take over Hell and leave those who oppose us in our bloody wake no matter how long it takes or how difficult it might get?”

Darrak give his friend a slow grin and felt his newfound power rising inside of him, itching to be used as soon as possible. “I’m so in.”

But what Darrak wants to want, and what Darrak actually wants are two different things. With the help of Eden, his old hell colleagues (one is especially surprising), and even his new human entourage (including his new enemy, Ben – the “other man” in Eden’s life) this story takes him on a wild ride as he explores who he is, and who he truly wants to be.

I like this series. While it is not full of steamy passion, and the kind of stuff that makes my jaw drop and my heart thud, it does have it’s moments. The few pages leading up to, well… you know 😉 Yah I like those.

“Just a taste,” he drew close enough to back her up against the railing. He stroked her hair to the side and whispered into her ear, “And is that all you need?”

I wish there were more of those “moments”, but what we do get is plenty nice, and anyway Darrak and Eden are trying to separate, not become more attached. Or are they?

I’m anxiously awaiting book#3 (That Old Black Magic (A Living in Eden Novel). By the way. Remember when I pouted over the “change of model” for it? Well. I was wrong. Same model, just a slightly different look. And thanks to the help of my friend Sherry, his feature will be coming soon 😉

4 stars! (and 5 stars PLUSSSS for that cover. *waggles eyebrows*) hehe 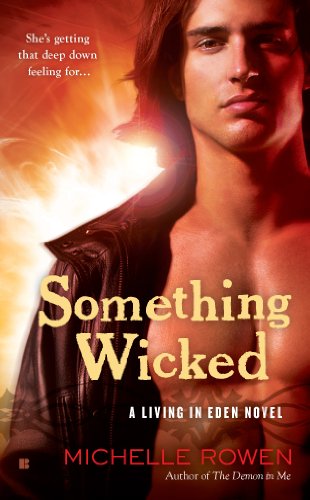 Yes,,this definately does sound like a good one…
another great review..