Sustained
This book is something else!!!!! Like… the BEST kind of something else. The perfect amount of EVERYTHING, with every single thing we fall in love with, in a love story. Plus… the perfect kind of funny, too.

This one had it all. I one-clicked it almost a year ago to this day, and now regret every day I haven’t read it, because it was EXACTLY what I LOVE and was in the mood for.

And YOU GUYS KNEW IT!! Whenever this book is mentioned, it’s a SURE-BET recommendation without hesitation!

Sharon: Sustained by Emma Chase. READ.THIS.ONE! it had me laughing out loud uncontrollably. I looked like a fool on the beach! I hated paying full price for it, but these Legal Briefs are worth it! I have no idea what to read next. Back to angsty? Something light? Thriller?

Ashley:  I FLOVED this book! And the audiobook is one of my top favorites!!!! I already own it, but it makes me want to reread it!

Jan: Ashley I liked Sustained too. Funny, sweet and hot. The kids are cute and so real too.

Julie o: Sustained is one of my favorites too. Love it. Just hearing about it makes me want to read it again!

Tracey: Sustained (The Legal Briefs Series Book 2) by Emma Chase is soooo funny . It’s from a male point of view and his inner thoughts had me in pleats.

Anne: I finished Sustained and loved it! Jake and Chelsea are perfect for each other and the kids were amazing! I liked this one better than Overruled

Maryse: Many were saying Sustained was better than the first one (I know someone here did not like the first one because of the a$$ hero – I think it was Lisa)?. But I received a ton of enthusiastic comments on Sustained…

Lisa: Yes Maryse….that was me who struggled with the book before Sustained because of the jerk H Stanton (who I still have the urge to throat punch just typing his name :/ ). I didn’t gel with any of the female characters either so it was a bust for me. But there’s loads of great reviews for Sustained…most loved it.

Julie o: Sustained was great, much better than the first book in series. It was funny and sweet. The H in first book was an a$$hole. I didn’t even finish it.

Cristina: …seriously laughed my a%$ off reading Sustained! I had tears streaming down my face. If you haven’t read it, please do! It centers around lawyer, Jake Becker. All male, and all hot. The dialogue reminded me of Emma Chase’s first book in her Tangled series. Ohhhh…… Drew Evans… *sigh*

Jake Becker meets Chelsea in this book. Chelsea recently moves to D.C. after her brother and sister-in-law pass away. She is left to raise her SIX nieces and nephews all by herself (ages 6 months to 14). She meets Becker after one of the kids pick-pockets Becker in a park. He catches the kid and drives him home to tell his parents.

There is a scene where Chelsea and the kids catch the stomach flu and Becker (having never raised a kid much less been around them), comes to Chelsea’s aid. I laughed till I cried! What makes Emma Chase such a great writer is these scenes are so close to real life. Unfiltered and messy. I read that scene out loud to my husband and we were both dying laughing. He said, “Man, that does sound like real life.”

Sharon: I read Sustained at the beach. It had me laughing like a lunatic! Loved the entire series!

Kate: Sustained was so good! It had me laughing out loud and was very sweet.

Maryse: OMG I already one-clicked Sustained!!! YAY ME. I have to bring that one back to the top of my list. I hate forgetting books I want to read.

Steph: Well, apparently I one clicked Sustained November 2, 2015 and never read it. lol I’ll be reading that next myself

Jan: Glad you’re liking Sustained Maryse. Everyone should read it. bev…….?????? Put it to the top of your tbr stat!

P.S. I just want to say now that I’ve met “Stanton” from the first book, in this one, and your hating on him for his jerk-facedness, I feel like I want to read his book badly, too! I’m a sucker for those, too. LOL!!!

But back to this one…

People kept mentioning THE kids. How funny the kids were. How they made this story… more. I can love kids in stories, but I often find kids are a bit over exaggerated in novels (or not quite true – to me anyway – to their age). But not these. And there were SIX of ’em. ABSOLUTE perfection on the “kid-front”. Hilarious, bratty, heartwarming, infuriating, goofy, and everything I expect in a story about a makeshift family that has to adjust in the face of tragedy.

…she grabs my face with both little hands, sliding one side down and pushing the other up.

“You’re kinda like that Sloth guy, Jake. You’re big and loud.” She gazes down at me thoughtfully. “But you’re not as ugly as him.” I’ll take what I can get. “Thanks,” I murmur though squashed lips.

*snort* GAH the kids!!! :P!!!! So real, so authentic, and with the Jake in their lives… absolutely hilarious. But not without its share of heartache.

Because what a tragedy it was. A sister of her loving, successful, altruistic brother has to say goodbye, but doesn’t even have the time to grieve, as she picks up the pieces of his beautiful, yet shattered family. After his death (and that of his wife) in a tragic accident, Chelsea uproots her life and aspirations to raise his six children (ranging from baby, to just-new-teenager). And she doesn’t think twice of it. She’s the most wonderful, giving loving soul, but not without her imperfections, and impatience (as to be expected when 6 children occasionally run amok).

And then she meets HIM. Jake.

A criminal lawyer (defense attorney) that has had his share of hard knocks in his own childhood, and received a few breaks to lead him into adulthood success (albeit, without its own set of difficulties and judgments). She meets him alright. But totally by accident, and only because one of her nephews messes up BIG time and HE’S the one that deals with him. But instead of turning in this potential juvenile delinquent to the police, he brings him back home to Chelsea, and lets her deal with him.

For the first time, I think about what it must’ve been like for her . . . after she got that phone call. How she probably raced around, throwing necessities in a bag, figuring she’d send for the rest of her things later. How she had to withdraw from school, probably break the lease on her apartment— upend her entire f**king existence.

And when he truly SEES her… and both of their worlds change in an instant.

The oldest girl— the one who hates her family— lets out a short snort of disbelief.

“Did you just ask her out on a date?”

And her cheeks turn the loveliest shade of pink.

Then it’s blond Shirley Temple’s turn. “But you’re so old!”

I tear my eyes from Chelsea’s blush to blast the kid with a grumpy brow. “I’m thirty.”

The grumpy brow fails to intimidate.

“Thirty!” Her hands go to her hips. “Do you have grandchildren?”

BUT!!!!! Not without that delightful slow burn. Seriously realistic “concern” to friends, to best friends… to so much more. But Jake never signed up for a girlfriend,

It’s not my problem. It’s none of my business. I have my own sh!t to worry about.

That’s what I tell myself as I put my phone aside, push my chair forward, and refocus on the document in front of me. On the hours of work I still have to finish tonight.

And then they die.

As houses burn to the ground.

Cheryl: Maryse, you definitely are selling me on Sustained. Sounds like just what I need in between all the yard work I’m doing this weekend!

bev: Ok, now I want to read Sustained. It’s been on my tbr for awhile.

And yet… sooner than later, he finds himself so fully ingrained in their lives,

I’m not going to tell the others, but I think he’s my favorite.

…even though he desperately wants anything BUT that.

5 FREAKING AWESOME STARS!!!! This one was perfectly well rounded, completely realistic and unrushed, and wholeheartedly charming and hilarious. My perfect romance read! 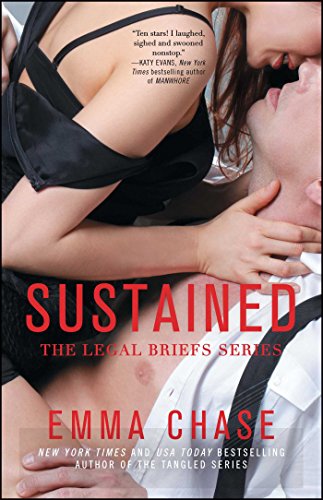 I bought this book in 2015 and it’s still sitting in my TBR… After this review I’m definitely bumping it up. I can’t believe I haven’t read it? I looove lawyer books (while secretly wishing the hero would turn up at my office haha).

Yay Maryse. You’re making me want to do a reread!

Maryse
I hate to say this but
I told you so! I remember mentioning this book right after it came out. Read the first one and did not finish but liked the secondary character Jake. So tried his book and was so glad I did. Now if I could just talk you into reading Years by LaVryle Spencer!

I’m so excited that you loved this book! It really is one of my go-to reads/listens. It’s the perfect romance – smart, funny, enchanting and funny (yes, it needs to be said twice!). Now you HAVE to read Sidebarred!!!! (And it’s only .99 cents right now on amazon). You get glimpses (great ones) of Jake & co. in Appealed but Sidebarred is all about them.

I loved this one!!! Swoony H and the kids were hilarious.

So glad you loved this book. Those kids! Jake was such a natural. I think you would have loved him more if you read all of the books! Go and read the entire series! Loved them all!

I’m the one that purchased Nov. 2 and never read. Oops. I’ve now read it and LOVED it so much. The fourth word “Jake” was the sweetest and one of my favorite parts. I’m wondering if I paid 8.99 ’cause I’ll admit I’m pretty cheap but it was worth it if I did.

Can’t wait to read this one!