Tall, Dark & Hungry (Argeneau Vampire Book 4)
I finished this series a while ago, but it appears, despite my loving the series, that I am not as quick with the reviews 😉

This too, was one of my favorites in the series, simply because the element of enemy danger was left on the back-burner in this one and we were treated to a more relaxing version of finding love, amongst life’s daily disasters.

Bastien Argeneau, head of the clan and essentially the “man of the house” always finds himself cleaning up his family’s messes, and handling the business side of their lives. It was fun to see this sexy but serious, no-nonsense vampire find himself in uncomfortable situations, all the while trying to deal with the new emotions of encountering his human potential “lifemate”.

Basically, Lucern and Kate are preparing their wedding, and Kate (and of course, Lucern) are called away on emergency, in the final stages of the wedding planning. Kate’s editor Chris has just had an accident and broken, both his apartment, AND his leg, and requires a place to stay. Kate’s cousin and maid of honor (Terri) has just flown in from London (and had been scheduled to stay with Kate), and Vincent, (Bastien and Lucern’s vampire cousin) has just popped into the Argeneau’s family penthouse for an extended visit. Bastien (usually a loner) who lives at the penthouse full time, finds himself host to all three guests.

While he is thrilled to have Terri stay with him…

“And you-” his attention shifted to Terri, but one glimpse of her soft eyes, and even softer-looking lips made his businesslike attitude disappear. A smile curved his lips again, and his voice was noticeably gentler as he said, “Just sit down and relax, Terri. I’ll be back soon with dinner.”

…he is non too pleased with the male “squatters”. To make matters worse, Vincent’s (the Argeneau cousin) unconcealed “feeding habits” (including tasting Bastien’s maid), eventually freaks the maid out enough to make her quit – this whole section is hilarious!

Attempting to keep his family’s lifestyle a secret, in the presence of human company, (while keeping Vincent from snacking on any more guests), puts Bastien in a tailspin. Trying to make sure everyone is fed regularily and cared for (in whatever way they need to be),

“Vincent,” Bastien said with exasperation, “which takeout foods are healthiest?”

“Subs,” Vincent insisted. “It’s got your four basic food groups. or is it five?” Raising his hand, he began to count off fingers. “Dairy, bread, meat vegetables…I think there are four for humans.”

proves to be a bigger challenge then expected. He also finds himself having to make final decisions (with Terri) for his cousin’s wedding preparations (which also keep proving to be disastrous).

That was when Bastien realized that fate had just turned everything upside down. His orderly life was gone, and at that moment he really wasn’t sure if he’d ever get it back. At least not before Lucern and Kate’s wedding.  How long was that? Oh, yes. Two weeks. Fourteen days of hell before his life might get back to normal.

How had this happened he wondered, with a combination of dismay and confusion. Things like this simply didn’t happen to him. He was the details man-he didn’t have problems, he solved them for everyone else.

This book is just plain fun! Lots of funny scenes, and moments that you can really relate to (tons of bad luck, but all in harmless fun). Romance, of course runs deep in this installment (and contains the much needed turmoil that makes our hearts pitter-patter in anticipation).

Bastien lifted his head slightly and pressed a kiss to her lips, then drew her head down to his chest and continued to simply hold her. His hand rubbed soothingly over her back, caressing her soft skin. She felt her eyes droop closed; then he murmured, “Thank you.”

Terri blinked her eyes open and raised her head to peer at him. “What for?”

“For this,” he said simply. “For giving me the greatest pleasure I’ve experienced in my life.”

The Argeneau’s prove to be even more endearing then in past installments. Bastien is the sweetest, and his gentle ways with Terri are heartwarming. Vincent, too, is simply adorable, and while this is not his story, it will make you anxious to get to know him better. Read it!! 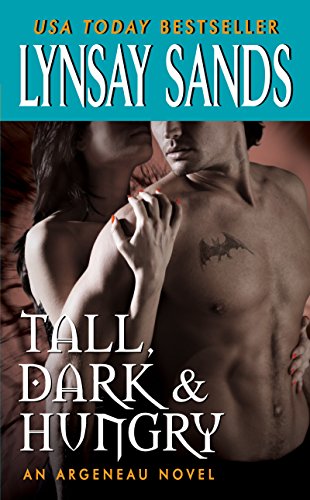 I finished almost all the books, except this one, I cant find it, but I have all the rest of the series……I wish I can find this one, I love the Arganeous series and I am ready for the next to coming up in Sept. and Oct. I finally enjoy my reading, even my kids dont bother me once I sit, they say I smile more offten………

Hi Nilse! If you click on the picture in this post, it will bring you directly to the book on Amazon. Hope this helps!

I know what you mean about the reading and smiling 😉