Tempt (Take It Off)
Well… I read it. I found out about it last night, the synopsis had me leaping with joy and I immediately moved into my #1 spot ’cause I was so in the mood for what this looked like it could be.

My mind was already enthusiastically imagining all sorts of scenarios. I had a feeling this would either tear my heart out (two men, one woman, stranded on a deserted island). Would there be intense love via a bonding trio? Care and devotion and social “norms” thrown out the window? And what would happen if they were rescued? Or never rescued? Or could there be intense jealousy and hurt turning it into a dangerous trio due to feelings of betrayal? I was anxious to play it out, with them.

Or would it be crazy intense in terms of survival (stranded on a deserted island – working out their difficulties and the dangers of starving, dehydration, the elements, diseases… a la “On the Island” & “Surviving Raine“?). Of course, there HAD to be some of that, right?

Or would it end up being a super-steamy guilty-pleasure? A great excuse to *ahem* let your imagination run wild with no regrets or guilt to their “environment” (after-all, what else was there to do)? And then maybe some bonding and super-romance, too?. 😉

I was sure it would be a mix of all three.

Ava is flying to Puerto Rico to spread her grandmothers ashes, and the tiny charter plane that she’s on crashes in severe weather.

He was trying to protect me. Tears leaked out of my eyes and fell onto the cold, hard floor of the plane. Nash started speaking softly to me. In Spanish. The cadence of his words was like a song. I didn’t bother to ask him what he was saying. I didn’t care.

She, and her cute pilot (Nash) were the only ones on, and they survive the ordeal, only to realize they are stranded on a deserted island. Living in half of the plane, they depend on each other for comfort, and their bond is quick (understandably so). As they begin investigating the area for food and water they meet another person on the island that has been stranded there for months (fishing boat issue). He’s handsome, skilled, and gentle.

I was beginning to realize that Duke was a wealth of skill and information. He could very well help us survive out here.

And he has an obvious eye on Ava. Their story evolves from there…

Of course, deep down, I was hoping for deep and intense and a bit crazy. I was hoping we’d get to explore the difficulties and intricacies of learning to survive, and live again, after such a disaster. But this one proved to be more of a “sweet-candy” romp, than my usual books. A quick read that somewhat touched upon all of the things I imagined above, but nothing too serious or intense. In fact, considering the dire circumstances, I was often taken aback at the nonchalant, flighty thoughts the main character would have. And where her priorities were. Yep. Things were mostly “easy-going” even with the danger(s) that they faced.

It did have a surprise twist that I didn’t see coming (and lemme tell you, I’m still struggling with that surprise). And some of the romance scenes certainly had it’s *steam*, but overall, I’m somewhat disappointed that I didn’t get wrapped up in this one as I would have liked (mind you, I did pretty much, finish it in one sitting).

Things were hinted at, that certainly gave me moments of guilty-pleasure anxiety (and kept me reading intently), but at only 220 pages, there wasn’t as much time to “live” in the moments of a story with this much stuff going on (smooth sailing and then weird and crazy). I couldn’t really experience them, worry about them, ache with them, fear for them or even love them (although… I certainly did have my moments of butterflies). ;).

To me, it felt… too easy, too fast, too sweet, too… “already over”. It wasn’t what I thought I was getting into.

3 stars —> If you’re in the mood for something intense, amazing, deep and emotional, and this synopsis had you so excited that you chose it as your next read, you might come out of this with a 3-star or less, feel (I’m still mulling it over). However, if you’re in the mood for a quick read that is light, steamy and a touch crazy (’cause of the circumstances), then maybe more of a 3 star (or more?) rating. I guess it depends on what you’re looking for. 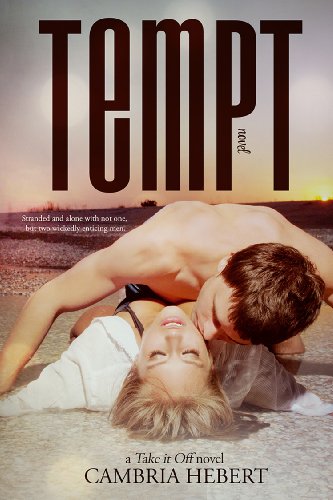