X
You are here: Home / My Book Reviews / Book Review – That Guy by Kim Jones

That Guy
I read this one straight through in one shot. Started this morning, just finished it now, and I am thrilled with it! I KNEW going into this, by the recommendations I received, that this would be a laugh-riot (and of course, anyone that has watched the FaceTime videos that Kim Jones posts, you KNOW you are in for some possibly crude, yet hilarious humor).

I just LOVE her unabashed thoughts, and just how funny she can be in her delivery, so I knew this was going to be a touch of that, at the very least.

Fiona: Just read a book yesterday by Kim Jones called “That Guy” its so funny; about a girl Penelope who basically stalks this venture capitalist yeah he’s loaded!! She ends up in his apartment in Manhattan by mistake; he thinks she’s an escort. She’s not but she is in NYC to get back at her friends boyfriend who is a male hoe! By leaving dog poo on his front porch & put it online; she’s arrested for this…I know its great!!

Anyway going off track here Jake Swagger!! The lead asks Penelope to be his date to give the impression to his grandad that he is reliable etc; the story evolves from here.

Very funny one liners…they are like chalk & cheese the H & H but are so good together; some of the scenes are so funny like when Penelope is at the posh party & she cant find anything to eat!! It reminds me of Penny Reids’ books from the Knitting Series. …Peed myself laughing…would recommend this big time…

Melinda: Also I just read “That Guy” and loved it. Really enjoyable and funny.

TashaJ: Well, I didn’t stop reading it once I started. It was hilarious! I like how it pokes fun at the usual romance tropes and yet still manages to play out a lot of them and not be too corny, but funny. There’s a lot of cursing and probably some more crass moments, but I didn’t even mind. Sometimes that stuff annoys me. I loved the crazy heroine and “that guy”. Lol, the anger from him was so good. I have country family, and some of the stuff she says totally fits in with them. Haha..The “watermelon crawl” song is now stuck in my head.

Barbara:  So funny, I read it twice.

Lori: Great book! I couldn’t put it down!! This is the first book I read by this author. I look forward to reading more books from Kim Jones!

Michelle: Had so many recs that I had to try it out and loved it. So hilarious.

Carin: So funny and different from her other stuff

To be honest, this wasn’t all that crude, but it had me in stitches. This is comedy romance done right! The main character tells us ALL the way through exactly what’s gonna happen (she’s a romance author, she’s looking for a billionaire muse, and is insistent it MUST turn out the way she knows it HAS to. She knows – and LOVES predictable HEAs), and sure enough…. she’s got it right. But not without her share of pain, and turmoil and hilarity to make it its own.

Penelope has flown from her small-town Mississippi life to the city of Chicago to avenge her very best friend, who’s been dumped by a cheater. She’s always looking for a cause and of course, can’t help but get herself into trouble decides she’s going to do the “burning bag of poop” bag trick on her best friend’s ex, (since he’s so utterly grossed out by all of that).

But on her journey (running from the dog-poop’s owner she just stole), she leaps into a parked limo, and in a case of mistaken identity, is driven to a Penthouse apartment that awaits… her (or somebody, but she’s willing to go along for the ride). 😉

This is so worth going to jail for.

If the rest of this place is as miraculous as the view, I might have to stay until Mr. Swagger gets home. Then I’ll make him fall in love with me. Shouldn’t take long. I’m a good catch.

‘Cept… it’s not for her at all, but hey! Who’s she to turn down a good opportunity obviously delivered by the Lord himself to help inspire her next romance story? Right? So she lets herself in… and makes herself comfortable. That is until “That Guy” (the very guy she has been envisioning MUST live in a place like this) shows up.

Oh yes. He’s perfection. Handsome, tall, sexy, brooding, and the ultimate billionaire. Everything she was hoping her new character would be. Except for one thing. He’s NOT acting like she expected her sexy debonaire Hero would act. He’s not intrigued by her, not entranced by her, not attracted to her and not one bit curious about her… at all. In fact, he’s incensed!

He might explode again.
You know how in romance novels the heroine always just “knows” the hero would never hurt her? Like she can sense it about him or something? I’m looking for that in him. Not real sure I’m finding it.

Because OMG he is FURIOUS!!!! And he wants her OUT NOW.

…his jaw twitches. And his neck is red. This little vein in his forehead appears above his right eye.

How strange is it that his voice is so very calm when he is literally shaking with anger?

“You know, I’d be happy to stay for dinner,” I offer, even though it’s three in the morning.

His body stiffens. He gapes at me as if I’m mad. I’m not, really. I’m just an opportunist.

LOL!!!!! She totally is an opportunist, but it’s for inspiration’s sake!!! That said, this girl has been driving her mom wild all her life with her antics and the crazy hijinks she comes up with, but I can’t help but love her self-confidence and shamelessness. Oh I shake my head in shock and awe (I would NEVER have the audacity) but she makes it work. *snort* 😛

And yet, no matter her gumption, she still has feelings and moments of insecurity…

The urge to cry is strong. I want to sob. Break down. Let go. But I can’t. I refuse to be weakened by this man’s words. If he threw me through a window or rammed my head through the T.V. screen, then yes—I’d cry.

But shed a tear over hurt feelings?

And so starts the story of how the shameless and quirky Penelope endears everyone to her (no matter the ripples she leaves in her wake) except for the very man she can’t resist (and that seems to totally resist her). That is… sometimes.

You guys. This is a MUST read!!!! Sweet, funny, delightfully predictable, and yet full of its own personal quirks and touches that makes this one unforgettable. It had me laughing out loud MANY times. And that ending.

OMG THAT ENDING!! It made me cackle with delight, ’cause… well. You’ll see. 😉

P.S. Her hilarious river dancing antics had me in tears… and of course… the box fan cameo. 😛 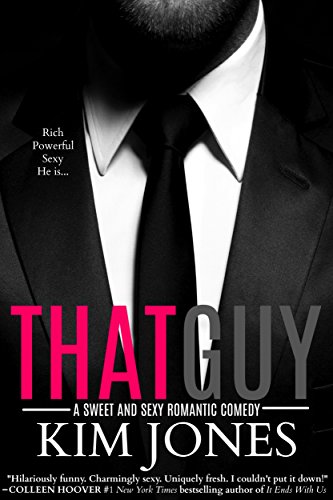 Yay, so excited to find your review! I have been on a rom-com kick. Just finished Accidental Tryst which was really awesome. And I’ve been digging around looking for another good one and found your review!! Was going to start The Naked Truth but might do this one first.

DO THIS ONE MARINA!!! It’s exactly what you’re looking, for I’m sure of it!!!

This sounds so good, got to bump it up the TBR.

I need this one!

Oh. My. Gosh. Just finished this book and I want to cry because it has ended! I laughed and swooned so hard! Definitely my kind of funny. I’m totally fangirling Kim Jones now! Ha! I hope she continues to write comedy like this! ♡