The Accidental Vampire (Argeneau Vampire Book 7)
I’ll admit that my reviews on this series may not be in the proper reading order (woops!). This is book 7 in the series. To be honest, while it is *best* to read this books in order, (references about past couples and events appear throughout each new novel), these are easily read and understood as stand alone books. How vampires are created is explained in each installation, how a “lifemate” is discovered, and the cast of characters in each book are described (in reference to the Argeneau family).

This book features Victor, a 2000 year old “Immortal” (a vampire – but they don’t like to be called that). He is the younger brother of Lucian Argeneau (one of the oldest Vampires , and head of the governing council), and Victor is one of his enforcers (sent to hunt down rogue vampires not abiding by vampire law).

Victor is sent to a small town in Ontario after hearing rumors of a female vampire (Elvi) living openly as a vampire amongst the mortals, and feeding off of them. She is also discovered to be publicly searching for a “vampire” mate in the singles column (all of which are against vampire law – namely, “Immortals” must keep their status a secret, except to the mortals that are close to them, and feeding from mortals is against the law, except in cases of emergency).

Under the guise of answering her “singles” ad, he arrives in town, only to discover that he will be one of 5 males living in “Elvi’s” home (a Bed & Breakfast), so that she may get to know each one better, and possibly choose one as her mate.

To Victor’s dismay, he is incredibly attracted to this sweet woman. He realizes that she has no idea how she became a vampire, has never had a “Sire” to guide her and teach her the laws, and that the town she lives in accepts and fully embraces her vampire status. She is not openly disobeying the law, as she has never known another vampire. In fact, she has learned how to be a “vampire” by watching old Dracula movies, and is living the vampire myths.

“We can eat?” Elvi echoed faintly. It was really the only thing he’d said that stuck in her head. “I can eat?”

“You didn’t know?” DJ asked, his teeth now back in place.

“Dracula never ate,” Mabel pointed out, confusion and concern on her face as she peered at Elvi.

Her well-meaning mortal friends are realizing that as they age and die, she will be left alone, and therefore, devise this “singles ad” plan (unbeknownst to her). Elvi is embarrassed when she realizes what they have done, but is so happy to meet other vampires, that she entertains the possibility of them at least, becoming her new friends. She finally has people to answer her questions.

“Mabel and I arranged this week to find you a mate,” he started as he steered out of the parking lot. “We don’t like the idea of leaving you here on your own.”

Teddy nodded. “Well it seems we did good. Out of all the vampires in the world, she picked the four who would be suitable lifemates.” He paused, and concentrated on driving for a minute before saying, “Elvi, if you love this guy, don’t let your fear keep you from him. You’ll regret it. Trust me, I know,” he added solemnly, and then said, “You’re  home. Get out.”

“That’s it?” she asked with disbelief. “Don’t let fear stop me. We’re home, now get out? That’s your wisdom?”

“The best advice is often the simplest,” he said with a shrug…

This book has a bit of everything. The usual humorous moments (my favorite was an unfortunate birdbath colliding with a male groin, incident – apparently vampires DO feel pain…). There are also a few romantic couplings that happen in this installation. Some fun tension while the handsome vampires vie for Elvi’s attention, and even some stress as to how Victor will submit her case to the council for re-evaluation.

This book certainly fits well within the series, and does not disappoint! 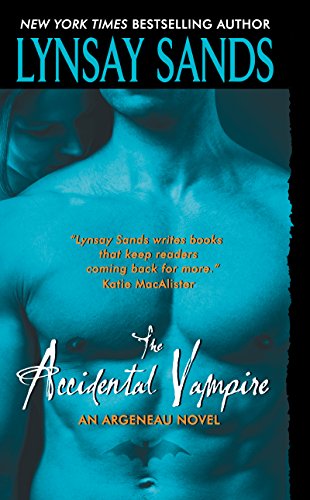 I absolutely LOVED this series!! I wish it could continue on & on!

I love the series, but is The Accidental Vampire being released on kobo? like the Vampires are Forever!

Hello Lisa! I’m not sure, unfortunately, but I’d recommend contacting the publisher directly and letting them know what e-reader you use to read her books.

Hello,obviously u know my name,and i want to say that its nice to meet u but lets be straight here,im a huge,enormous fan of JEANIENE FROST(sorry,i just had to letcha know)Anyways..im just starting on lynsay sands books,but ONLY cuz i got a bit impatient waiting for jeaniene’s next book to come out to stores.now,ive read the book with jeaniene and lynsay and i loved it,well as much as u can with how short the book was(the bite before Christmas)Anyways,my question to u is this: Lynsay Sands has i guess 17 books ready for me to buy,which i do intend to buy ALL of them all at once,but…not unless someone helps me please…CAN U OR ANYONE EMAIL,CALL,OR EVEN TEXT TO ME THE BOOKS OF LYNSAY SANDS BOOKS…IN EXACT,COMPLETE ORDER,CUZ ONCE I GET THEM ALL IN COMPLETE ORDER SAME AS JEANIENE FROST DID WITH ALL HER BOOKS,THEN I WILL GO BUY THE WHOLE 17 BOOKS.NOW I SEE THAT THE LAST BOOK IS STILL PENDING OR ISNT COMPLETED YET?(immortal ever after)BOOK 18…THATS FINE,BY THE TIME I READ THE OTHER 17 BOOKS”IN ORDER,HOPEFULLY”…THEN BOOK 18 WILL MAYBE BE OUT IN STORES BY THEN,THEN AGAIN,WHO KNOWS,IM STARTING TO FINISH NOW A 500 PAGE BOOK IN LESS THEN 4-5 DAYS,LOL.GOTTA KEEP READERS LIKE ME…BUSY,BRING ON THE BOOKS,LADIES!!! I hope to hear back from u maam.in that being said,take care,god bless and be with u always and have a great day and for gosh sakes,dont forget about me,my comment,message to u…cuz,I WONT!!! Thank you and if i haven’t said please….well,i just did.lol.